How Should America Respond to China’s Deadly Missile Arsenal? 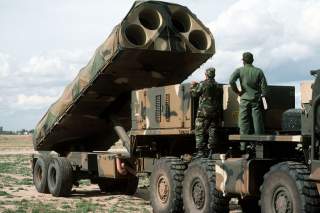 How should the United States respond to Russian noncompliance with the Intermediate-Range Nuclear Forces (INF) Treaty? For more than twenty-five years, this landmark arms-control agreement has prevented both nations from fielding surface-to-surface ballistic and cruise missiles with ranges between 500 and 5500 kilometers, whether they carry conventional or nuclear warheads. In late July, the State Department publicly revealed what the press had been reporting for some time, namely that Russia has violated the treaty by testing a prohibited weapon.

Suspicions of Russian cheating, along with official confirmation of Moscow’s transgression, have led to a flurry of articles outlining what the United States should or should not do in response. For instance, I have suggested that Washington consider modifying the treaty to permit the deployment of intermediate-range missiles in Asia, while continuing to bar their deployment in Europe. Unconstrained by INF, China has amassed a large arsenal of missiles that would be captured by the agreement if it were a signatory—missiles that pose a significant threat to U.S. theater bases and forward-operating forces in the Western Pacific. By pursuing similar weapons of its own, the United States could bolster conventional deterrence and enhance crisis stability. In a modern twist on the original “dual track” approach that characterized the deployment of intermediate-range missiles to Europe several decades ago, it might even gain leverage over China to negotiate limits on its offensive forces.

In a recent article here at TNI, Matthew Hallex criticizes this argument. In his view, altering or abandoning the INF Treaty and developing missile forces that are currently proscribed by it would be a bad move for Washington. Not only would these weapons have little utility, but they could also come at the expense of capabilities with greater value.

Would the deployment of intermediate-range missiles help to prevent conflict? According to Hallex, these weapons could be destroyed easily if they were deployed in the first island chain, and therefore are more likely to tempt aggression than deter it. In fact, he argues that they would be just as vulnerable as U.S. aircraft stationed at theater bases in Okinawa. This is a curious claim, because one of the chief virtues of ground-based missiles is their survivability. For instance, even without the cover of active defenses, missile forces can be stored in hardened shelters or silos. Unless they are put in forward-operating locations with no protection at all, it is difficult to believe that they would be as vulnerable as aircraft on the ground, many of which are parked in the open or kept in fragile hangars.

Hallex also disputes the idea that mobility can contribute to survivability, because most potential operating locations in the region are small and crowded. Yet some islands, such as Kyushu and Luzon, are quite large, and although deployments there might seem implausible today, that might not always be the case. Moreover, it only takes minutes to break down and relocate a road-mobile launch platform after it releases its payload, and those minutes can make all the difference, even in relatively confined areas. It is worth noting that Japan has already deployed antiship missile launchers to some of its more remote Southwestern Islands during military exercises. As Toshi Yoshihara has written, these road-mobile platforms are ideal for sea denial, in part because they can “shoot and scoot.”

Intermediate-range missiles—whether they operate from fixed locations or rely on mobility to survive—are not a silver-bullet solution to China’s growing military power. But they can complicate its planning and impose significant costs. Destroying hardened storage facilities would likely require missiles armed with unitary, penetrating warheads, rather than the small submunitions that pose a major threat to unprotected aircraft. That means China would have to deplete more of its own intermediate-range missile inventory to degrade U.S. combat power. In addition, neutralizing mobile targets is extremely difficult, as the United States has discovered in the past. Holding them at risk could require persistent, wide-area surveillance systems; loitering strike platforms or standoff munitions that can be retargeted in flight; and the command-and-control infrastructure to rapidly transmit information between sensors and shooters. Any and all of these capabilities would come with a large price tag. Confronting its own missile threat, China might also have to invest more in expensive defense countermeasures.

Rather than developing new missile forces, Hallex argues that the United States should double-down on undersea warfare and long-range strike. Indeed, these areas are incredibly valuable and should be priorities for U.S. defense investment. They do have their limitations, however.

Submarines, for example, are useful in contested environments because they are hard to detect. But they also have shallow weapons magazines, and this constraint will only be magnified as they are tasked with more and more missions. Bombers have many virtues as well, including the ability to operate from distant bases that are beyond the reach of most enemy air and missile forces. Yet they are few in number, especially penetrating bombers, and often rely on support assets that operate from vulnerable close-in bases, including refueling aircraft and electronic warfare platforms. In addition, while I agree with Hallex that both of these capabilities can impose costs on competitors, it is not clear why we should expect more cost-imposing “bang for the buck” from capabilities we already possess (and that China now takes into account) than capabilities we do not yet have (and that China does not currently need to defend against).

Finally, pitting ground-based missiles against other strike options represents a false choice, for two reasons. First, all of these capabilities are complementary. For example, the former could enhance the amount of combat power that the United States has in theater, while mitigating the opportunity costs that will arise as its dependence on undersea assets and long-range strike platforms continues to grow. Second, it is the Army—not the Navy or the Air Force—that is the natural candidate to acquire and operate any new ground-based missile forces.

In the end, Russia’s violation of INF raises complex questions about the fate of the treaty and the future of arms control. But it also creates an opportunity to reconsider the virtues of military capabilities that the United States abandoned long ago—capabilities that could have value once again.

Evan Braden Montgomery is a Senior Fellow at the Center for Strategic and Budgetary Assessments.