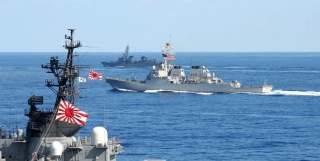 SEEN IN historical perspective, a Western-dominated world represents a recent phenomenon. Not until the fifteenth century did the gap between the West and the rest start widening dramatically, with the Industrial Revolution, which followed much later, serving as the critical accelerator. For centuries before that, the centers of cultural splendor, wealth and scientific achievement lay in the East. Asia accounted for nearly 60 percent of global economic output as recently as 1700. Its position declined steadily thereafter, but started regaining ground in 1980. China’s remarkable post-1978 economic resurgence, along with rapid growth in South and East Asia, ranks among the most significant changes in the international system in the last three decades. This does not necessarily betoken the West’s marginalization. Still, the change in Asia’s relative standing has ended the long era of unrivaled Western preponderance—and the trend will persist.

In the near term, the United States will continue to possess the world’s largest economy, and by an overwhelming margin: a $17.95 trillion GDP in 2015, according to the World Bank. China, its putative challenger for global primacy, registered a second-place GDP of $10.87 trillion. Japan occupied third place with $4.12 trillion—less than one-fourth of the American economy. The disparity favoring the United States becomes starker still in the military realm. Its 2015 defense budget totaled $596 billion; China’s, the world’s second largest, was $141 billion. The same picture—American preeminence—comes into relief if one turns to venture-capital investment (the global share of the United States is 70 percent), social-media use (about 60 percent) or spending on research and development (about 25 percent). While American foreign policy raises hackles in many parts of the world, attitudes toward the United States remain positive in several respects. In Asia and elsewhere, America still retains considerable appeal as a place to live. The allure of its culture and lifestyle in other countries is readily apparent (if not always aesthetically pleasing), and its universities remain peerless in quality and reputation, attracting thousands of students (975,000 over the last two years) annually from across the world. The American model of liberal democracy does not lack for critics, at home and abroad, and its failings have occasioned much comment lately, but its worldwide influence remains undeniable nevertheless. It does not face a challenge from an alternative political model with global appeal, whether Chinese, Russian or Japanese. In short, America leads in the fuzzier, soft forms of power as well.

To be sure, the United States does not dominate across the board in power-relevant indices. In some, its relative position has declined since the middle of the last century; in others, China has emerged as a competitor. The U.S. share of global GDP has fallen from about 20 percent to about 17 percent in the last decade, whereas it was around 30 percent in 1950 and 25 percent in 1970. But the loss of relative standing was unavoidable as Europe and Japan, demolished by World War II, recovered—and, in no small measure, because of American protection, aid and investment. For decades, technological innovation was an American preserve, and in many ways that remains true; but the picture has changed of late. Consider one indicator: annual patent filings. China led the United States in 2013, though the latter reclaimed first place, and by a sizable margin, in 2015. With start-ups mushrooming, a massive internal market and consumers with growing purchasing power, and generous government financing for research and development, China now makes products once monopolized by the West, Japan and South Korea. India seems poised to follow suit, albeit at a slower pace.

Given the magnitude of its effect on the international order, China’s economic transformation merits special attention. The breakneck pace of Chinese economic growth since the 1978 Deng Xiaoping revolution—on average 10 percent annually—has eroded the advantage the United States enjoyed in East Asia for more than half a century. This trend will continue unless China experiences a prolonged economic crisis or deep political upheaval. If the GDP comparison is made in purchasing power parity (PPP) terms, China ($19.5 trillion) edged out the United States ($17.9 trillion) in 2015, a significant achievement given that Chinese GDP (based on PPP) was less than $1 trillion in 1980. Measured in constant 2000 U.S. dollars, Chinese per-capita income soared from $165 in 1978 to almost $7,000 in 2013. It is difficult to deny the shift in the economic balance of power in China’s favor. Yes, China’s growth rate started to slow in 2014, but most countries would envy even the lower growth rate, 6.8 percent in the first quarter of 2016.

In 1980, China accounted for only 4 percent of global economic production, the United States for 22 percent; the present proportions are 16.3 and 16.1 percent respectively. As recently as 2006, the United States was the top trade partner for 127 countries, China for seventy. By 2012, the figures had flipped: China, 124; the United States, seventy-six. By 2013, China had surpassed the United States as the world’s top trading country, with $4.2 trillion (exports plus imports) to America’s $3.8 trillion. China, which has the world’s largest foreign exchange reserves ($3.3 trillion in 2016), holds $1.2 trillion in U.S. Treasury notes, 7 percent of America’s staggering national debt (close to $18 trillion). And U.S. dependence on Chinese credit does not look poised to abate. The Congressional Budget Office estimates a 2016 U.S. government budget deficit of $544 billion.

Though America’s defense budget dwarfs China’s, the gap has been narrowing. China’s military spending (again, the world’s second largest) exceeds Russia’s (the fourth largest) twofold. Its military budget was just 2 percent of GDP in 2015, compared to 3.3 percent for the United States. Though there is a vast disparity between Chinese and American defense spending, personnel costs in the United States are higher, accounting for a much larger proportion of military spending than in China. And the United States has a global military presence, which China still does not. The flip side of the United States having many more valuable strategic partners than China is a multitude of far-flung commitments. A comparison of aggregate defense spending may therefore obscure the extent to which China—by purchasing vast quantities of Russian weaponry starting in the early 1990s, modernizing its own defense industries and investing in electronic- and cyber-warfare capabilities—has, at minimum, increased the price the United States must pay to prevail in a confrontation with Chinese forces in East Asia.

POWER HAS many facets and is not a singular asset that can be applied successfully across differing contexts. Some forms of it matter in some situations (bombers are important in war), but not in others (bombing potential trade partners during negotiations tends not to advance your cause). Economic and military dominance, no matter how impressive, are not panaceas; contingent circumstances can reduce, even nullify them. And advantages that are hard to measure, such as morale in war, can prove crucial. Were GDP and military muscle consistently decisive, the United States would have won the Vietnam War quickly; instead it lost to a country far weaker in all the principal measures of power. Those same limitations are evident in Afghanistan and Iraq.

Nevertheless, to the extent that quantifiable sources of power matter—and they do—America’s international position seems unlikely to be surpassed for a decade, if not longer. China still faces a steep, long climb and must surmount daunting obstacles along the way. Its aging population will reduce its tax base while requiring increased expenditures for programs that support retirees and the infirm. The already-apparent dissonance between a dynamic Chinese economy and society and a restrictive political order will increase. China’s state companies are debt laden. Its debt-to-GDP ratio now approaches 282 percent, total national debt having ballooned from $7 trillion in 2007 to $28 trillion in 2016. The ill effects, including public health costs, of pervasive pollution, are mounting. Severe water shortages will persist.

China will also be forced to jettison its staple economic strategy of adding labor (from the countryside to factories) and capital to achieve high growth rates in favor of one based on innovations that increase output per composite unit of labor and capital—what economists call “total-factor productivity.” But China does not fare well on this particular measure: its total-factor productivity growth has dropped steadily from an average of 2.7 percent in 2007–12 to -0.1 percent in 2014. Prognosticators expect that China’s GDP will exceed that of the United States in the years ahead; but in per-capita terms, China will remain a middle-income country at best. The slowdown of Chinese economic growth since 2014 makes for additional uncertainties, economic and political.

While GDP has become a standard index of power, a relatively new measure, inclusive wealth, weighs the full array of assets—financial, manufactured, natural and human—germane to the quality and sustainability of life in a given society. The United States has nearly more inclusive wealth than Japan, China, France, Britain and Germany combined, and close to 32 percent of the global total compared to China’s 8.1 percent. Besides, the other major centers of global economic power, Europe, Japan and South Korea, are American allies (so, potentially, is India); so the standard United States versus China comparisons are limited by their narrowness. China lacks partners with comparable economic heft, a reality that won’t change anytime soon.