China Militarizes Its Influence in Africa 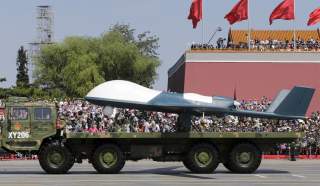 Albeit from the limited perspective of South Africa’s bi-annual Africa Aerospace and Defense (AAD) exhibition, from September 19–23, it is apparent that most African states are ready to enthusiastically support China’s ambitions for militarizing its growing influence on that continent, heralded by the first June 26 to July 11 China Africa Defense and Security Forum (CADSF). Meeting at the People’s Liberation Army National Defense University (PLANDU) in Beijing, this first forum meeting was attended by delegations from forty-nine African countries and the African Union.

Though only speaking on background due to the sensitivity of China-related military issues, almost all at AAD queried about CADSF were unsure of the direction of this organization. However, none would discount the idea of the CADSF eventually becoming another China-centered proto-alliance like the well-established Shanghai Cooperation Organization (SCO). As it derives from China’s decades of economic and political influence building in Africa, China’s formation and development of the CADSF could presage similar Chinese ambitions for Latin America.

There was no prior warning of the CADSF’s first meeting until it was announced by the Chinese Ministry of Defense on May 31, with scant reporting on its background, purpose, structure and plans. China has pursued longstanding military cooperation under the aegis of the fifty-five-state African Union (AU) and in September 2017 offered $100 million in military aid to fund the African Union Standby Force. As part of five United Nations peacekeeping missions in Africa (Congo, Darfur, Mali, South Sudan and Western Sahara), in August 2018 China contributed 1,516 troops and personnel. But despite this level of military engagement with Africa through existing organizations, Beijing decided that it required its own China-centric, pan-African defense organization.

Reporting from the CADSF noted this first meeting was led by Maj. Gen. Hu Changming, Director of the Office of Military Cooperation (OMC) of the PLA’s Central Military Commission (CMC), also the leading military organ of the Chinese Communist Party (CCP). Going out to organize large military coalitions could be a new role for the OMC, founded only in late 2015, which elevated most of the functions of the Foreign Affairs Office of the Ministry of Defense.

Nevertheless, the CADSF builds on China’s successful establishment of its Forum on China and Africa Cooperation (FOCAC) that first met in 2000. The CADSF could also be tied to the tri-annual meeting schedule of the FOCAC. This organization does not have a multinational secretariat based in China or Africa, but Chinese leadership and control is exercised through a “FOCAC Follow Up Committee” consisting of thirty-three Chinese government departments and agencies. This, in turn, is managed by a secretariat of directors general from the ministries of Foreign Affairs, Commerce, Finance, Culture and Tourism, and the International Department of the Central Committee of the CCP.

So far, no similar Chinese led and controlled multi-department “Secretariat” has been announced for the CADSF, so it is possible these functions are being performed by the OMC. If this were the case, the CADSF would in essence be a Chinese led and managed organization like the FOCAC. Perhaps this could be viewed as the PLA template for an “administrative alliance” in which China gathers military elites “captured” by layers of personal lobbying, military aid, cooperation and training programs, which both benefits from and compliments years of economic and political network building. China’s generosity both within and outside CADSF, then goes far to convince the member states to agree to China’s centrality to the organization and to gradually defer to its leadership.

But it is still possible that as China seeks a more formal cooperation agenda for CADSF that Beijing could seek greater legitimization via a regional headquarters with a secretariat providing generous “employment” for African military and government officials. This would be close to the experience of China’s capturing of the Shanghai Cooperation Organization. China’s leverage toward this end will derive from its superlatives: Africa’s largest trading partner since 2009; $300 billion in investments; $60 billion investment pledges at the 2015 and 2018 FOCAC meetings; and about a million Chinese workers on the continent.

Likely early Chinese goals for the CADSF were revealed in the course of its first agenda, a two-day conference in Beijing and then visits to PLA units and weapons factories by smaller groups of African delegates. In the two-day conference located at the International College of Defense Studies at the PLA National Defense University in Beijing, the Chinese side stressed their commitment to continued military cooperation with Africa while some African military representatives stressed that China should help them with resources to do their jobs. But Major General Hu’s was reported as having said that “China was averse to cold war mentality as there was a need for collective security mechanism that would guarantee security of both China and Africa.” This could be interpreted as an attempt to divide Africans from the United States, the source of “cold war mentality.” As has transpired with the SCO, it can be expected that China will use the CADSF to produce consensus statements increasingly critical of the West.

Perhaps China’s second priority for the first CADSF meeting was to promote arms sales. One Chinese company at the AAD exhibition had received one of the CADSF delegations and agreed that CADSF could do much to promote Chinese arms sales to Africa. Some of its officials were even hopeful that CADSF could develop much like SCO. According to the Stockholm International Peace Research Institute, China’s share of the continent’s arms purchases nearly doubled to 17 percent over the 2013 to 2017 five year period. China targets the African market with very low-cost but capable weapon systems like the $15 to $20 million Guizhou FTC-2000G supersonic strike fighter. The FTC-2000G combines the empennage and engine of a Guizhou JJ-7 (MiG-21) trainer with a modern radar and “glass” cockpit, enabling the employment of Chinese-made precision-guided weapons. Many African guests attended its publicized September 28 “first flight,” while earlier this year Sudan took delivery of six FTC-2000 trainer versions.

But in seeking to expand its arms sales by investing in “downstream” military logistics, China has been rebuffed by South Africa, which has the continent’s most advanced modern weapons development sector. According to South African corporate and military officials at AAD, in the 2012–2013 time frame China attempted to establish maintenance and repair organization in South Africa to service weapons in the continent, but this was refused. But starting on a smaller scale, China will build a logistics support facility in Botswana to support the Southern African Development Community (SADC) Standby Force.

A third Chinese priority is to gain additional military access and even more bases in addition to its first ever foreign military base established in July 2017 in Djibouti. Director of the China Association of International Studies, Victor Gao, commenting on the CADSF, told Chinese television that China may seek a base on the west coast of Africa. One source at AAD suggested that Nigeria might provide such West African naval access. In early June, a PLA Navy Type 054A frigate participated in Nigeria’s 2nd International Maritime Conference and multinational naval exercise. Following its switching diplomatic ties from Taiwan to China in December 2016, China may be providing Sao Tome and Principe with $416 million to upgrade its airport and port, raising concerns China may seek naval access. Off of the west coast, in late 2011 China considered but declined an offer from the Seychelles to establish a naval supply base and more recently is suspected of having complicated India’s attempt to build a base there.

China’s militarizing of its African influence is beginning to gather momentum and it deserves Washington’s attention. Bases in Djibouti and possibly the Seychelles would serve to surround India, perhaps contributing to Indian reluctance to increase military cooperation with the United States and other major democracies. Possible West African Chinese bases would give the PLA ready access to the Atlantic Ocean and ease China’s strategic projection into Latin America, perhaps leading to challenges for the U.S. and Africa. One South African military officer at AAD, also unsure of the direction of the CADSF, stressed South Africa’s satisfaction with its South-South military cooperation with Brazil, Uruguay and Argentina. But when told of China’s recent efforts to stoke a second Falklands War and then asked if South Africa might support Argentina in such a conflict, he changed the subject.

Richard D. Fisher, Jr. is a senior fellow with the International Assessment and Strategy Center and attended the Africa Aerospace and Defense exhibition as a freelance correspondent for The National Interest.