China Is Moving into the Indian Ocean 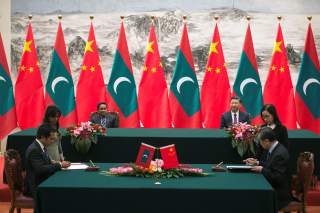 In the past few years, the Maldives has quintessentially exemplified the shortcomings of India’s ‘neighbourhood first’ policy. But there is a larger geopolitical premonition that could be anticipated from the recent crisis in the Indian Ocean islands of the Maldives, one that points to the immediacy with which China and India are approaching towards a conflict in the Indian Ocean Region (IOR). At the heart of this potential conflict lies slipping away of one of India’s important influence centers to the advantage of China. Since the current Yameen government took office, the Maldives has done a volte-face from an ‘India First’ policy, to openly ignoring India’s concerns and to embracing China.

The recent constitutional crisis in Maldives presented a unique challenge for India. While India’s interventionist retaliation of 1988 offered a reflective framework for possible solution, altered geopolitical scenario since then made the case for intervention difficult. China's call for the respect of sovereignty of the Maldives in the wake of former Maldivian President Mohamed Nasheed's call for India's intervention is symbolic of the new anchor that China is trying to establish in the Indian Ocean island country. Ironic as China's talk of sovereignty may seem, it would have been churlish to presume a free pass for India’s military intervention in Maldives this time around.

Over the past few years, China has gathered immense leverage in the Maldives, all at the cost of India. The fact that until 2011 China did not even maintain an embassy in the Maldives, points towards the pace of China’s growing grip on that nation. With the defeat of the erstwhile Nasheed government at the hands of the current President Yameen, the country’s lurch towards Beijing has been too noticeable to ignore. A number of projects have been given to China and Chinese stakeholders since 2013, most of them at the cost of India. China has also benefited with recent land-ownership rights in Maldives after a constitutional amendment and a recently awarded controversial free trade agreement with the country.

India’s loss of leverage over the Maldivian government and its decisionmakers has been colossal, which appears starker when pitted against the country’s strategic importance as a node in the Indian Ocean. The Maldives strategic location in the Indian Ocean along with its recent lurch towards China makes it a strategic double whammy for India’s regional aspirations. The Maldives is one of the several small Indian Ocean islands where Beijing is trying to gain foothold that could prove decisive in its bid to consolidate not only it’s presence but its future maritime strategy in the IOR; something which is gradually being formalized by its Maritime Silk Road push. The Maldives should be seen as a prelude to India’s forthcoming strategic confrontations and loss of leverage in Mauritius, Seychelles, Sri Lanka and possibly other IOR countries. Albeit for an apparently non-China induced reason, Seychelles’ recent rejection of India’s plan to build a naval base in the Indian Ocean country has not only added to India’s regional woes but anticipates the aforementioned concerns.

India’s readiness in countering China seems to be barely holding its neck above the water, with minimal functional capabilities. India currently has only one each functional aircraft carrier and submarine. However, India’s contestation with China in the Indian Ocean is not just a possibility of the conventional equipment-war, but an ongoing war of leverage. The most effective tool in this war is strategic hedging and for now China seems to be using it more deftly. In this regard, the recent trends have been an eye-opener for India. The Maldives, traditionally India’s sphere of influence, has already signed up for Beijing’s Maritime Silk Road initiative; Sri Lanka’s strategic Hambantota port is on lease with China for 99 years, China has considerably enhanced its above and sub-surface presence in parts of the Bay of Bengal and the Arabian Sea along with increasing Chinese sway with both Myanmar and Bangladesh. The recent functional Chinese base at Djibouti at the strategic Horn of Africa in the Indian Ocean has only compounded the overarching dilemma for India.

In a trend that is becoming a norm, small South Asian nations unavoidably get trapped in the geopolitical crosshairs of two large competing nations; China and India. The need to balance between the right kind of assistance from one country so as not to upset the other, has been only sought unsuccessfully by smaller nations of the IOR thus far. This is likely to aggravate in the face of unbridled China’s Indian Ocean push especially through its functional naval and air base at Djibouti and another planned near Gwadar in Pakistan, simultaneously with India’s recent efforts to consolidate its presence in some IOR islands. India’s agreement with the Maldives for installing radars, with Seychelles for possible lease of its Assumption Island, recent agreement with France to use its Reunion islands near Madagascar, its LEMOA agreement with the United States which could throw open a host of IOR bases to India including Diego Garcia, Djibouti and Bahrain and its most recent steps to secure strategic and logistical access to port of Duqm, on Oman's southern coast have been commendable strategic rejoinders. Going forward, one can only imagine a China pushing westward in the IOR and a New Delhi pushing eastward through its Act East and Indo-Pacific strategies.

If anything, this presumes a looming strategic crisis in the IOR.