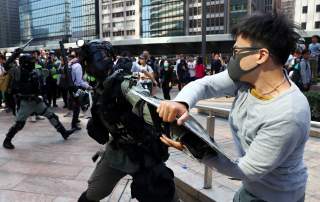 The protests in Hong Kong have become a revolution of the spirit. They have crystallized Hong Kong as a new kind of nation: one seeking not independence but security for its distinctive society and its traditional liberties.

It is a nation that would fit well within the multinational imperial systems of times past. Those empires had been realistic about their possessions. They did not incorporate them all into their home jurisdiction. Instead, they gerrymandered every imaginable form of autonomy, accommodating varying traditions, legalities, and modes of acquisition.

In the more ideological twentieth century, some empires found it hard to understand this tried and true method. They could not fit special accommodations into their ideology. They denied the very fact that they were empires. They tried to put everything under their domestic jurisdiction.

The old, pragmatic approach needs to be recovered today. Hong Kong can only be kept in the Chinese empire if accommodated as a distinctive society.

Hong Kong was declared in 1997 an autonomous “system” within China, but it was always more than that. A decade of threats from China since 2008 has driven the difference to grow further: from distinctive society into a distinctive nation.

The revolution of the last five months bears comparison—favorable comparison—to the American Revolution. The majority supporting it polls at 75 percent; the support for the American Revolution is usually estimated at 33 or 50 percent. America’s Revolution defined itself as a struggle to preserve ancient British-heritage liberties; Hong Kong’s is a struggle for those same inherited liberties, in the face of far more extreme attacks on them.

Imperial Options to Avert Cataclysm: Lessons from Past Empires

In the 1770s, there were proposed federative compromises that could have accommodated the revolution already consummated in the American consciousness. Britain instead tried to hold onto America too tightly. This drove America into separation.

China is similarly failing to accommodate the revolution already consummated in Hong Kong consciousness. It is imposing an unwelcome panda hug, instead of implementing the compromises that could work—the agreements it made in 1997. It is losing Hong Kong.

The traditional Chinese empire was wiser. Outside of its inner space, it had concentric circles of autonomy and independence. The distinctiveness of these circles was respected as a matter of course, as long as sufficient protocols of deference were performed.

Similar wisdom was found in many another empire. The Western European sea empires, the Habsburg and Russian land empires: all used multiple forms of autonomy and suzerainty. So did many classical empires. Britain learned to hold onto the rest of its empire after 1783 by using indirect rule and asymmetric federative arrangements.

China could learn much from all these past empires. It was China’s misfortune in the last century to suffer the disease of ideology in an extreme Communist form, with its concomitant penchant for uniformity. Pragmatic politicians were punished if they failed to impose uniform control. This undermined China’s imperial legacy, throwing out on the cheap wisdom accrued over the course of millennia.

China today has the same need as British in the 1770s for a pragmatic federative form of unity.  What Britain had gotten China to agree to in the 1997 handover was a form of imperial federative unity that would have rendered its empire viable in the specific case of Hong Kong. What Hong Kong is fighting for is simply implementation of this agreement.

Today fewer Hongkongers identify as “Chinese”—11 percent—than ever before in the decades since Hong Kong was returned to China. Five times more identify as “Hongkongers”—53 percent.

The identity gap at China’s expense has been growing ever wider for ten years—for all the time that China’s pressures on it have been growing. It widened again in 2017 when Beijing blocked implementation of the electoral provisions in the Basic Law. And again this year, when China tried to impose an extradition law.

This last brought on today’s mass protests, on many days with more than a million on the streets—equivalent to forty-five million in America. This has been going on for five months.

Psychologists find that two months of repetition of a certain type of behavior turns it into second nature, an ingrained part of who a person is. A Hongkonger identity, affirmed publicly against Beijing at serious personal risk, is by now second nature for most of the people of Hong Kong. It is their “who we are.” It makes these street gatherings the foundational communion of a new nation.

“One country two systems” has become one country two nations. If China still wishes to keep Hong Kong, then it will have to reverse course and accommodate the reality of Hong Kong nationhood.

It has been said that religion in Communist countries is like a nail: the harder you hit it, the deeper it sinks in. The same is true of national identities.

And it is not just Hong Kong that China has been alienating. In the same period, it has been driving away most of its neighbors and the world at large with its aggressive policies. It has brought about a deep evolution of consciousness at its own expense.

Outlines of the Hong Kong Identity

Hong Kong has an organically hybrid national identity, at once Asian and Western. It preserves Chinese traditions better than the mainland, which decimated them under Communism. It uses the British common law and English as an official language alongside Cantonese and Mandarin.

The duality of Hong Kong’s identity is not an inconsistency but a consolidated nature. All originally non-Western societies are hybrids today with Western elements. Hong Kong’s hybrid is a stable one, the product of a long evolution.

Its Basic Law establishes a “firewall” of independence for its legal system from the totalitarian one on the mainland—the firewall that the extradition bill tried to smash. It has a dozen foreign judges from other common law countries on its highest court. Streets bear British names. Its protests hoist British and American flags and sing “Glory to Hong Kong” as a national (but not separatist) anthem. It has found its national heroes in its citizens who have suffered at the hands of Beijing; the anthem names them as “martyrs” and speaks of marching onward through “blood.” Thus it draws a symbolic line of blood, as revolutions always do, dividing loyalty from treason. It means there is no turning back.

It is not an Asian-nationalist identity that Hongkongers want. They have none of the enmity toward Western global influence found in Maoist or Communist nationalism.

Hong Kong is an informally integrated part of the Asian extension wing of The Organisation for Economic Co-operation and Development (OECD), i.e. the West. The East Asian OECD-type societies are the most westernized of all societies outside of the civilizational West, Hong Kong most of all. This puts it far ahead of and qualitatively distinct from the mainland. It would take the mainland decades to catch up, even if freed of Communism. Its preservation as distinct is an existential necessity for its people in this era.

Prospects for a Peaceful Resolution: The 5 Demands

Prospects for a negotiated compromise are poor, given Beijing’s attitudes, but not impossible.

The Hongkongers’ demands are all reasonable and conservative: to uphold the law and render the status quo sustainable. This makes it easier to meet their demands, but harder for Hongkongers to compromise further on them.

The first three demands are prerequisites for protesters to be able safely to call off the demonstrations and release the government from immediate pressure:

1. Withdrawal of the Extradition bill. This has finally been done; arrangements are needed to prevent its reintroduction.

2. Withdrawal of the state’s definition of the mass demonstrations as riots, which has turned millions into marked men, easy to arrest and sentence later. Only re-designating the protests as legitimate can restore safety.

3. Release of the imprisoned demonstrators.

Where there could be room for compromise lies in the two additional demands:

4. An independent investigation into the police violence, in keeping with Hong Kong tradition.

Could there be a limited investigation, with amnesty for most police and those who ordered them to use excessive force? Yes, but only if accompanied by measures to keep this from becoming a license for future impunity.

5.  Free election of Hong Kong’s government, as provided for in the Basic Law and in China’s agreement with Britain. This is the only way to overcome the inertial impulse in Beijing to continue escalating its pressures on Hong Kong.

Could this be compromised on, e.g. with a schedule for more limited political reforms? Yes, but the minimum viable compromise would be a system of equal power over choosing the Chief Executive.

Beijing presently controls the selection. It allows Hong Kong a facade of a share in the process; this needs to be raised to a real share. The tried and true method for this is a co-nomination right and a dual veto on the selection. Such methods are cumbersome but have often proven in practice the only alternative to conflict, which is more cumbersome.