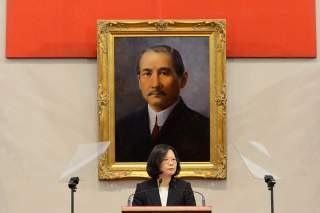 For China, the consensus status quo means several things. It means a commitment to China’s interpretation of the concept of “one China,” which is the “One China Principle”. The One China Principle is China’s national-reunification strategy for Taiwan that calls for reunification of the two sides under a modified system of “one country, two systems”, as is practiced in Hong Kong and Macau. It also represents opposition to Taiwanese independence. China wants Taiwan, especially the current President Tsai Ying-wen of the Democratic Progressive Party (DPP), to accept its interpretation of the consensus status quo by verbalizing the phrase “1992 Consensus,” which President Tsai refuses to do.

The KMT supports the consensus status quo. But it promotes a different interpretation because it opposes China’s unilateral imposition of the “One China Principle” on Taiwan. Specifically, it objects to the political formula of “one country, two systems.” Although the KMT wants to unify Taiwan and China, according to my interviews they dislike the communist system. Consequently the KMT wants the CPC to accept its terms of unification. These terms include unification under a system of democracy and rule of law, which require, prior to the unification, that China introduce democratic reforms on the mainland.

Despite their differences, China and Taiwan’s KMT use the “Consensus” status quo as the framework to advance cross-strait ties. During Ma Ying-jeou’s administration, they used it to advance cultural, economic, educational and even political ties, which culminated in an unprecedented meeting between Presidents Ma Ying-jeou and Xi Jinping in Singapore in 2015. China sees the advancement of cross-strait ties as ways to encourage reunification under its terms, whereas Taiwan’s KMT views them as ways to initiate reforms on China that would result in unification under a system of democracy.

In sum, China and Taiwan’s KMT promote the consensus status quo but maintain different interpretations and expect different outcomes. China wants to reunify under the political formula of “one country, two systems,” whereas Taiwan’s KMT wants to unify under the system of democracy. Both agree that reunification / unification is inevitable and in the future they will become ‘one China’.

Currently, the DPP and China see each other as the source of tension in the cross-strait relationship. For the DPP, China is the problem because it wants to impose the consensus status quo on Taiwan while refusing to consider other cross-strait frameworks, such as a peace and stability framework. For China, the Tsai administration is the problem because it refuses to acknowledge the 1992 Consensus while actively promoting the dynamic status quo, which supports political separation indefinitely. Furthermore, for China, the U.S. Congress is challenging the consensus status quo because it aims to strengthen the U.S.-Taiwan relationship including advancing military-to-military ties, which could embolden Taiwanese independence forces on the island.

In sum, Taiwan’s DPP rejects the consensus status quo and follows a dynamic status quo, which seeks to bolster what it perceives as Taiwan’s independent and sovereign status. Given the DPP holds political power on Taiwan now, tensions between the DPP and China are high over their different status quo interpretations and policies.

The third definition is “Parallel Movement” status quo. Parallel Movement means future generations on each side of the strait could reach a peaceful decision regarding the status of the relationship. The United States, the PRC, the KMT and the DPP all hold different positions on what happens under this form of status quo:

- The United States and Taiwan want China to issue a statement of no use of force or threat to use force against Taiwan to resolve issues;

- The United States and China want Taiwan to avoid any activities that could unilaterally change their interpretation of the status quo; Taiwan cannot take action to shift Taiwan from de facto independence toward de jure independence;

- China wants the DPP to introduce policies advancing reunification under the “one country, two systems” formula, including measures that could deepen economic and cultural ties and build political relations;

- The United States wants China and Taiwan to avoid taking action that unilaterally alters the cross-strait relationship; this includes resorting to the use of force (China) and introducing policies and making statements that move Taiwan towards de jure independence (DPP);

- The United States wants China and Taiwan to negotiate a peaceful settlement to the issue which should include the “assent of the Taiwanese people”;

- Taiwan wants continued support from the United States in accordance with the 1979 Taiwan Relations Act (TRA);

For China, the United States is attempting to alter the Parallel Movement status quo by promoting ties with Taiwan and changing the nature and scope of those ties. The United States has authorized a large arms package for Taiwan. The U.S. Congress has passed three pieces of legislation—the National Defense Authorization Act, the Taiwan Travel Act, and a law requiring the U.S. Secretary of State to help Taiwan regain observer status at the World Health Organization. Though weak, the legislations bolster U.S.-Taiwan ties and advance military ties. For China, they undermine the commitments the United States made to China in the three joint U.S.-PRC communiqués and send the wrong signals to Taiwanese independence forces on and off the island.

Since the DPP assumed political power on Taiwan in 2016, Taiwan and China have battled over the different status quo interpretations, as each side is trying to implement different status quo policies. Concomitantly, each side is trying to compel the other to accept its respective interpretation of the concept. To date, the Tsai administration has refused to acknowledge the 1992 Consensus (like the Chen Shui-bian administration (DPP) (2000–2008). For China, this means the Tsai administration rejects the “One China Principle” and refuses to oppose Taiwanese independence (the DPP perceives Taiwan is already independent but needs to formalize this status in the constitution). China’s actions in the post-election period around Taiwan (and even farther afield) are directed at compelling Tsai’s administration to accept the consensus status quo by verbalizing the phrase “1992 Consensus.” From China’s viewpoint, the Tsai administration is altering the status quo because it refuses to recognize the consensus status quo. Until that time, China will violate cross-strait agreements reached with the Ma administration.