For China, Private Military Companies are the Future 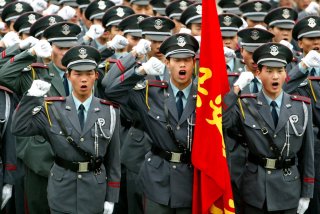 On August 11, nine Chinese workers were killed in a blast in Pakistan, the latest in the string of attacks targeting Chinese citizens. The incident highlighted the vulnerability of Chinese nationals and assets abroad and the need to improve protection and security for workers in foreign countries. As a solution, China has come to see private military companies (PMC) as an eminently necessary tool.

Though first emerging in the 1990s, the need for Chinese PMCs became clearer from the 2000s onward. This is because threats to China’s international ambitions grew in tandem with the country’s economic impact and clout abroad.

These risks were particularly pronounced as China and its business community expanded their interests into unstable areas of the globe. For example, inroads to Afghanistan led to the killing of eleven Chinese nationals in the country in 2004. These types of threats were only amplified with the launch and spread of the Belt and Road Initiative (BRI) in 2013 as hundreds of thousands of Chinese nationals were employed on projects overseas. A series of unfortunate incidents involving Chinese workers across a number of African countries, Iraq, Kyrgyzstan, East Timor, and, most recently, in Pakistan followed. Overall, these events seemed to loudly signal the need for more effective protection of Chinese assets and nationals.

As such, Beijing was keen to act. However, it remained behind its more advanced counterparts in the West and Russia.

For the Chinese to rival their counterparts, a greater level of professionalism has been required. Some efforts have been made to this end when, in early 2019, Frontier Services Group announced the creation of a “training base” in China’s westernmost province of Xinjiang.

Still, there remains a significant gap between China and the leading actors in the field. Western and Russian private military companies are showing larger prowess while operating in tough and distant geographic areas. Moreover, the countries where these specific companies work are usually politically and economically related to a PMC’s home country. For instance, Russian companies are, logically, present in those African states which enjoy burgeoning military and political ties with Moscow.

Therefore, finding a niche is as much an economic effort as it is a geopolitical one. Thus far, Chinese PMCs have found a market in the countries which are closely related to the BRI. Additionally, Chinese PMCs are substantially cheaper than Western alternatives. As such, it is poorer, and by extension often also more corrupt countries, who are likely to opt for the Chinese companies.

For Chinese PMCs which intend to operate abroad, having an adequate legal framework is essential.

For instance, presently Chinese law prohibits the companies from using weapons outside of the country. Out of some 5,000 Chinese companies, the twenty biggest companies enjoyed this right by 2016. In China’s case, the lack of independence of the companies from the state is palpable. Boundaries are blurred and, in many cases, it is unclear how much Beijing coordinates the activities of the PMCs.

Nevertheless, there are indications as to the growing influence of the state in directing the overall strategic thrust behind PMCs’ expansion abroad. The 2009 regulation on the administration of security and guarding services promulgated in China clearly states that 51 percent of PMCs must be owned by the Chinese authorities. PMCs are increasingly becoming part of the Belt and Road National Security Intelligence System whereby the companies help collect vital intelligence and cooperate with Chinese embassies on the ground.

Considering growing authoritarianism in China, PMC-Chinese state relations are more similar to the Russian model which is premised on near-complete dependency on the state. Russian companies are also notorious for the lack of accountability and obstruction of inquiries into their activities, allowing them to operate in precarious political situations. Therefore, Chinese companies operating in poor African and Asian countries with shattered economies and high levels of corruption among the political elites are likely to follow a similar developmental path.

For the Chinese PMCs, operations in unstable regions could be dangerous and self-damaging too. A mishap can lead to dire consequences inviting local military groups to attack Chinese personnel. Since Chinese companies operate where shady contracting and corruption are the order of the day, it could also undermine the image China’s leadership strives to build abroad. Armed Chinese PMCs contradict with the image the Communist Party tries to build of China which abstains from interfering in the internal affairs of other countries.

If properly navigated, unstable areas could nevertheless be lucrative as well. Chinese PMCs can help China impose control over resource-rich territories and critically important infrastructure in Africa or Afghanistan. As China is seeking new sources for its growing energy appetite, the hold over such small but strategic spots has outsize importance for Beijing and the regional geopolitics. For instance, following the U.S. withdrawal from Afghanistan, a debate is being had on whether China will be lured by Afghanistan’s mineral riches which are valued by some at $1-$3 trillion. Unexplored Afghan oil reserves and natural gas reserves of nearly 15.7 trillion cubic feet are attractive, too. PMCs will play a pivotal role if Beijing decides on exploring these opportunities.

The PMCs are also increasingly seen as a part of the geopolitical agenda China harbors for the regional and global order. As the United States is decreasing its military presence across the Eurasian landmass, this opens up the space for China’s projection of power into regions like Afghanistan and the Middle East. Expansion of influence brings risks on the ground and the need for the use of PMC rapid operations in the face of the absence of central governments’ proper security services.

As much as it is an opportunity, the use of PMCs can also be a cause for geopolitical tensions with valuable partners. A long-discussed issue of how Russia would accommodate China in Central Asia shows that the two countries have had a certain division of responsibilities: Russia secured the space militarily, while China steadily increased its economic profile. Yet, the U.S. withdrawal from Afghanistan and a potential spillover of insecurity into Central Asia and Xinjiang pushes Beijing to seek additional ways to shore up its position. Indeed, Beijing has already opened a military base in Tajikistan and increased the number of drills with Central Asian countries. Though it is unlikely that Moscow will militarily respond to Beijing’s growing security posture, tensions between the two partners may grow.

Beijing’s shift in approach was signaled recently when the Chinese foreign minister Wang Yi toured Central Asia in July 2021 and underlined Beijing’s intention to provide the region with both “traditional” and “nontraditional” forms of security assistance. The latter could well signify the growing reliance on PMCs.

So far, at least six Chinese PMCs have operated in the region, but now circumstances are riper than ever to shore up their role. As the expulsion of Chinese workers in the Full Gold Mining company in Kyrgyzstan in 2020 showed, there is an urgent need for safer havens for Chinese nationals and assets.

Yet, Beijing is careful not to overestimate the widening opportunities in Central Asia and other important regions along BRI. An extensive spread of PMCs can be damaging, inviting nationalist reactions from local populations and the general deterioration of ties with host countries.

Moreover, China increasingly regards PMCs as an effective tool in great power competition with the United States. Since a full-blown military confrontation between the two is unlikely, proxy wars and the use of PMCs are likely to become major elements in pursuing advantages on the ground.

Despite the troubles the industry currently faces, Beijing is likely to increase its reliance on PMCs. The present international environment—with a deteriorating global security situation and a sprawling BRI—underlines the need for protection of growing Chinese interests abroad. A large pool of some 57 million veterans (as of 2020) in China is yet another indicator of the vast potential the PMC sector has in China. Reliance on the companies will be also seen as a sure instrument for Beijing to gain influence in far-flung locales as it seeks to step its game up in the intensifying great power competition with the United States.

Emil Avdaliani is a professor at European University and the Director of Middle East Studies at Georgian think-tank, Geocase. He tweets at @emilavdaliani.