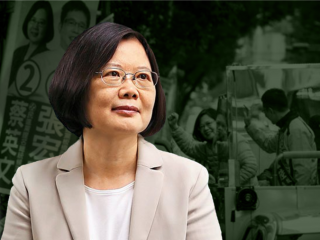 A little over a month before Taiwan’s next president, Tsai Ing-wen, takes office, cross–Taiwan Strait issues have found their way onto the main international stage. Meeting on the sidelines of a nuclear security summit in Washington, DC, Chinese President Xi Jinping urged U.S. President Barack Obama to “keep taking concrete actions” to help maintain cross-Strait peace. It is not unusual that the issue of Taiwan comes up in any meeting between the two presidents, but Xi’s raising the subject shortly before Tsai’s inauguration on May 20 reveals Beijing’s growing concerns about the uncertainties of cross-Strait relations under the lead of the traditionally pro-independence Democratic Progressive Party (DPP).

Beijing’s policy on Taiwan is clear: it opposes any form of separatist activities seeking Taiwanese independence, and it adheres to the 1992 Consensus (and its primary assumption that Taiwan and the mainland belong to the same China) as the common political foundation for promoting peaceful development of cross-Strait relations. Unlike President Ma Ying-jeou, who upholds the “one China” essence of the 1992 Consensus, Tsai Ing-wen has declined to endorse One China. Instead, Tsai has proposed that she would base her cross-Strait policy on an “existing political foundation,” which contains “the existing Republic of China (ROC) constitutional order.” How do people in Taiwan view Tsai’s current approach to China? Would Beijing take it as a gesture of goodwill, as it seems to be the closest concept to Beijing’s one-China principle that Tsai has proposed so far?

Tsai’s current policy of recognizing the ROC constitutional framework without outright accepting the concept of One China fares well domestically. In a recent survey by Taiwan Indicators Survey Research, 55.1 percent of the Taiwanese public believes Tsai’s policy qualifies as maintaining the status quo in relations with the mainland, an option that has topped the people’s preferences for Taiwan’s future since 1995.

In fact, Tsai’s policy provides a high degree of flexibility to accommodate different voices in Taiwan. Without accepting the one-China concept, Tsai caters to the current domestic atmosphere of unfriendliness toward Beijing, prevalent in a society with a growing Taiwanese consciousness, particularly the younger generation. Without rejecting One China, Tsai soothes the nerves of those who are concerned about irritating Beijing and hence a downturn in cross-Strait relations, which could cause a loss of economic opportunities from bilateral economic ties with the mainland and Beijing-led multilateral agreements.

It is worth noting that although more than half of the people believe the next government that promises to work under constitutional order will preserve the cross-Strait status quo, people’s opinions are split on whether the constitutional framework advocates One China. Specifically, people are diverse in their interpretations of Article 11 of the Additional Articles of the Constitution, and its derivative laws, the Act Governing Relations between the People of the Taiwan Area and the Mainland Area. The laws indicate that the ROC’s territory includes the Free Area, the Taiwan area “under the effective control of the Government” and the Mainland Area, “the territory of the Republic of China outside the Taiwan Area.” In the recent survey, 38.3 percent of the people believe this formulation implies One China, while 40.1 percent of the people argue it does not. While President Ma was clear that the ROC constitutional order suggests One China, Tsai has not yet explained how she interprets the relationship between the two sides of the Taiwan Strait under the ROC constitutional framework. Considering her current policy of ambiguity has played well among the people of Taiwan, Tsai has every reason to remain neutral.

While Tsai’s cross-Strait policy is well received in the Taiwanese public, how does Beijing take it? Earlier attention has been placed on Chinese Foreign Minister Wang Yi’s speech at Washington’s Center for Strategic and International Studies (CSIS) in late February, the first time Wang mentioned the “constitution of Taiwan.” Some argue that Wang’s citing the constitution is a breakthrough in the cross-Strait relations, as it signals that Beijing has acknowledged the existence of the Constitution of the Republic of China and thus affirms the “two-state theory.” Indeed, one should not ignore Wang’s novel gesture, as it may be a positive response to Tsai’s recent effort to frame a cross-Strait policy closer to the one-China concept. The inclusion of “the constitution of Taiwan” in Wang’s speech, however, should not be misunderstood as Beijing backing down from its one-China principle. To put it in context, Wang mentioned Taiwan’s constitution in support of his main point—the significance of upholding the one-China principle. Specifically, Wang first prompted the next government in Taiwan to “accept the provision in Taiwan’s own constitution that the mainland and Taiwan belong to one, the same China.” Later, Wang took a tougher line in signaling that if the new government violates its constitution, which advocates One China, the people of Taiwan, the international community and Beijing “will not accept it.” As Wang put it, “the one-China principle, this is what we care about.”

In fact, Beijing has increasingly shown concern about Tsai evading the one-China concept. Beijing’s repeatedly raising the one-China principle at different occasions has made it clear that the new Taiwan government has little choice but to address One China. On March 17, Beijing announced it had formally resumed diplomatic ties with Gambia, a former ally of Taipei. Asking whether such move was to send a warning to Tsai, Chinese foreign-ministry spokesperson Lu Kang replied that the restoration of diplomatic ties “targets no one,” but emphasized the importance of adhering to the one-China principle to promote the peaceful development of cross-Strait relations. Kenya’s recent deportation of a group of Taiwanese to China, where they are being investigated for allegations of wire fraud, also shows Beijing’s resolute intention to practice its One China principle. On a hotline with his Taiwanese counterpart Andrew Hsia regarding the deportation case, the mainland’s Taiwan affairs chief Zhang Zhijun again emphasized that Taiwan should uphold the one-China principle of the 1992 Consensus to continue cross-Strait peace. Beijing is also carefully watching political developments in Taiwan and responding to any political moves of concern. On March 30, seeing Taiwan’s New Power Party (NPP) caucus attempt to propose an amendment to the Referendum Act to lower referendum thresholds, Beijing responded that it would firmly oppose to any potential laws in Taiwan that “conveniently facilitate separatist activities for Taiwan independence.”

Beijing’s frustration is real, and it has continued to pressure Tsai both directly and through the United States. President Xi’s recent talk with President Obama during the Nuclear Security Summit may not be about trying to influence U.S. policy on Taiwan issues, as the United States has been clear and consistent about its position: that it will remain committed to its one-China policy based on the three U.S.-China joint communiqués and the Taiwan Relations Act. Rather, Xi’s purpose is to restate that Beijing is displeased with Tsai dodging the one-China concept, and to send a message—as Beijing has done since Tsai was elected in January—to urge the next Taiwanese government to adopt a cross-Strait policy closer to Beijing’s one-China principle.

Emily S. Chen is a Silas Palmer Fellow with the Hoover Institution, a Young Leader with the Pacific Forum CSIS and a Non-Resident Fellow with the Center for the National Interest. She holds a master’s degree in East Asian Studies with a focus on international relations from Stanford University. Emily tweets @emilyshchen.