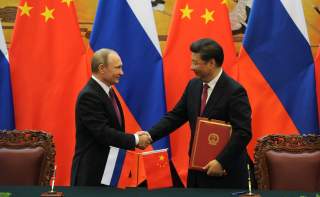 The scenario that must concern American defense planners above and beyond all others is that dark, yet still rarely discussed possibility that China and Russia could somehow become engaged in simultaneous armed conflict against the United States. While neither Moscow nor Beijing are strong enough by themselves to go toe-to-toe with Washington, DC in a high intensity long-duration war, a well-coordinated tandem effort could undoubtedly pose major problems to the long-time superpower. Such a scenario has rightly been seen as extremely remote, in part because a major lesson of the Cold War seems to have been the fallacy of viewing the communist bloc as monolithic, when in fact it was deeply fractured. Arguably, the tragic Vietnam War would never have been fought if such fractures had been better understood in Washington.

But this is a new world and evidence is everywhere apparent that Moscow and Beijing are growing closer by the day. Some of the latest examples of their geostrategic coalescing are, for example, the large Chinese delegation at Russia’s recent Arctic conference in Archangelsk, China’s increasingly vocal support for Russia’s intervention in Syria, as well as the common refrain in both Russia and China that both powers are strongly opposed to U.S. deployment of the THAAD system into South Korea. I have previously mentioned the surprising candor with which strategists in Beijing are debating the future of China’s long-time policy of disavowing alliances [不结盟]. Once again, the vigor of this debate is on display in a 2017 article that appeared in Chinese Foreign Policy [中国外交] under the title: Make an Alliance with China? Russian National Interests and the Likelihood of a China-Russia Alliance [与中国结盟吗? 俄罗斯国家利益与中俄结盟概率].

The article offers a candid and relatively objective argument on this issue, which is of major importance to the future of global politics, and so this edition of Dragon Eye will summarize the contents of this fascinating paper. At the outset, the author suggests that the potential of a China-Russia alliance could be a transformative strategy [改变现状的战略]. It is, moreover, suggested that other significant Beijing strategists, such as Zhang Wenmu, have favored this approach, since Zhang apparently has said that “U.S. containment invites China-Russia counter-containment” [即美国遏制与中俄反遏制]. The author of this article concludes that alliance could be “an effective tool” for coping with “American pressure.” The issue of Russia’s immense natural resource base is also considered quite relevant to Beijing’s future deliberations on the issue.

And yet much of this paper is devoted to “pouring cold water” on the proposal to align China formally with Russia. A theme discussed widely in the paper is the possibility that the alliance would not be viewed as a defensive reaction, but rather as an offensive [具备一定的攻击性] and aggressive step. On the one hand, the author identifies a classic “entrapment” argument against alliances, noting that China could get pulled into unnecessary military conflicts. On the other hand, the author notes that Russia hardly requires the assistance of Chinese military forces. Moreover, the point is made repeatedly in the article that China’s conversion of economic power into military is a relatively slow process [经济实力向军事实力转化的速度相对更慢] resulting in a lag, even as its economic ascendance is more obvious. While not stated explicitly, the author seems to imply that China’s continuing military weakness is an obstacle to a China-Russia alliance, perhaps because China is not seen as a sufficiently capable partner. However, the author nonetheless is surprisingly explicit in stating that China would be the more senior partner in a hypothetical alliance, largely due to its economic heft [中国…占优势的情况]. Yet, Beijing would also inevitably demand more help from Moscow within this alliance, given the already evident strategic pressure placed on China by Washington’s “rebalance to the Asia-Pacific.” Indeed, the author illustrates the inherent tensions of a China-Russia alliance, by suggesting that Russia has actually benefited strategically from the American “rebalance” and that a China-Russia alliance would create certain contradictions in Russian diplomacy, for example in Moscow’s quite extensive dealings with Southeast Asian nations.

This analysis suggests that the Ukraine Crisis may not actually have altered world politics so completely. After all, it is observed, Russia depended on its own military strength in the crisis and, moreover, the crisis did not really remove pressure as applied against China. The author states emphatically that Russia’s first priority will remain on improving the economy [俄罗斯…经济发展任务十分严峻] and this will depend, above all, on improved relations with Europe and the United States. Applying a somewhat similar logic, it is also observed that U.S.-China cooperation on many issues might not persist if China took the step of actively pursuing an alliance with Russia. The author additionally points out that both Russia and China have been able to attain local superiority in areas of concern, suggesting that an alliance could be unnecessary. Finally, a point is made regarding Russian cultural attitudes toward China. According to this article, polls find Chinese favorably inclined toward Russia, but that Russians are not similarly favorably inclined toward China.

Nevertheless, the analysis is not entirely pessimistic regarding the prospects of a China-Russia alliance. Indeed, the author comes around to concluding: “One can predict that Russia will become the most fundamental objective of China’s alliance-making” [可以预见的是俄罗斯将成为中国结盟的最主要目标]. It is explained further that “confronting a situation of pressure from the United States and its allies, China needs a country that it can have close cooperation with that will form a strategic rear flank that can be depended on and this country is Russia.” Successive years of enhanced military exercises are noted and the 2012 near simultaneous strategic moves against Japanese island claims are cited as positive examples of the prospective alliance’s promise. Moreover, it is stated that increased shipments of Russian oil and gas will improve China’s energy security. The author explicitly suggests coordination between China and Russia on difficult diplomatic questions, such as the Iran and North Korean issues. In an intriguing closing observation, the author predicts that “Russia’s rising power will enable it to increase its position within an alliance. Ten years in the future, the potential for a China-Russia alliance will increase” [十年以后 . . . 中俄结盟概率将上升.]

Still, this Chinese study, which exhibits an impressive objectivity, can hardly be called a full-throated endorsement of such an alliance. Maintaining some of the most important aspects of current Russia-China cooperation is in the realm of “political and moral support” [政治和道义支持], and the author seems to recognize that these partners are quite satisfied with the already high and steadily improving climate of cooperation. They do not see a great advantage to formalizing the partnership, at least in the near term. The author maintains that “scrapping the old policy of disavowing alliances should not be equated with choosing to make alliances” [放弃不结盟政策并不意味着选择结盟]. That nebulous statement is likely meant to suggest that a long, gradual process is envisioned and Beijing will wisely avoid any precipitous moves. It is noted that the Chinese government has already embraced a policy of “building up strategic strong point countries” [打造战略支点国家] that, after all, has a similar connotation to this discussion.

A final point to consider is the author’s conclusion that “U.S. strategic squeezing and containment has not yet reached a level that it is imperative for the two countries to react by forming an alliance” [美国的战略挤压和遏制也并没有达到需要两国结盟应对的程度]. To be sure, this statement carries the implied threat that if Washington does seek to ramp up the “rebalance,” that one of Beijing’s possible responses will be to actively seek a more formalized military partnership with Moscow.