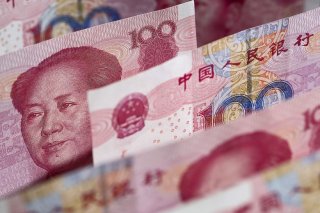 First-quarter GDP reports from Chinese provinces have provided more confirmation, if any were needed, that China’s economy is flying on one engine. Liaoning, the industrial powerhouse in the northeast of the country, is expected to register a contraction of 1.3 percent for the first three months of 2016, making it the first province to do so in seven years. The poor results come on the back of a severe downturn in the energy and heavy industry sectors, and reflect the growing divergence between those areas and the service sector, which has contributed the lion’s share of China’s overall 6.7 percent first-quarter growth rate. For example, Shanshui Cement, one of the province’s biggest producers (and polluters), has posted record losses for last year and is teetering on the edge of default after defaulting on a 2-billion-yuan bond.

The extent to which the slowdown in manufacturing and the improvement in services is part of a managed rebalancing of China’s economy is an open question. On the one hand, the Chinese Communist Party has its sights set on transitioning the country’s economy from a low-wage, export-dependent model to a higher-wage consumption model. The discrepancy in regional economic performances could be explained by an intentional downsizing of one part of the economy and the incentivizing of the other until they meet somewhere near the middle. More skeptical observers see the so-called rebalancing as an extemporized attempt to put a floor under an industrial sector that is collapsing under the weight of massive overinvestment. It is this capacity overhang that has necessitated the severe retrenchment currently underway in the sector. From Australia to sub-Saharan Africa to the UK, the resulting depression in commodity prices and the glut in the steel and aluminum markets have had a serious impact.

China’s trading partners, exasperated by what they view as unfair market distortion, have begun to hit back, slapping tariffs on imports of Chinese coal in a bid to restore the competitiveness of their domestic producers. In March, the United States imposed a duty of 265.79 percent on imports of cold-rolled steel from China, to add to a previous antidumping tariff of 255.8 percent levied against imports of corrosion-resistant steel products. And the European Chamber of Commerce in Beijing, which released a study showing that subsidies in a range of Chinese industries from paper to steel are resulting in below-cost production, have warned that “Politicians need to realize that [Chinese] overcapacity leads to job losses, which leads to protectionism in Europe.”

The chorus of complaints seems to be having an effect, as China, after a yearlong dispute with the United States in the WTO, has agreed to eliminate subsidies from a host of sectors including textiles, metals, chemicals, medical products, hardware and building materials, and agriculture. Chinese acquiescence has been taken as an admission that in the interests of world trade it is time these subsidies were reined in. But the self-imposed correction will come at a heavy cost for China as they set aside $23 billion in compensation for an expected five to six million job losses resulting from the withdrawal of the subsidies. Some two hundred coal-fired power stations currently in the planning pipelines may now never see the light of day, while others will be delayed until after 2018. The aim here being to reduce the more than 500 million metric tons in excess coal production and allow current plants, some of which only operate 40 to 50 percent of the time, to reach full capacity before any more are added to the stock. A significant number of layoffs will occur in the other inefficient industries mentioned in the WTO ruling as authorities seek to finally take action against so-called “zombie state-owned enterprises” (SOEs). By hiring workers made redundant by other firms, these state-owned enterprises have come to be seen by provincial governors as a useful way of keeping official unemployment statistics low, providing employees with a salary but little meaningful work to do. Given that China’s President Xi Jinping has vowed to eliminate zombie SOEs, it is expected that the $23 billion set aside for the adjustment costs is only the beginning, as the state will have to assume the massive debts they leave behind.

But this may not be the end of China’s woes. Even if it tackles its industrial overcapacity issue and weathers potential social unrest from the millions of resulting job losses, an environmental reckoning after decades of relentless industrialization looks to be on the near horizon. The country’s massive reliance on coal-powered power plants, coupled with the governors’ own desire to improve their provinces’ figures and line their pockets, have led to a corruption-fueled spiral of environmental degradation. The Sierra Club exposed this feedback relationship between a group of twenty-one business owners and their highly polluting and inefficient industries. The organization argues that this small group amassed fortunes of $70 billion, and is singlehandedly responsible for 10 percent of the country’s CO2 emissions.

Despite plans to shut or delay the opening of hundreds of coal-fired power plants, China does not expect to hit peak coal use until 2030, meaning hundreds of new plants are still to be opened and thousands of mines to remain in operation. China’s pollution-shrouded cities are not just a sight for sore eyes—they are also deadly: an estimated 1.6 million deaths were caused by air pollution in 2013. And as more and more land has been devoured by factories and the growth of cities, less and less of it is available for farming. Forty percent of what is left is degraded by erosion, salinization or acidification, and 20 percent is polluted by mining runoff, industrial effluent or sewage, all as a direct result of the China’s breakneck economic development over the last forty years. Indeed, companies such as Conch Cement, aluminum giant Hongqiao Group or steel powerhouse Shagang have expanded at the expense of the environment, and are some of China’s main industrial producers and environmental villains.

The only way China can hope to prevent the looming environmental disaster lurking behind its current economic difficulties is embracing deindustrialization and a much lower growth model than it has had until now. That’s bad news for the developed and developing world alike. Countries that had been riding the crest of the Chinese economic wave had better start looking into how to diversify their economies fast. Otherwise, the Chinese trough could drag them down too.