China: The Real Winner of the 2016 Election 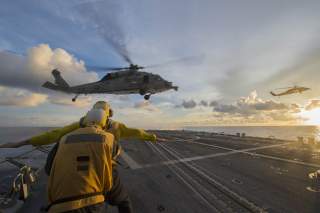 After a president of the United States takes office, he normally enjoys what is called a “honeymoon period,” which is when the public and Congress generally approve of his actions and policies. During this time period, the president often receives high approval ratings. The same can be said for the relationship between the president and foreign leaders. They, too, grant him time to understand the intricacies of the position and get a feel for how the United States works with their respective countries. The U.S. president receives much goodwill from many actors in order to ensure a smooth transition between administrations. With President Donald Trump, it does not appear that there will be much of a honeymoon period with the American public or even with some foreign countries—particularly the People’s Republic of China.

All signs point to China taking advantage of the transition between administrations, and Trump’s inexperience at governing, to have its own sort of honeymoon. The Chinese—along with the rest of the world—face a similar situation. Other countries will wait to see what form a Trump presidency takes. Will his actions and policies be as aggressive as his tweets? Will his online Twitter persona differ from face-to-face interactions and negotiations with foreign leaders? At the same time, they will wait to see which of Trump’s foreign-policy campaign promises and statements will take precedent over others. Which region will he focus on? Which bilateral relationships will he view as most important? Which countries will be ignored at the get-go? How will he respond to aggression by another country? While other countries adopt a wait-and-see approach, China will test the limits of Trump’s patience.

The failures of the Obama administration’s pivot to Asia, and Trump’s promise not to join the Trans-Pacific Partnership, give China the opportunity to become the major power in the region. Its Regional Comprehensive Economic Partnership will become the dominant multilateral trade organization in Asia, and the Asia Infrastructure Investment Bank and the “One Belt One Road” initiative will ensure that all trade is centered on China. It has the mechanisms in place to dominate Asia economically and militarily as a Trump administration seeks to disengage from the world.

After China seized a U.S. underwater drone in December 2016, Trump responded to the situation with harsh tweets against China’s actions. In response to Trump, the Global Times, a newspaper run by the Communist Party in China, published an op-ed that expressed the country’s rationale for dealing with the impending Trump presidency. “Trump is not behaving as a president who will become master of the White House in a month,” the op-ed states. “He bears no sense of how to lead a superpower. . . . One thing for sure is that Trump has no leverages to maneuver the world, nor can he reshape China-U.S. relations and the way the two major powers interact. . . . If he treats China after assuming office in the same way as in his tweets, China will not exercise restraint.” Recent actions taken by China indicate that it will continue its push for an increased presence throughout Asia and the Pacific, and it certainly will amp up pressure against Japan, Taiwan and claimants of islands in the South China Sea.

Since Trump’s victory in November 2016, China has incrementally increased its military presence throughout the region. In late November, the People’s Liberation Army Air Force conducted a flyby through the Miyako Strait, south of Okinawa. This move prompted the Japanese Air Self-Defense Force to scramble its jets. While the PLAAF did not enter Japanese airspace, the Chinese have increased the number of such flybys in 2016, angering Japan. Another such incident occurred in December. That time, both Japanese and Chinese government officials accused one another of engaging in dangerous activities that threatened the lives of the pilots. Then, in early January, both South Korea and Japan had to scramble their jets after Chinese aircraft flew between the two countries and over the Sea of Japan. According to Japan, the number of times it has had respond to Chinese aircrafts by scrambling its Defense Force has almost doubled from 2015.

Also, China has ramped up its military presence vis-à-vis Taiwan. Before and after the infamous “Trump call,” China flew H-6K bombers—capable of carrying nuclear weapons—around the island. The pre–Trump call mission was the first time that Chinese aircraft encircled Taiwan. Then, two weeks later, Chinese aircraft conducted a similar mission using the same types of aircraft. The Taiwanese air force tracked and photographed the planes during the entire mission. At no point in either mission did Chinese aircraft breach Taiwanese airspace, but these missions indicate an ever-encroaching Chinese military presence beyond the Taiwan Strait. These two missions show Chinese power not only to Taiwan, but also to the United States.

And China’s strategy is not limited to flybys. In early January, China sailed its only aircraft carrier into the open waters of the Pacific Ocean and also into the Taiwan Strait. Though the carrier remained in the western part of the strait, Taiwan still launched F-16 jets and a frigate to monitor the situation. The Taiwan Strait is international waters, so the United States does not have a problem with such a maneuver as long as China abides by international laws. However, the timing is no coincidence, since it occurred as Taiwanese president Tsai Ing-wen was out of country on a series of state visits in Central America. It also came after another Global Times op-ed called for an increase in China’s maritime capabilities.

China became even more active in the Asia-Pacific region in 2016 than in previous years, but since the election of Donald Trump, it has conducted even more drills and exercises, which have caused Japan, Taiwan and South Korea to respond in kind. As the op-ed above promised, China has been resolute and has not let other countries’ protests and responses affect its plans.

With Donald Trump in office on January 20, the Chinese can no longer expect the measured, diplomatic responses of the Obama administration. Its recent actions in the region were tests to see what a President Trump would do in response to military drills targeted at its neighbors and a show of force to demonstrate that China will not allow the change in U.S. administrations to affect its own interests. The flybys near Japan, South Korea and Taiwan, along with the Liaoning carrier’s journey, did not warrant a response from Trump, but the Chinese seizure of a U.S. underwater drone did. He has only responded to provocations directed by China against the United States, but not toward its allies or friends. His responses and nonresponses have not gone unnoticed.

Throughout Trump’s first year in office, expect China to do much of the same with some twists. Expect more nationalistic overtones used in the rationale for any perceived aggressive actions. Expect newspapers and party officials to ratchet up anti-Taiwan rhetoric. Expect more frequent flybys near Japan and South Korea. Expect more Chinese surveillance missions to circumnavigate Taiwan. Expect Chinese aircraft to fly closer to the airspaces of these countries and their defense zones. Expect the Liaoning’s next journey through the Taiwan Strait to be closer to the “Taiwan side” or have more flourish. Expect China to be more aggressive in its claims in the South and East China Seas. Expect China to continue its current course of action and buildup.

Donald Trump has previously expressed that U.S. allies do not spend enough to defend themselves, so it is unlikely that he will care much about China annoying its neighbors as long as it does not directly threaten the United States. Make no mistake: China does not desire to start a war with the United States or drag it into one. Despite any chest-thumping by either country, the United States and China both need each other to thrive economically. China does, however, want to dominate the region and be recognized as the true power that it is.

As the Trump presidency unfolds, expect China to take advantage of that same honeymoon period. China has a limited timeframe to assert itself vis-à-vis Trump and the Asia-Pacific region. Expect China to have a different sort of honeymoon.