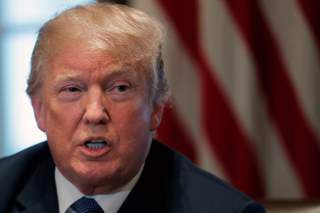 On Thursday, China’s Commerce Ministry denied that President Xi Jinping’s promise to “significantly lower” tariffs on imported vehicles this year was made in response to complaints from President Donald Trump.

Tuesday, at the Boao Forum for Asia, known as “China Davos,” Xi also made other market-opening pledges in his keynote address. In the automobile area, Xi said, in addition to the tariff reduction on cars, Beijing would permit more foreign investment in domestic auto companies.

Xi’s car-tariff reduction, despite what the Commerce Ministry maintained, looked to be in response to Trump’s demands. Monday morning, the American leader pointed out in a tweet that cars imported into the United States from China were tariffed at 2.5 percent while American cars entering the Chinese market attracted a 25 percent duty. That, Trump tweeted, “sounds like STUPID TRADE.”

Later Monday, the American president said he did not blame the Chinese for the American trade deficit. “They have really done a number on this country,” he said at the beginning of the Cabinet meeting, referring to China’s officials. “And I don’t blame China. I blame the people running our country. I blame presidents, I blame representatives, I blame negotiators. We should have been able to do what they did. We didn’t do it. They did. And it’s the most lopsided set of trade rules, regulations that anybody has ever seen.”

Clinton, in accepting that disparity, was perhaps arrogant, thinking China was a long way from making cars for the American market. Yet General Motors began exporting to the United States the China-made Buick Envisions, a popular SUV, in 2016.

Xi’s auto promises—as well as others he made Tuesday—have run into skepticism. The vow to reduce tariffs, for instance, was a retread, something Beijing pledged last November.

And there were other reasons to be less-than-hopeful. Alan Tonelson, a Washington, D.C.-based trade expert, pointed out in comments to The National Interest that “China uses so many different measures to hamstring foreign competitors that a pledge to ease up on one can easily be offset by a decision to double down on another.” There are Chinese structural barriers to reciprocal auto trade, and Xi this week promised to take down none of them.

Nonetheless, Xi’s words have significance. Markets liked the Chinese ruler’s apparent concessions, and some analysts thought they could eventually lead to a settlement of the seemingly intractable dispute between the world’s first- and second-largest economies. “I would’ve expected words like ‘China will fight to the end.’ Those are the words that came out from the Chinese embassy the day Trump announced the tariffs,” Michael Pillsbury, author of The Hundred-Year Marathon: China’s Secret Strategy to Replace America as the Global Superpower, told Fortune. Xi Jinping’s speech, Pillsbury said, “was quite conciliatory.”

Conciliatory indeed. Last Friday, the Commerce Ministry went on a bender with what the Wall Street Journal aptly called a “vehement response.” Ministry spokesman Gao Feng, the paper reported, said Beijing would not negotiate with the United States. Instead, Gao talked about “detailed countermeasures” that “don’t exclude any options.” The Journal rightly called those comments “a new phase in weeks of rising tensions.”

Said Gao, “We mean what we say.” Maybe the Commerce Ministry does, but Xi Jinping took an entirely different line in his Boao address.

As many have said, “China blinked” this week.

And Beijing will, in all probability, continue such rapid eye movement. America holds almost all the high cards in trade with China, and almost none of Beijing’s supposed points of pressure are real threats. Most of the threats, for example, would hurt China’s fragile currency far more than the sturdy U.S. economy. “Many of the proposals or suggestions on how China might respond to U.S. tariffs have the air of ‘Surrender or I will shoot myself in the foot,’” writes Steven Englander on the Bloomberg site.

The only element Washington lacked in previous administrations was political will to use its overwhelming power. So far, Trump has demonstrated such will, even in the face of withering criticism, especially at home.

That former American notion was a mistake, “a great fantasy which has done tremendous damage to our country,” as Arthur Waldron, the University of Pennsylvania historian, told radio host John Batchelor at the end of last month. “This I would say in all of American history, this is the greatest foreign policy failure.”

Not everyone at this moment would agree with Waldron, but in time they will. In any event, last month veteran American journalist John Pomfret perfectly captured the mood of the times with this title in the Washington Post: “They May Ask in Beijing, ‘Who Lost America?’”

China has indeed lost the support of the world’s most powerful society. Although there is sharp disagreement on tactics, now virtually every American agrees something has to be done about malicious Chinese trade policy. As Douglas Irwin of Dartmouth College told the Wall Street Journal, “No one is saying we shouldn’t do anything.”

So something will be done. And Xi Jinping will increasingly dislike what willful American presidents—the current one and successors—will do.