China Is Trying to Bribe North Korea into Good Behavior. Here Is What That Means for America. 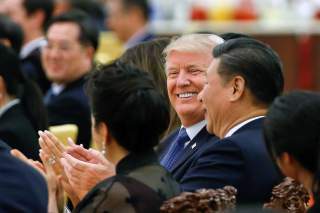 As President Donald Trump and Chinese President Xi Jinping meet in Beijing this week, not much about the North Korea crisis has changed since their Mar-a-Lago summit in April. U.S. policy toward the “Rocket Man” will not bear much fruit unless the Trump administration comes to terms with the fact that Sino–North Korean relations are strained these days.

China’s growing trade with the rogue state understandably frustrates Mr. Trump. To be fair, China’s dominance of North Korea trade is partly driven by the fact that other countries are cutting ties with Pyongyang. It is in Beijing’s interest to support the Kim regime and prevent it from collapsing, so that thousands of refugees do not pour across the border. But the fact that China ramped up its economic support in recent years—driving North Korea’s overall trade from $4.8 billion in 2006 to as high as $7.8 billion in 2013, according to the International Monetary Fund—calls for further explanation.

In a new research paper, I provide an explanation of China’s trade policy toward the rogue regime. As I elaborate in the paper and below, Sino–North Korean relations are now as strained as ever. If, in addition to that, Beijing imposes tough sanctions on Pyongyang, it might enrage the “unruly” Kim—to the extent of him wanting to go after China. While such a challenge by North Korea would not be a big deal to China with its military might, the potential conflict would be more burdensome than having to deal with North Korean refugees crossing the border into China. Trading with North Korea, therefore, amounts to a convenient strategy to buy it off. Understanding this relationship has important implications on how the United States can effectively deter North Korean proliferation through China.

A good measure of what China thinks about North Korea can be found in the People’s Daily, the mouthpiece of the Communist Party of China. Since 1949, when the People’s Republic of China was established, the newspaper has been used by Chinese authorities to propagate official viewpoints and signal new policy directions to the country and the rest of the world. Bound by the socialist Sino–North Korean alliance dating back to the Korean War, China has never allowed the People’s Daily to openly criticize the Kim regime. Reflecting the old saying: “If you have nothing nice to say, don’t say anything at all,” So gauging Beijing’s attitude toward Pyongyang is possible by measuring the number of (favorable) mentions of North Korea in the party’s newspaper. These days, the number is not looking good for Kim. In the early 1950s, the ratio of North Korea mentions in the People’s Daily averaged one per-article. The frequency remained high for another two decades. In recent years, however, the number has gone down to approximately 0.01 times per article—an all-time low.

Pyongyang has been souring on its patron too, for what it believes are good reasons. In 1984, Kim Il-sung admitted to then–East German leader Erich Honecker that he was “most afraid … that China will not stick with socialism.” That ship sailed when China’s economic reforms took off in 1978—strike one. Strike two happened when China normalized diplomatic ties with South Korea in 1992. Months in advance, Beijing twice sent top officials to Pyongyang to try to obtain Kim Il-sung’s approval, only to meet with a chilly reception. The dismayed Kim regime even threatened to open economic relations with Taiwan as revenge.

A “three strikes and you’re out” risk for China is real. As Beijing puts increasing pressure on North Korea’s nuclear ambitions, including voting for United Nations (UN) sanctions, Pyongyang has started to criticize its patron openly, warning of “grave consequences [brought about] by its reckless act of chopping down the pillar[s] of the DPRK-China [relationship].” How grave? A leaked document from the Workers’ Party of Korea in March reportedly threatened China with a “nuclear storm.” In May, a North Korean propaganda official explicitly told a cadre of local bureaucrats that, because of the “success” of North Korea’s Hwasong-12 ballistic missile, China is now “completely trapped” by a network of rockets.

This view of Sino–North Korean relations suggests a new U.S. policy approach. Pushing for more UN sanctions, for example, would likely be fruitless and could even backfire. It’s no secret that UN sanctions on North Korea have been poorly implemented, especially by China. But passing any new UN resolution requires China to sign on—often reluctantly—which enrages the Kim regime even more. China would likely continue to poorly implement UN sanctions and even ramp up trade with North Korea to compensate for them, making the crisis even worse.

What can work is to align the interests of the United States and China on North Korea trade. Secondary sanctions on China—punishing Chinese companies that violate existing UN sanctions—would make China value North Korea trade less. The Trump administration is starting to do that. But even more fruitful would be a “secondary inducement:” improving U.S.-China trade relations if China accepts the risk of being tough on North Korea. This kind of conditionality is particularly effective because lucrative trade ties with the United States are second to none in China’s foreign economic relations.

Making deals on North Korea and trade is inevitably the top priority for Trump and Xi in Beijing. Success lies in grasping the true essence of Sino–North Korea relations.

Weifeng Zhong is a research fellow in economic policy studies at the American Enterprise Institute.