China Is Using Syria's Peace Process for Its Own Ends 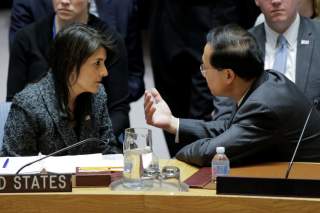 On May 13-14, China held the “International Symposium on the Prospect of a Political Settlement of the Syrian Issue” in Shanghai, marking the first time that China has hosted an international forum regarding Syrian conflict resolution. While Beijing did not deviate from its steadfast advocacy for a Syrian-led political settlement and a strict interpretation of the role of the United Nations, the symposium serves as an unprecedented indication that China is taking on the mantle of leadership in building international consensus on how to engage in the Syrian conflict and may foreshadow both Beijing’s growing role in the future of Damascus and the United States’ diminishing influence in the peace process.

Takeaways from the symposium

The symposium, hosted by China’s Special Envoy on Syria, Xie Xiaoyan, saw attendance from the UN Special Envoy for Syria, Staffan de Mistura, as well as the Special Envoy from the United Kingdom and France, and public officials and scholars from the United States, Syria, Iran, Egypt, Iraq, Turkey, Saudi Arabia, Jordan, Lebanon, and Qatar. Discussion was motivated by three undergirding questions: What does a solution in Syria look like? What are the main factors affecting prospects for a Syrian settlement? And, what is the role of the international community in Syria?

Xie reaffirmed China’s unfaltering stance, restating the importance of respecting Syria’s sovereignty, territorial integrity, and independence. To this end, Xie delineated five key tenets necessary for resolving the Syrian crisis: maintaining open multilateral communication; supporting the UN as the central channel for mediation efforts; promoting continued and active participation in peace talks in Geneva and through the Astana Process; assisting Syrian civilians and assuring that counterterrorism and ceasefire efforts operate in parallel; and supporting Syrian reconstruction efforts. Xie also called on all attending parties to remember their obligation as dictated in UN Security Council Resolution 2254, which charges signatories to immediately cease violence against civilians and to seek a political solution.

The content of Xie’s rhetoric at the Shanghai symposium is not new, but in such a novel setting it serves a new purpose. China is well-aware that UNSC resolutions in Syria are largely gimcrack, with the 30-day ceasefire instituted by Resolution 2401 earlier this year failing and escalating conflict between the United States and Russia in Syria. Instead, by both hosting a forum in which China itself is able to call for greater collaboration on enforcing a ceasefire and promoting a peaceful settlement, China is at the helm of multilateral dialogue on Syria.

By shepherding high-level dialogue on multilateral responsibility and engagement in Syria, China is able to push for its broader strategic objectives and carry greater weight in decision-making. Li Yansong, President of Shanghai Foreign Language University, called on attendees to seek common ground despite their many disparate, and sometimes oppositional, backgrounds. However Li’s attempt to foment an esprit de corps for a Syrian settlement was rooted in Chinese logic; finding common ground was predicated on establishing China’s “community of common destiny.” China, by coalescing international responsibility with its own guiding mantras, is planting a seed of influence and authority in Syria.

Following the symposium, it is clear that China has a longer, incremental approach to helping Syria, though its consistent pitch for peace may serve as a pretext for self-interested ulterior motives. Special Envoy Xie explained that China’s approach is not like the “quick fix” of Western medicine, rather that Beijing seeks to treat both the causes and symptoms, like Chinese medicine. Chen Dongxiao, President of the Shanghai Institute of International Studies, also pointedly denounced military intervention, instead stating that the “painful lesson that seven years of bloodshed” has imparted is that political settlement is the “only way out.” But given that the harrowing length of the conflict has not heretofore brought about any meaningful collaboration from relevant stakeholders, China knows that political settlement is likely a pipe dream, and may be using its position on Syria to gain regional influence.

Considering that the forum was held in Shanghai and was co-hosted by the Shanghai Institute of International Studies and Shanghai International Studies University, it is likely that China aimed to use the symposium as a legitimizing force for the Shanghai Cooperation Organization (SCO). At the upcoming summit on Jun. 9-10 in Qingdao, both India and Pakistan will join the SCO as full members, affording China a more robust mechanism for regional capacity building in South and Central Asia. In line with this reason, Russian Defense Minister Sergey Shoygu stated that Russia “counts on the support” of SCO members to restore a “united and indivisible” Syria. Similarly, Special Envoy Xie pointed out that a “huge space” exists for Moscow and Beijing to collaborate on protecting a ceasefire regime, a space which may also see SCO members act collectively.

Further, by playing a more active role in facilitating dialogue on the Syrian issue, China may be attempting to be included as the fourth guarantor state for the Astana Process. China was invited by Russia to attend the January Astana meeting in Sochi, and China’s increasingly present support for the process is indeed an indication that Beijing seeks a seat at the table. If included as the fourth guarantor state, China would have the capacity to consign Astana Process peace talks to SCO member states, lending to a strong regional consensus driven by Beijing.

While time will tell how Beijing is able to operationalize its growing influence in the Syrian conflict, it is evident that China continues to appear as a consistent and principled actor, and the international community is increasingly taking notice. Although Beijing does not play a significant role on the ground, its humanitarian and economic promises to Syria are netting incremental relationship wins; Xie explained China’s pragmatic ambitions, stating “China has no private interests, only a public heart.” Syria’s Minister of Information, Bassam Abu Abdullah, corroborated Xie’s self-assessment at the Shanghai symposium, thanking China for safeguarding Syria’s sovereign integrity and expressing hopefulness that China will play a more important role in international dialogues on Syria. With China’s Ambassador to the UN, Ma Zhaoxu, speaking about the successes of the symposium at the Security Council meeting on May 17, it is likely that China will host more multilateral dialogues on the Syrian conflict and will indeed play a more central role in seeking out long-term solutions for Syria.

What does this mean for the ecosystem of influence in Syria?

Is China’s growing role in Syrian peace talks threatening to the United States? Yes, but not directly. Beijing, as an ever-consistent actor, waves a flag of impartiality and rule obedience, a flag with which the United States is becoming less associated. As atrocity crimes in Idlib, Eastern Ghouta, and elsewhere in Syria have escalated U.S.-Russian proxy conflicts, both Washington and Moscow have been censured by the international community for infringing on norms and seeking self-interest. While some hawkish American pundits profess that unilateral U.S. intervention is necessary for Syrian peace and stability, such a policy bluntly contravenes the UN Charter and multilateral agreements, many of which the United States played a leading role to establish. By violating the very principles it sought to underpin international cooperation, the United States loses global trust, and is thereby less able to foster dialogue on Syria or broker meaningful collective action.

At the same time, China is progressively accumulating international trust, despite playing a comparatively miniscule role on the ground. Consensus building as seen by the recent symposium, the looming growth of the SCO, and economic relationships that are budding as a result of China’s more broad strategic initiatives lend to other international stakeholders acting and voting in line with Beijing on debates for how to respond to the Syrian crisis. Even if trust falls on Beijing, China will continue its status quo: reciting the obligation that a political settlement be “Syrian-owned and Syrian-led.” China’s call for a collective, multilateral plan to drive an end to the Syrian conflict, however, serves to counter Western ambitions of regime change, all while appearing as a uniform actor. China has a lot to gain by keeping Assad in power, but it does not have to actively maintain the Assad regime, Russia will.

If Beijing is able to progressively increase its role in Syrian peace talks—and especially if Beijing is able to join as a member of the Astana Process—China will more-and-more dictate the international course of action (or lack thereof) in Syria. If this were to happen, U.S. interventionism would be increasingly lambasted, and the interests of the Assad regime would likely be supported. Such a reality would lead to China and the regional consensus it has presumably amassed casting a blind eye to state-sponsored violence against Syrian civilians, all under the pretext of upholding international norms. And while China is able to develop its regional connectivity and establish reconstruction deals with Syria, the United States and Western countries do not have a viable norm-adherent means to counter China, Russia, and the burgeoning consensus.