The China Virus (No, Not That One) 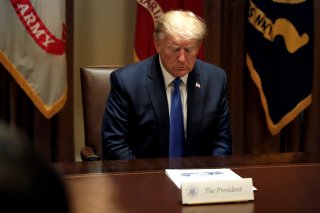 There is a China virus ravaging the world, preying in particular on Americans of all stripes. Its symptoms are clear: a feverish, paranoid state of mind that resists sedatives and generates an uncontrollable urge to cough out endless op-eds, reports, and speeches describing in ever more terrifying ways how China is going to destroy all that Americans hold dear. The only solution, victims of this virus assert, is to isolate and weaken Beijing and intimidate it with massive levels of defense spending, the go-to solution for virtually all of the United States’ foreign policy ills.

A Virus Moves Among Us

This pernicious pathogen, labeled by those few American analysts as yet uninfected as the Death by China (DBC) virus (named after a book by one of its more famous victims), has always been out there, circulating in the frenzied thoughts of purveyors of the Yellow Peril. Although kept at bay for many years by the United States’ economic vitality and a focused attention on what seemed like the greater plague of global terrorism, the DBC virus gradually crept out into the world as China began to grow economically and militarily.

At first, it only infected the arguments of highly polemical fringe analysts whom mainstream analysts had previously thought should be kept locked in the attic like a crazy relative. But alas, this did not last. Preying on the fears induced by the global financial crisis and in the United States by stories of hordes of immigrants taking American jobs and eclipsing the long-standing dominance of white Americans, the virus soon entered the mainstream. It began appearing in venerable U.S. newspapers and journals such as the New York Times and Foreign Affairs and then spread more broadly into the public, infecting those most vulnerable to tales of stolen jobs and technology, lost American dominance, and an overturned world order.

Although precise testing is needed to detect how far this contagion has spread across the planet, highly symptomatic cases confirm that its epicenter is in Washington, DC with a nearly 100 percent infection rate among politicians of both parties, their staffs, and especially the current administration, as well as a hefty number of otherwise sane policy analysts who should know better but can’t seem to resist the enticements of notoriety and financial gain that the virus offers.

There is no known cure for the DBC virus. It is so impervious to facts and logic that it has become conventional wisdom, seemingly obvious to all, and not requiring proof. What makes the virus so pernicious and difficult to eradicate is how it attaches itself to actual facts and U.S. fears and insecurities regarding China, but inflates them enormously while posing open-ended (and sometimes far-fetched) hypotheticals. In some more serious cases, the virus simply contributes to hyperventilating over how some nefarious, world-destroying Chinese plot is already afoot.

Examples of this kind of biased analysis abound. The fact that the coronavirus outbreak originated in Wuhan where there is a virology lab and local officials were slow to combat the outbreak has morphed into unsubstantiated rumors that the virus may have leaked from the lab and that Chinese officials knew it was deadly but chose not to stop it. Similarly, the way Beijing is building a modern military that threatens the United States’ post-World War II dominance of maritime Asia has been twisted into an assumption that China is dedicated to pushing the United States out of Asia and preparing to attack Taiwan.

Or consider how the fact that Beijing is stealing or forcing the transfer of some technologies and has displaced some U.S. manufacturing jobs has devolved into the notion that China’s entire national development model is based on stolen technology, subterfuge, and illegal state subsidies. Likewise, China’s checkered track record of failures and successes in investing in and aiding the developed world has been reduced to fears that China is a predatory economic entity that deliberately lures nations into bankruptcy to seize their assets. Finally, the fact that China has an autocratic political system and state-guided economy and occasionally touts its supposed benefits for others is taken to be indisputable evidence that China is working hard to subvert democracies and upend the liberal international order wholesale.

The ways the virus manifests itself are virtually endless, but the dynamic is the same. Its powerful impact causes vulnerable potential victims to panic and seek immediate relief by parroting the simple, uncluttered narrative the virus presents: China is thoroughly evil, there is no point negotiating with it, and only containment and intimidation will end its threats, so we better get started.

The Race for the Cure

Fortunately, although the DBC virus running rampant in Washington has no cure yet, its spread can be limited and its effects can be reduced significantly, through a combination of national distancing by other countries, widespread BS testing that employs actual facts, and a truth serum of sorts that presents a more realistic and balanced strategy for dealing with both the threats and opportunities China poses. Of course, rigid self-censorship by the virus’s victims would be the best way to reduce its spread, if not for the fact that its primary symptom is an uncontrollable urge to shriek about America’s coming and near-inevitable demise at the hands of Beijing unless desperate measures are taken tout suite.

If none of these treatments work, then the virus probably will not abate until it has foisted tragic consequences on the United States and other countries so severe and so undeniable that victims are forced to adopt a genuinely fact-based, pragmatic, and realistic approach to China. The hunt for a cure requires a recognition that China is both a serious competitor and a much-needed partner in dealing with the most dire threats the world faces, including pandemics, climate change, and economic protectionism. Only when such a strategy is developed and implemented will a vaccine be on hand to treat the victims of this virus.

Michael Swaine is a senior fellow at the Carnegie Endowment for International Peace and one of the most prominent American analysts in Chinese security studies. Formerly a senior policy analyst at the RAND Corporation, Swaine is a specialist in Chinese defense and foreign policy, U.S.-China relations, and East Asian international relations.