China is Waging a Maritime Insurgency in the South China Sea. It's Time for the United States to Counter It. 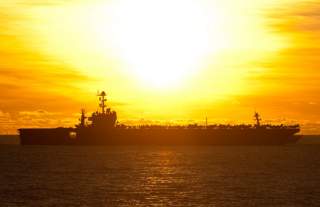 The United States’ present approach to countering China’s continued creeping aggression in the South China Sea has failed. The U.S. Navy is not achieving it long-term political objectives of using Freedom of Navigation Operations (FONOPs) to substantively change China’s revisionist attitudes and belligerent behavior in the region, or to uphold the rule of international law. However, our failure thus far is not final. While the cancerous expansion of Chinese terrestrial outposts and coercive maritime presence in the South China Sea is now considerably more advanced from when U.S. FONOPs began, there is still time to retrieve the situation before the regional and international communities either politically recognize China’s ill-gotten gains or capitulate to its continental conception of sovereignty over ocean areas. Staging a recovery requires that we come to a new understanding of the core nature of the threat, reexamine our current efforts to discern their effect on the decisive center of gravity, and apply learning from our own not-too-distant history to craft new strategies and operational concepts that will capture the initiative and more effectively achieve our just aim of upholding freedom of the sea and the rule of law in the international sphere.

China’s multi-pronged strategy to advance its revisionist aims in the South China Sea—up and down the conflict spectrum and across different domains—has taken on the character of an attacking octopus, such that multiple simultaneous and independent lines of effort, capable of being defeated individually, are combined to confuse and overwhelm a defender before they can formulate a coherent response to the aggressor either in detail or in aggregate. Much attention has been paid to the challenges posed by China’s efforts at territorial aggrandizement via the physical reclamation of land on Chinese-occupied maritime features, and its pursuit of local military dominance by the expansion of anti-access/area denial envelopes, both through the construction of air, naval, and missile facilities on new artificial island structures and through the increased presence of high-end mobile naval forces of the People’s Liberation Army Navy. At its core, however, the decisive component and center of gravity of the struggle now transpiring in the South China Sea is the contest between two mutually exclusive legal systems of authority, namely the rule of current international law versus China’s continentalist revisionism.

On the one hand is the prevailing regime, governed by the foundational principles of mare liberum (freedom of the seas) and la terre domine la mer (the land dominates the sea), as codified in the United Nations Convention on the Law of the Sea (UNCLOS) and the Permanent Court of Arbitration’s ruling in Philippines v. China. Under these bodies of jurisprudence, the contested areas of the southern South China Sea would be divided mainly between the Exclusive Economic Zones (EEZs) of the Philippines, Vietnam, Malaysia, Indonesia and Brunei, with a small sliver of international waters between them running through the Dangerous Ground. Opposing this international legal status quo is China’s revisionist territorial ambition and its conception of maritime sovereignty that reflects the Chinese vantage point as a continental power. With its pretenses to “indisputable sovereignty” over the large swath of the South China Sea that falls within the Nine-Dash Line and its attempts to impose its own domestic law on mariners and aviators plying that vast expanse, China seeks to overturn mare liberum and la terre domine la mer to apply the principles of sovereignty on land to ocean areas that China covets. China therefore views the South China Sea not as a global commons over which countries can assert limited degrees of control based on their adjacent land holdings, but as “blue national soil” that can be claimed in its own right irrespective of nearby landmasses or other geographical realities.

In the sphere of international law, China has chosen to engage selectively in the internationally recognized regime. It rejected the Permanent Court of Arbitration’s standing to rule on South China Sea cases like Philippines v. China while simultaneously putting forward legal briefs to advance its arguments under recognized legal frameworks. China is also a party to UNCLOS and thus recognizes the concept of the two-hundred-nautical-mile Exclusive Economic Zone for itself (and indeed excessively asserts the right to grant or refuse permission to foreign ships wishing to navigate its EEZ) while simultaneously violating its neighbors’ rights to EEZs by insisting upon its own extralegal “historic claim” of “indisputable sovereignty” over the area within the Nine-Dash Line. Nevertheless, despite what has been inferred by some observers to be at least a partial acceptance of the rule of international law at sea, China fundamentally seeks to defeat the prevailing legal regime by compelling de facto recognition of its own extralegal authority, using its extensive maritime law enforcement and paramilitary civilian presence to harass and intimidate the unarmed civilians of neighboring countries who attempt to exercise their rights under international law to conduct economic activities on the high seas or in their respective national EEZs.

Though this dynamic is often characterized in almost exotic terms—”hybrid warfare,” “gray-zone aggression”—the Chinese challenge should in fact be far more familiar to American soldiers, sailors and statesmen—particularly those with experience in the recent expeditionary wars in Iraq and Afghanistan—than initially meets the eye. Behind the camouflage of its maritime setting, China’s actions in the South China Sea constitute an insurgency, aimed at undercutting the legal authority of the prevailing regime (UNCLOS) by imposing extralegal authority on local civilian mariners, fishermen, and airmen through implicit and explicit threats of force. The acquiescence of local populations to Chinese depredations on their lawful rights—whether those depredations be violations of their nations’ recognized Exclusive Economic Zones or restrictions on freedom of navigation and overflight in international waters proximate to newly built Chinese installations—over time legitimizes those depredations, the ultimate outcome of which will be the collapse of the authority of the rightful order.

Though the term “insurgent” is traditionally understood to denote a non-state actor, China’s actions demonstrate that even great powers can be counted with the Viet Cong and the Taliban in both rebellious outlook and methods. Despite its expanse and strength, the Chinese government’s view of the rules-based international system as a repressive imposition created before the Chinese Communist Party held a seat at the diplomatic table, combined with the dynamics of China’s coercive tactics to bend others to its alternative view of governance makes China in the South China Sea a state-sized insurgent against the U.S.-led liberal world order.

Some commentators, notably Thomas Christensen at the Current Strategy Forum in 2016, have said that the United States has an interest only in protecting military freedom of navigation, not civilian freedom of navigation. Adopting this view as official policy would be a mistake. The rule of international law will stand or fall on the confidence of local civilian mariners in their ability to operate where and how they please within their international legal rights on a day-to-day basis. Since unarmed local civilian air and water craft operate in disputed areas on a far more regular basis than do U.S. warships, it is the civilians’ ability and willingness to disregard unlawful Chinese harassment and restrictions on navigation that will decide the contest between the two opposing legal regimes.

The present U.S. approach to the South China Sea problem, namely the current pattern of U.S. FONOPs, cannot be called either a strategy or a campaign, for it consists only of a series of desultory actions that periodically assert U.S. rights of military freedom of navigation and overflight, but which do little to blunt the true thrust of Chinese erosion of the rule of law at sea, which comes in the form of depredations on civilian rights of freedom of navigation and overflight. Sending a warship to steam within twelve nautical miles of a disputed maritime feature once a quarter is an effective means of legally communicating a reiteration of U.S. military freedom of navigation rights or nonrecognition of a particular unlawful territorial assertion, but such transits are ineffective in the larger frame because they are inherently transitory. More importantly, they do not have an appreciable impact on the behavior of local civilian mariners and aviators, who will once again be subject to Chinese harassment as soon as the Americans sail away. As Chinese propagandists frequently remind the world with their post–FONOP boasts of shadowing PLA frigates “chasing off” offending U.S. destroyers, the Americans always leave. Because it is the civilians who will ultimately confer victory in the battle between the competing legal regimes, U.S. FONOPs do not actually attack the Chinese strategy of intimidating their way into control of the South China Sea. As a result, the Chinese tolerate FONOPs (in physical practice if not in public rhetoric) because they are ineffective: U.S. FONOPs as currently practiced lack staying power, and therefore pose no strategic threat.

According to senior U.S. officers, Chinese airfields on built-up rocks and reefs would be relatively exposed targets in a full-on shooting war. But regardless of their combat value in a high-intensity contingency, the constructions and the high-end weaponry on them exercise their most significant influence in scenarios short of war. In these sub-kinetic environments, they can intimidate unarmed civilian mariners and aviators from coming too near China's core claims and military logistics hubs in the Spratly and Paracel Islands. So long as the conflict continues to play out below the threshold of open war between the United States and China, the real threat to the United States, its allies, and the U.S.-underwritten rules-based international order comes not so much from the expansion of China’s maritime presence and anti-access/area-denial network as from this maritime insurgency, in which China seeks to develop the conditions to overthrow the existing system of authority and impose its own rules and laws on mariners and aviators plying the seas and skies that it covets.