China Is Waging a Silent Media War for Global Influence 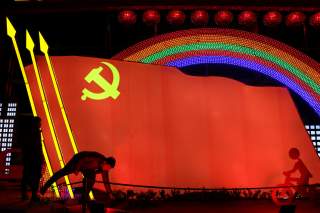 Beijing is expanding its ability to influence societies around the world through its exercise of soft power. This is best exemplified by its Belt and Road Initiative, but there is another, more stealthy effort occurring along-side it that has potentially profound implications for Chinese foreign policy—Beijing’s growing influence in the Western press. China’s state-run media companies are expanding their integration with Western news outlets and having some surprisingly significant impacts.

The Chinese Communist Party has rapidly expanded its efforts to influence discussions about China beyond its borders to attempt to suppress criticism and make international media to refer to China in a positive light. In 2018, Xinhua, China’s largest state-run news agency, announced that it was expanding cooperation with the U.S. news service the Associated Press (AP). Xinhua declared that the two news agencies had established broad cooperation in such areas as new media, economic information, and the application of artificial intelligence.

At the time, the U.S.-China Economic and Security Review Commission warned that Xinhua was rapidly expanding globally in an effort to discredit Western media outlets. The AP maintained, in response to a Congressional inquiry on the scope of the agreement between AP and Xinhua, that Xinhua would not influence its reporting or have access to sensitive information in AP’s possession. In the wake of Russia’s interference in the 2016 U.S. presidential election, no U.S. media outlet would subsequently agree to partner up with RT or Sputnik. Given the concern around state-run or influenced media companies, some U.S. members of Congress were of the view that Beijing’s influence operations inside America represented a similar threat.

Like other powerful countries—including, first and foremost, America—China utilizes aid, cultural programming, and the media to boost its global image. But for Beijing, the current influence offensive is on a much greater scale. China can more easily shape global narratives through state media that reaches hundreds of millions of people around the world. It is pouring money into such outlets as the China Global Television Network, turning them into major global media players, as Russia did with RT and Sputnik. Chinese social media and messaging platforms have also spread globally, making it easier for Beijing to push Xinhua and other state-run platforms onto more social media users outside China.

Beijing is also seeking to shape media coverage of China by using state-owned media to train foreign journalists, especially from developing countries. For example, reporters from Southeast Asia to Latin America are invited to visit China to participate in workshops and courses that offer an officially sanctioned view of Chinese foreign and economic policies. Furthermore, recent purchases of local media outlets in South Africa by pro-China business tycoons are providing Beijing with direct access to target markets.

Pro-China business owners are also donating funds to influence research institutes, universities, and think tanks abroad. China’s Confucius Institute project, run by the Ministry of Education, helps set up Chinese language and culture studies programs at universities around the world, including many in America. While some Confucius Institutes have been successful in some countries, there has been a backlash against them in other countries, where they are seen as an attempt to enhance the influence of the Chinese Communist Party. When successful, some of the Institutes have not only promoted the Chinese language and cultural studies but have created a climate of self-censorship at some universities around issues deemed sensitive to Beijing. For instance, a 2017 report from the National Association of Scholars concluded that the arrival of more than one-hundred Confucius Institutes in the United States led schools to self-censor programming about Taiwan, Tibet, and the 1989 Tiananmen crackdown.

More pro-Beijing think tanks are also being created all over the world, some directly funded by the government and others endowed by pro-Beijing businesses. Nowhere has China been more successful in swaying research institutions and business organizations than in Southeast Asia. In Thailand, for example, the Chinese Embassy has established close links to several prominent business and cultural organizations that, over the past decade, have become regular mouthpieces for Beijing’s policy objectives in the kingdom and around the region. Meanwhile, in 2017, the German government levied the charge that Beijing had used LinkedIn and other social media to target more than 10,000 of its citizens to influence and possibly recruit for intelligence operations, including lawmakers and other government employees. China allegedly had people pose as headhunters and leaders of think tanks who would offer all-expenses-paid trips to China and meetings with influential clients as a way to lure unsuspecting Germans.

Granted, many countries spend money projecting soft power in a similar manner. The challenge is to differentiate between benign types of cultural and political promotion versus more direct and potentially meddlesome influence-peddling and interference. While many Western intelligence agencies are focused on Russia’s information warfare, comparatively few of them are presumably devoting a similar scale of resources to understand China’s influence operations and how Beijing is projecting power abroad. One could easily argue that Beijing’s influence operations are far more important, however, given that this is China’s century.

While Western media outlets are busy beaming visions of the Hong Kong protests to the rest of the world, China is silently working behind the scenes to craft an alternative narrative consistent with the alternative world order it is in the process of building. That narrative paints a picture of a China that is strong, selfless, and wants nothing other than to live in a harmonious world. To Beijing, Hong Kong’s freedom fighters are little more than a bunch of trouble-makers, and China is working hard to get the world’s media to conform to its desired narrative. Many of the individuals who consume news from around the world have no idea that China is involved in crafting much of the messaging they see on a daily basis. Meanwhile, Beijing’s silent media war grows stronger each month. Eventually, it will morph into something far more visible and pronounced, but by then, much of the world will already have been conditioned to accept Beijing’s view of the world.

Daniel Wagner is CEO of Country Risk Solutions and author, most recently, of China Vision.