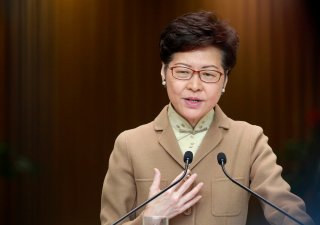 Three years ago, when visiting Washington, DC as she neared completion of her term as Hong Kong’s second-ranking official, career civil servant Carrie Lam Cheng Yuet-ngor said she planned to leave government and do something different at yearend—“perhaps social work”.

Would that she had.

Instead, Hong Kong’s then-incumbent chief executive, Leung Chun-ying, ran into such grave political turmoil that he couldn’t win a second term and left under a cloud, the third government head in a row to do so since China regained sovereignty over the former British colony in 1997. That cleared the way for Carrie Lam to become the fourth, which she is managing to excess.

As yet another Beijing-backed local leader required (or quite willing) to enforce unpopular policies on her constituents, Lam has become a political pariah for many of those she is supposed to help enjoy prosperity and stability. Rather than provide strengthened and peaceful self-rule, her term has seen growing mainland interference in Hong Kong affairs and a steady erosion of its promised “high degree of autonomy”—with predictable and growing public opposition. A recent poll found that 68 percent of the public disapproves of her government.

That has made the answer to Hong Kong’s basic question of “Who’s in charge here?” more obvious. Whenever the Chinese Communist Party considers the topic important, Beijing makes the decision and Hong Kong’s administrators must fall in line. Any inconvenient laws or traditions that suggest otherwise can be ignored; true local autonomy is an occasional thing. Most recently, Beijing has decreed that its own officials based in Hong Kong are entitled to guide local affairs even though existing laws state otherwise.

Last week brought an apparent example of such guidance. Hong Kong police arrested fifteen veteran advocates of a more democratic political system for their allegedly illegal roles in mass protests last August and September. They ranged from eighty-one-year-old Martin Lee, a distinguished barrister who helped found the local Democratic Party (no link to the American one) in 1994, to Jimmy Lai, publisher of the Apple Daily, a racy tabloid that thrives on local scandal and anti-communist rhetoric. Others included former members of the city’s Legislative Council (Legco) who are largely retired from active politics. Most are moderate pro-democrats not central to the increasingly violent street protests over the past year led by an angry and frustrated younger generation.

Chief Executive Lam claims—though few believe her—that the arrests had nothing to do with politics and are merely a reasonable exercise of law enforcement, that the accused broke the law by supporting unauthorized demonstrations. But it seems no coincidence that they include people who for years have been on Beijing’s enemies list by agitating for a freer electoral system, something expected if not explicitly promised when China regained sovereignty. They will face court proceedings beginning next month and could be sent to jail, a warning to others like them.

Lam soon acted again. She demoted four cabinet members and named five new ones, a move—local analysts say—intended to tighten control over the civil service (whose members sometimes sympathize with protesters) and to make her administration more pliable whenever Beijing calls. Lam claims she did this only to seek greater efficiency and speedier economic recovery once the covid-19 virus is contained, not to appease the Chinese Communist Party. But many don’t believe her.

The context for all this extends far beyond Hong Kong’s borders. Ever since he took over as Communist Party General Secretary and the country’s president in 2012, Xi Jinping has been consolidating his power and stifling dissent across China—to a degree not seen since the days of Mao Zedong. Hong Kong hasn’t suffered the harsh repression of Tibet and Xinjiang Province, but it’s clear that its protesters have gone much too far for his taste. The Occupy Central protests of 2014, with their telegenic yellow umbrellas, and the more recent, often violent, demonstrations against local and national policies tarnished Hong Kong’s self-proclaimed goal of being “Asia’s World City,” an attractive center for global finance and commerce. While the city’s economy is no longer crucial to China, it still provides useful financial and other services that Beijing doesn’t want to lose.

The goal of tighter control presumably explains why Xi recently demoted the senior Beijing official in charge of Hong Kong policy and replaced him with a longtime associate with a tough reputation. The new man is Xia Baolong, brought out of semi-retirement after serving as party boss in Zhejiang Province near Shanghai. Unlike his predecessor, he has no personal ties to the city and thus no old friends to favor. Early in his career, he spent years working directly for Xi and most notoriously harried Christian worship, often seen as a rival to Communist ideology. When Xi visited Zhejiang in 2013, he complained about the prominence of religious insignia; party boss Xia soon had more than 1,000 crosses toppled from church roofs and several churches destroyed. In Hong Kong, he’s again expected to be Xi’s enforcer.

Earlier, Xi had fired the central government’s senior man based in Hong Kong—blamed for failing to warn that mass protests would reach such intensity—and deployed another enforcer. He is Luo Huining, former party boss of Shanxi Province who earned a tough guy reputation by cracking down on Tibetans and corrupt officials considered loyal to Hu Jintao, Xi’s predecessor in China’s top two posts.

Youthful organizers of recent protests say they’ll be back this summer, perhaps even on May 1, following a lull due partly to the coronavirus. They hold both economic and political grievances and blame many problems on China’s role. For example, many college graduates consider the local economy tilted against them, with the best career jobs—such as in finance—going to young mainlanders who have superior command of official Mandarin (and often English) and may have mainland connections that Hong Kong businesses find helpful. Often relegated to second-tier positions, young people worry about ever affording their own homes in a city with perhaps the world’s highest housing costs and one of the world’s greatest income disparities between rich and poor. And because no Hong Kong autonomy is guaranteed past 2047, young people worry about their long term future if Communist Party restrictions are mandated.

This anxiety feeds localism, the sense that young people above all are Hong Kongers and less so citizens of China proper, where authorities don’t reflect their concerns. And that is poison in Beijing where separatism of any kind isn’t tolerated. As a senior official noted recently, protesters have “colluded in a bid to turn Hong Kong into an independent or semi-independent political entity, and a base for infiltration, sabotage, secession and subversion against China.” Beijing repeatedly blames foreign “black hands”—mainly American and British—for promoting such dissent. In particular, it fears letting Hong Kong truly manage its own affairs will prompt similar desires across the border, where no mainland entity can do so.

If major protests resume and include violence, a tough response is likely. The Hong Kong police, according to reports, are receiving special training from the mainland’s People’s Armed Police—crowd control specialists—who teach China’s harsh “philosophy” of law enforcement which includes greater use of modern technology. Mass arrests could ensue, with perceived ringleaders getting little mercy from baton-wielding officers. The goal would be to bring demonstrations to a forceful end. More than seventy-six hundred were arrested in past demonstrations.

There could also be a cancelation of legislative elections scheduled for September. Last year anti-mainland sentiment let pro-democracy candidates win unprecedented victories in voting for District Councils, neighborhood bodies that deal with basic issues like trash collection and street-cleaning. Pro-democrats hope this feeling will endure and let them score more wins, perhaps a majority, in voting for the seventy-member Legco. That’s unlikely because half are selected by interest groups generally loyal to Beijing for political or commercial reasons, rather than by public ballot. But major gains would be an embarrassing setback for Chinese authorities, so the Lam government may be told to call off elections or at least rig the system to exclude opposition candidates—some of whom have already been banned.

At present, pro-government forces act as if the elections will occur. Two former chief executives, who left office in disgrace but still faithfully echo the party line, have formed a large coalition of establishment figures who support candidates the mainland favors. They seem to assume the unpopular Lam administration needs a boost if its side is to win. “The patriotic pro-Beijing forces should grasp the chance to unite themselves to hit back at the opposition camp and their foreign allies,” asserts Lau Siu-kai, head of a political group that supports the new coalition.

If Beijing does interfere more directly in the voting, then there will be little pushback from Lam who admittedly has a near-impossible job. She once told a business group that she must serve two masters—authorities in Beijing and the Hong Kong public—and resolving differences is never easy. But she has reflected China’s interests in ways, and with a governing style, that leaves the impression that local priorities come distinctly second. Even taking a recent 10 percent pay cut to show solidarity with a public battered by a virus-caused economic relapse didn’t help much; that came only a day after being widely criticized for accepting a scheduled 2.36 percent raise that leaves her, at more than $600,000 per year, one of the world’s highest-paid politicians.