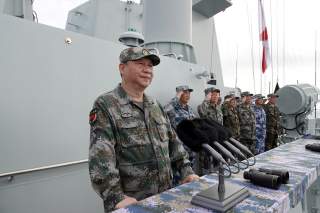 Drones of all types are leading a revolution in military technology. Originally spurred on by the battlefield imperatives of the wars in Iraq and Afghanistan, unmanned aerial vehicles are now emerging at the heart of future warfare plans; not just at the low end, but increasingly to address high-end threats as well. For example, the MQ-4C Triton may well be the most promising new technology to undergird U.S. strategy across the vast expanses of the Asia-Pacific region. Progress on and under the water has not been quite as rapid, but there have been some exciting breakthroughs there as well. For example, the testing by the U.S. Navy of an extreme long-endurance unmanned surface vessel (USV), Sea Hunter—a development covered in this Dragon Eye column early last year.

Not surprisingly, China is hard at work on its own “ultra-long-endurance USV [超长续航无人艇]” for anti-submarine warfare and other tasks. Beijing is already on the brink of fielding a long-endurance UAV that could radically improve Chinese ISR and threaten U.S. carrier battle groups. But among the myriad “fronts” of the artificial intelligence (AI) rivalry that is emergent between the United States and China is the tantalizing capability to fuse the benefits of UAVs together with the benefits of UUVs in a single hybrid aerial-underwater drone. In China, such a vehicle has been dubbed as a “Water Air Medium Leaping Vehicle [水空介质跨越航行器].” According to the lead article in the December 2017 edition of the Chinese military journal Aerodynamic Missile Journal [飞航导弹], research on Beijing’s Hybrid Unmanned Aerial Underwater Vehicle (HUAUV) “has already begun [已经起步].” That claim is buttressed by the note on the article that the research is paid for by a national-level grant and the research team is comprised of students and faculty at the PLA Air Force Engineering University [空军工程大学]. Chinese researchers believe that such a vehicle could combine the best characteristics of both aerial and also underwater vehicles. It could have the speed and range of a UAV, but then simultaneously could possess the stealth advantages of a UUV. Chinese researchers project that the possible future uses for such a vehicle are “extremely vast [非常广阔].”

This Chinese study contends that HUAUV development can be divided into four main issues, including the external shape, the propulsion, the vehicle’s control system and its method of communications. It is noted that given the differences in the two physical media (air and water) that the design principles for UAVs, or alternatively for UUVs, are often in complete contradiction. The creation of a Chinese HUAUV is said to “confront major technical difficulties [面临重大的技术难题]” and so the research remains in the theoretical and modeling phase, for the present. Appraising the history of relevant design work around the world, the Chinese researchers highlight a Soviet design that was made in the 1930s of a vehicle that was simultaneously a submarine and also an aircraft. This was to be a manned vehicle, but it was planned to have a range of eight hundred kilometers and could also dive down to forty-five meters and could stay submerged for up to forty-eight hours.

Not surprisingly, much of this article is devoted to descriptions of various related projects that are underway within the United States. Thus, a DARPA design from 2008 is briefly explored (with an accompanying basic blueprint design) for a manned vehicle that could fly 1,852km, then continue on the ocean surface for 185km, while then dropping beneath the waves for the final approach of 22km of sub-surface navigation as it neared the adversary’s coast. Another American design profiled in this article is the submarine-launched Cormorant [鸬鹚] of Lockheed Martin, which was cancelled in 2008. This evaluation implies that the Cormorant was actually not a genuine HUAUV, since it was not designed to make multiple transitions from undersea to air (and back again) on its own. Considerable attention is lavished on another American design (or family of designs) called “Spectra” in the Chinese article, but referred to possibly as “Flimmer” (flying swimmer) in current U.S. Navy parlance. Twelve different small photos in the Chinese article show this vehicle in tests transitioning from air to underwater.

The Chinese authors make the obvious point that wings are unusual for UUV designs that mostly resemble torpedoes, but that some kind of wings “are essential [是必不可少的]” for UAVs to take flight. For a design that “transforms its shape [用变体方案],” China is said to be in a strong position since it has been conducting research on cruise missiles that alter their shape for enhanced flight since the 1970s. The engine design presents researchers with many dilemmas, of course, including whether to use a piston engine or a jet engine. Underwater, there is the question of using electric propulsion or thermodynamic propulsion. In general, the designers must decide whether to produce two distinct propulsion systems or to attempt “blended propulsion [混合动力].” With respect to communications, Chinese designers are exploring the possibilities of employing either neutrino [中微子] or quantum [量子] technologies. It is noted, moreover, that blue-green lasers can reach to a depth of six hundred meters, but it is also said that these mechanisms are only in the early stages of research. Concerning control technologies, the paper notes Chinese researchers already have a wealth of experience in this area. Yet, it is assessed that integration on this vehicle will be a major obstacle to development.

Notably, the Chinese authors of this paper do see certain possibilities for civilian applications of the HUAUV. For example, they point out the vehicle could be useful for large-scale bridge monitoring and repair [大型桥梁检修], since it could investigate structures both underwater and from an aerial vantage point. Likewise, these vehicles could be usefully involved in surveys, salvage, search and rescue, laying fiber optic cable, etc. In the military domain, the proposed vehicle could significantly outpace the surveillance capabilities of other vehicles. Moreover, the HUAUV could “rapidly approach the target area for the purposes of concealed delivery . . . and use miniature weapons to destroy enemy radars and such electronic facilities [快速接近目标区域实现隐蔽载运的目的 . . . 微型攻击武器摧毁敌方雷达等电子设施].” Other envisaged military applications apparently include target searches, communications relay, area risk assessment, rapid scout of sea lanes, mine countermeasures, and also anti-submarine warfare.

The hybrid aerial undersea drone is unlikely to be a reality for some time because of the related complexities. At this point, however, one cannot completely rule out that Chinese designers might reach this “holy grail” of AI first, even if that is still unlikely. American strategists must increasingly grapple with the uncomfortable reality that Chinese designs could actually prove superior in key military domains. For now thankfully, those areas remain relatively few, but the military balance in the Western Pacific is now witnessing a dynamic shift.

Lyle J. Goldstein is Research Professor in the China Maritime Studies Institute at the United States Naval War College in Newport, RI. In addition to Chinese, he also speaks Russian and he is also an affiliate of the new Russia Maritime Studies Institute at Naval War College. You can reach him at [email protected]. The opinions in his columns are entirely his own and do not reflect the official assessments of the U.S. Navy or any other agency of the U.S. government.