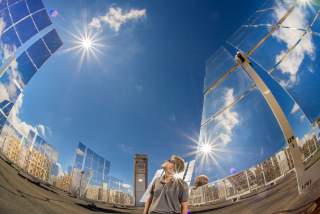 China’s ability to strike back at the U.S. proposed tariffs on Chinese imports was made dramatically apparent last week when markets reacted negatively to China’s devaluation of the yuan and the announcement that it would impose an additional $75 billion in tariffs on U.S. goods. The U.S.-China trade war has affected businesses from Apple to American cherry growers and shows no signs of halting. President Donald Trump responded with additional retaliatory tariffs and a storm of tweets, demanding American businesses to “immediately start looking for an alternative to China” and leaving the country altogether. At the root of this trade war is the Trump administration’s belief that the economy and security are intrinsically linked, notably in the realm of telecommunications.

Telecommunications has become the nexus of U.S. frustration at unfair Chinese trade practices and concerns that the Chinese government is utilizing the networks of private Chinese corporations to spy on foreign governments and corporations. At the center of the debate is the leading Chinese telecommunications firm Huawei, which has been accused of poor ethics, shoddy security, intellectual property theft and even spying for years.

In response, the Trump administration has signed an executive order that has all but named and banned Huawei products, and is appealing to allies to do the same. Trump contends that the negative impact on the U.S. economy in the short term is “irrelevant” because “somebody had to take China on” and his belief that the U.S. will be better off in the end. Yet, the profuse debate around Huawei and the Trump administration’s trade war reveals a fundamental weakness in the American economy: its lack of competitiveness.

In addition to allowing consumers to download movies and browse the internet at high speeds, fifth-generation (5G) mobile networks will fundamentally alter the economy; the Internet of Things, smart manufacturing, automation and defense will be built upon the new network. Whichever country leads in 5G development will engineer and manufacture not only the network itself, but the applications and devices accompanying it. As 5G spreads, so will related devices and technologies, making this country the global leader in wireless technology.

Huawei’s entrance into the American 5G and broader telecommunications market concerns security experts. The Chinese government and Chinese companies have continually infiltrated U.S. corporations and government agencies: the data breach on the Office of Personnel Management, the theft of NSA cybertools, and the ongoing hacking of prominent American businesses are a few recent examples of these determined efforts. Furthermore, the Chinese government mandates that all telecommunications equipment installed or manufactured in China retain backdoor access, exemplified recently with security camera manufacturer Xionmai. This means that allowing Huawei components to be installed throughout the U.S. telecommunications network would leave the United States vulnerable to infiltration.

Although the United States should continue to defend against potential security threats posed by Chinese firms, it should not rely on these protections only as a strategy to maintain competitiveness. The erosion of U.S. dominance in other key sectors, such as automobiles and consumer electronics, suggest that there are more fundamental problems.

According to Sandra Rivera, an executive vice president at Intel: “There is no U.S.-based wireless access equipment provider today that builds [5G] solutions.” Considering the critical economic and security interests associated with 5G, it is alarming that the United States has not shown greater leadership in developing it, losing ground to Huawei and other international competitors. 5G is the technology of the future, yet the United States is not even a competitor. A willingness by the United States to invest in 5G would sideline the entire Huawei debate.

American competitiveness has also declined in other industries. For example, while U.S. robotics development may have peaked, China’s robotics industry is advancing at an incredible rate. Last year China installed 136,000 robots, dwarfing the 34,000 installed in the United States, leaving the United States disadvantaged in worker productivity. In 2026, China is forecasted to become the world’s largest user of robots.

China has been making similarly impressive inroads in artificial intelligence: by 2020, China is expected to surpass the United States in the number of artificial intelligence (AI) research papers published, even when controlling for research quality. In contrast to the United States, where most research is conducted with private funding and oversight, most Chinese research receives government support and funding.

Energy, biotechnology, shipping and electric vehicles—high-tech, high-value industries that have historically been dominated by the United States—have all seen considerable progress by Chinese companies. But these companies benefit from Beijing’s willingness to subsidize high-tech industries. A small glimpse of the subsidies provided by the Chinese government include $58.8 billion in support for electric cars between 2009 and 2017, $435 million contributed to solar this year, and $65.5 billion Guangdong province plans to invest in strategic industries including robotics. When necessary, the Chinese government is willing to bankroll valuable industries to ensure their success and promote international dominance.

U.S. lawmakers are beginning to take note of China’s strategy. Recently, a bipartisan coalition of senators unveiled the 5G Leadership Act, promising $700 million to replace Huawei telecommunications tech in rural American communities. Though it mitigates vulnerability to Chinese influence, this legislation fails to offer a plan for promoting the innovation of American alternatives. As such, its $700 million is merely a costly band-aid.

More than Just a Spoiler

While the Trump administration has legitimate national security reasons for banning Huawei tech, the ban does not address the U.S. decline as a global leader in research and technological innovation.

Huawei tech poses an apparent threat to both national and corporate security, but the current approach of eradicating already-installed equipment, banning its future use, and urging allies to follow suit without offering an American product comparable in quality and price has a range of unintended consequences. Not only does it imperil U.S. access to the cutting edge of technology and 5G connectivity, but it is also halting efforts to expand access to basic wireless connectivity in the same rural areas Trump promised not to ignore.

If the United States wishes to maintain its high-tech leadership, it must be willing to invest in the industries critical to success in the twenty-first century. This investment doesn’t need to be monetary only; it could be regulatory. The United States recently ranked forty-sixth in the world for ease of starting a new business, behind Afghanistan. It could be in human capital; the cost of higher education has ballooned to 11.1 times what it was in 1980. Or it could be in immigration reform; over a third of U.S. venture-backed startups have at least one foreign-born founder. Possible solutions abound, but what is clear is the United States needs to do something. By doing nothing, Washington is ensuring its future technological irrelevance.