China Is Winning the Race for Water Security in Asia 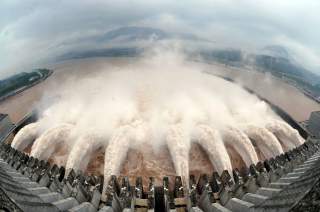 Great power competition in Asia is not only about control of critical waterways in the South China Sea, but also about who controls Asia's fresh water. The future of Asia's water—upon which about four billion people depend—lies in China's hands. Through its presence in Tibet, China controls the headwaters of ten of the eleven major rivers of Asia. So far, China has taken a relatively cooperative approach to sharing water with its neighbors as part of the systematic consolidation of its "soft power" over downstream countries. But climate change and rapid growth are threatening to upset this delicate diplomatic balance. What happens when China's own thirst outpaces its resources? And how will China's choices affect U.S. interests in the strategic Asia-Pacific region?

China has positioned itself as a world leader on climate change and set ambitious goals for environmental protection. However, due to the pace of urban as well as industrial expansion and its often-lax enforcement of pollution control regulations, China continues to consume as much coal as the rest of the world combined. Its approach to combatting climate change and resource scarcity, which emphasizes engineering solutions over better resource management, has resulted in dramatic infrastructure projects. These include a series of hydro-electric dams meant to address the country’s severe water shortage challenges by giving it more control over the continent’s rivers, as well as to generate electricity.

These construction projects mean China can bestow or withhold water as it sees fit, leaving downstream Asian countries vulnerable to Beijing's decisions. For example, Chinese hydroelectric dams along the Brahmaputra River have proven to be a source of friction with India, exacerbating long-simmering border disputes. Critics point to China's South-North Water Diversion Project, which plans to divert water from the Brahmaputra to industry and cities in northern China. Although Chinese leadership has disavowed these plans, engineers have pushed for the project. Already, China has dammed and now controls the flow of the Mekong River. Yet complaints about the Mekong have been muffled, compared to India’s outcry over the Brahmaputra, in part because China has little to fear from smaller countries like Laos, Thailand, and Cambodia.

So far, it is in China’s interests to stay on friendly terms with its neighbors, and cooperation is consistent with the government’s strategy to expand influence in the region through a “charm offensive.” For instance, when Vietnam suffered its worst drought in nearly 100 years in 2016, China released additional water in the Mekong for emergency use.

At the same time, China’s steadfast refusal to enter into any transboundary water agreements means its collaborative attitude will last only so long as it is politically expedient. During the Sino-Indian military standoff in Doklam last summer, China appeared to suspend sharing its hydrological data, which India uses to improve flood forecasts. The data cutoff allegedly contributed to a series of floods in northeastern India that left seventy-one people dead and 400,000 homeless. Local officials attributed the disaster to China’s refusal to share water level data, arguing that the rainfall in India was below expected levels and therefore could not be responsible for the floods. This incident is a worrisome indicator of Chinese willingness to embrace water’s potential for weaponization in regional disputes.

Furthermore, while water is a source of soft and perhaps even hard power for China, it is also an existential concern. The country faces serious constraints on its water supply as well as deteriorating quality, and it is these domestic concerns that have driven its water infrastructure development. China’s per-capita annual renewable water availability is around 2,140 cubic meters, compared to over 10,000 for America. Furthermore, since the 1990s, losses from drought have been equivalent to 1.1 percent of China’s average annual gross domestic product, or about $41 billion.

Right now, water is one more tool in China's broader push to consolidate regional power. In ten years, when water has become even scarcer and demand is higher, the calculus will likely be less complex and even more ominous. While it might be in China's strategic interests to stay on friendly terms with its neighbors, the thirst of its own citizens will always come first.

Weather projections bear out these fears. Climate change will fundamentally alter weather patterns throughout Asia, starting with significant temperature increases. By the 2030s, half of all summers will be warmer than the record-hot summers of the past forty years. Elevated areas like the Himalayas—where most of the water that feeds Asia’s rivers is stored in glaciers—will warm even faster. Freshwater availability in most parts of Asia, particularly in large river basins, will decrease.

Growing competition for diminishing resources will have serious security implications for Asia. China’s upstream advantage coupled with its ongoing construction of water infrastructure all but guarantees that it will emerge the winner. For the downstream communities that rely on rivers to provide critical sustenance to agriculture, people, and ecosystems, such an outcome would have profound implications.

Development experts continue to push transboundary water frameworks as the solution to Asia’s water disputes. They are right to do so, but China is unlikely to be ever willing to be yoked to any type of formal agreement. That leaves downstream countries with little choice but to embrace the status quo, and to continue their current strategies of courting Chinese investment and increasing their economic interdependence.

For the United States, it makes the management of Sino-American relations even more urgent. The Director of National Intelligence has already identified South Asia as particularly vulnerable to water insecurity. But America has taken little action to mitigate these threats.

Japan, America’s most important ally in Asia, has repeatedly voiced its concern about diminished U.S. leadership on climate change. A worry expressed at a recent conference held by the Japanese Ministry of Foreign Affairs was that Japan had received mixed signals on the reliability of American support and that U.S. withdrawal from leadership on climate issues could further erode American influence in Asia.

The effects of climate change on Asia's water security could drive China's neighbors to align more closely with the country with its hands on the tap. This alignment could undermine U.S. influence, and drive the region toward a multipolar leadership structure that favors China. The efforts of defense and security policymakers to counterbalance a rising China ignore the implications of water security at their peril.

Sherri Goodman is a Senior Fellow at the Woodrow Wilson International Center and the Center for Climate & Security, and a former Deputy Undersecretary of Defense (Environmental Security). She is the former CEO and President of the Consortium for Ocean Leadership and the founder of the CNA Military Advisory Board.

Zoe Dutton is an intern at the Wilson Center.