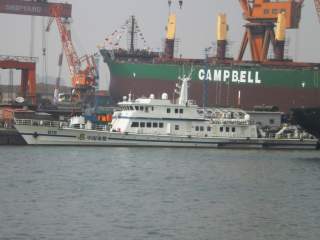 Maritime disputes in the East and South China Seas are often seen as synonymous with the region’s rapid and well-documented naval buildup. It is only in recent years, however, that civilian maritime law enforcement (CMLE) forces have emerged into the picture. While world attention remains focused on the proliferation of high-powered, ‘big ticket’ naval capabilities such as submarines and anti-ship missiles, a CMLE competition amongst claimant states in those maritime flashpoints is rapidly growing. The implications of this competition are wide-ranging insofar as peace and stability in those disputed waters are concerned.

For this reason, a recent buildup by the China Coast Guard (CCG; Zhongguo Haijing) deserves attention. Chinese sources indicate what appears to be the second of its giant offshore patrol vessels (OPVs) nearing the stage of induction earlier this month. Bearing the hull number 3901, this cutter was photographed fitting out in a shipyard. It has earlier been seen conducting various harbor and sea trials. Once fitting out is complete, 3901 will be formally commissioned.

In fact, Haijing 3901 is not alien to those familiar with the CCG buildup. It is the second unit following the lead ship, 2901, which has already completed fitting out and has been assigned to the East China Sea Branch. When sketchy information (including the first pictures of it under construction) emerged in January 2014 of what was then said to be a “monster” OPV, it caused quite a bit of excitement. Its physical size—estimated by Chinese sources to displace between 10,000 and 12,000 tons full-load—trumps Japan Coast Guard’s Shikishima class, built in the early 1990s and which displaces 6,500 tons, as the world’s largest CMLE ship. Equally amazing is the rate of construction, considering 2901 and 3901 would be inducted within a small time gap.

As a rule, CCG ships do not bear names, unlike PLA Navy surface ships. They are typically referred to by hull numbers (with a prefix denoting their organizations; for example, Haijing 3901) which reflect the unit/locality and technical specifications of the particular ship in service. Hull numbering come in four or five digits and may have nuanced differences, especially for operational security reasons; or if the intended numbers coincide with pre-existing ones.

For those with four-digit hull numbers, the first digit usually refers to one of the three CCG branches. “1” denotes the North Sea Branch; “2” the East China Sea Branch and “3” the South China Sea Branch. For vessels bearing five-digit hull numbers the first two digits denotes their locality. For example, for vessel 31239—the first armed CCG ship that appeared off the Senkaku/Diaoyu Islands disputed with Japan in late December last year—“31” refers to Shanghai, where the ship is stationed. The second digit is usually the ship’s displacement; for example, “0” refers to a displacement of less than 1000 tons, and so on. The final two digits denote the unit built in the series, or the last two digits of the particular ship’s previous hull number prior to transfer from another service. Again using the example of Haijing 31239, the final two digits “39” takes after the former hull number 539 in previous navy service.

The first oceangoing Chinese CMLE ship deployed to the South China Sea was the 3,000-ton Haixun 31 of the separate China Maritime Safety Administration in April 2009. For a period, this was the largest Chinese cutter operating in the area.

It was not until March 2013 that the Chinese finally upped the ante in the South China Sea by deploying the 5,000-ton Yuzheng 312, which is a former PLA Navy tanker. Subsequently, in January 2014 Beijing mulled permanently stationing a patrol ship of at least 5,000 tons at the newly-created Sansha City on Hainan Island, and this coincided with an announcement that China Shipbuilding Industry Corporation is planning to build a 10,000-ton vessel for the CCG.

The new Haijing 3901 now becomes, by far, the largest cutter to be built for the CCG South China Sea Branch. It also dwarfs all other types of CMLE vessels that rival claimants in the disputed waters can field in terms of size, including the Vietnam Coast Guard’s 90-meter, 2,500-ton DN-2000—a modified OPV-9014 design from Dutch shipbuilder Damen, which is built locally in the affiliated Song Thu Shipyard.

Should this development constitute a cause for concern?

CMLE vessels, popularly known as ‘white hulls,’ are often assessed to be less destabilizing than ‘grey hulls’—the regular naval warships. The former tend to be lightly-equipped, usually with search radar, electro-optic sensors, extensive navigation and communications systems, and water cannon for some. They also usually sport one or more small motorized boats for vessel boarding and for search and seizure operations. Larger and better-equipped CMLE vessels are designed for sustained missions at huge offshore distances, in high sea states and under all-weather conditions. They may be additionally fitted with a landing pad (and a hangar if space is sufficient) for one or even two helicopters. Such vessels are versatile thanks to mission modularity, which allows them to perform various roles such as disaster relief, fishery protection, pollution control and search-and-rescue.

But what makes ‘white hulls’ less destabilizing compared to their ‘grey’ counterparts are the lack of offensive armaments. Usually machine guns are mounted, or at most just a medium-calibre deck gun as its main armament, often with minimal electronic fire control equipment.

Nonetheless, some CMLE forces may have a secondary wartime role. For example, U.S. and Taiwanese coastguard cutters can be given “emergency retrofits” of offensive weapons such as anti-ship missiles to serve as reinforcements to their regular naval counterparts. But CMLE vessels are typically tasked for low-intensity, constabulary-type missions instead of fighting ‘hot wars,’ in the event of which they are usually not as survivable as warships. Their structural designs are closely based on civilian marine standards, therefore not capable of withstanding serious combat damage.

While rival Southeast Asian coastguards in the South China Sea may match—and in some cases, surpass—China in the quality of vessels, since many have been acquiring high-end (and certainly more expensive) Japanese or Western designs, the CCG possesses an unparalleled advantage in having more funds to pursue more expansive programs. While receiving hands-me-down vessels from the Navy the CCG is also furiously building new, larger and better equipped OPVs. Moreover, it can take advantage of the cheaper labour and raw material costs in China’s shipbuilding industry.

There are also indications that like the Navy, the CCG is standardizing common designs to hasten series production. For example, the CCG’s new 1,500-ton (estimated) OPV Haijing 44104 shares certain commonalities (especially the hull) with the Navy’s Type-056 Jiangdao class corvette.

The CCG’s Future in the South China Sea

If recent trends are of any indication, the CCG buildup is a serious cause for concern. Chinese ‘white hulls’ have formed the spearhead of some of the most aggressive ‘sovereignty enforcement’ actions in the South China Sea.

February 2014: CCG ships frustrated attempts by the Philippine military to resupply its small garrison stationed on board the disused landing ship Sierra Madre, at the Second Thomas Shoal.

May 2014: During a standoff over the Chinese oil rig HYSY-981 in disputed waters off the Chinese-occupied Paracel Islands, CCG ships rammed and fired water cannon at the Vietnamese.

January 2015: Beijing claimed that the CCG “slightly rubbed against” Filipino fishing boats off the Scarborough Shoal, following Philippine reports that the boats were intentionally rammed by the Chinese.

June 2015: Malaysian authorities revealed that the CCG has been maintaining a presence off the Luconia Shoals, at the southern end of China’s nine dashed line, for over a year, and allegedly harassing Malaysian fishermen in the area.

Ship size and propulsion power matter in a close-encounter duel involving vessel ramming (having strengthened hulls can be a bonus). Haijing 3901 will prevail in any future standoffs against the much smaller, underpowered Southeast Asian rivals’ CMLE vessels.

The largest rival ‘white hull’ in the South China Sea, Vietnam’s DN-2000, may match most other CCG vessels around the same size. But it is certainly outclassed by Haijing 3901 should Beijing choose to deploy it in a future Sino-Vietnamese standoff. Furthermore, under the veneer of ‘civilian law enforcement,’ these ships will even challenge rival naval forces—an unwelcome prospect since the Code of Unplanned Encounters at Sea (CUES) adopted at the Western Pacific Naval Symposium in April 2014 applies to navies but not CMLE forces.

If using Haijing 3901 to pit against the weaker Southeast Asian rivals is deemed an overkill, then a more likely target in mind to be the U.S. Navy. With its full-load displacement of up to 12,000 tons surpassing even that of the U.S. Navy destroyers, such as the Lassen which conducted freedom of navigation operations off a Chinese artificial island last year, Haijing 3901 poses a serious challenge.