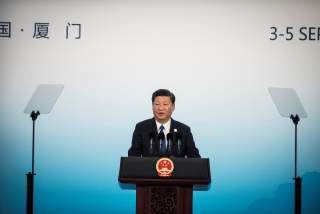 The Communist Party will convene its week-long Nineteenth National Congress in Beijing on Wednesday. Xi Jinping, just proclaimed “the world’s most powerful man” by the Economist, looks like he has set in motion a chain of events that will lead to the end of China’s one-party state. Expect a period of intense infighting that is in many ways reminiscent of the Maoist era.

At the Congress, now held once every half decade, Xi will almost certainly get another five-year term as general secretary of the party. Moreover, he will surely be successful in stacking the Politburo Standing Committee with allies, yes, men in common parlance.

Xi, in short, is ascendant. The Economist says he has more “clout” than President Donald Trump. And the Chinese leader is about to get even more of it.

There are many things to watch for when 2,287 delegates convene at the center of Chinese power this week. The most significant developments involve the so-called norms of succession.

Two norms in particular are in jeopardy. First, there is the “seven-up, eight-down” rule, which was introduced in 2002 at the Sixteenth Congress. According to this formulation, political figures who are sixty-seven years old or younger at a Congress are eligible for selection to the Politburo Standing Committee, the party’s highest decisionmaking body. Those who are sixty-eight years old or older must retire.

There are now seven members of the Politburo Standing Committee and five of them would be ineligible for reappointment if that rule were followed. Most prominent among the oldsters is Wang Qishan. Wang, a Xi ally, is chairman of the party’s Central Commission for Discipline Inspection. As such, Wang has led a relentless political purge, which has been styled by its supporters as an anti-corruption campaign.

Most observers believe that sixty-four-year-old Xi wants sixty-nine-year-old Wang to continue in the role as purge-master. Xi, according to a retired Chinese official who spoke to the New York Times, believes that the age rule is “not absolute.”

In a sense, Xi is correct. The party’s various rules have, to put it politely, evolved. They have been bent, rewritten and ignored as circumstances—and the personal needs of the powerful—have dictated.

Observers are looking at Wang’s fate as a clue to Xi’s. The rationale is that, if age limits are no longer enforced, then Xi will be free to stay on after he passes the age of sixty-seven. More important, he would have a precedent to break another fragile norm, the limit of two five-year terms for general secretaries.

So far, Xi has not allowed the selection of his successor, who, according to precedent, would be revealed by the time of this congress. Many believe—and some fear—that Xi is scheming for a third five-year term or possibly for more.

We will find out how bold Xi is at the first plenum, where the party reveals the new Standing Committee lineup. Then, the day after a congress closes, the country’s leading men literally walk out from behind a curtain. “We obviously don’t know what Xi will do at the congress, but it is clear that he has given himself all the flexibility he needs to bypass the evolving institutional arrangements that have governed leadership changes in the past two decades,” Richard McGregor, the author of The Party: The Secret World of China’s Communist Rulers, told the National Interest this month.

Yes, Xi is a master of the bypass, or as Robert Blohm, a China advisor, told me, “he’s a maneuverer.”

That means Communist Party norms—some call them merely guidelines or understandings—have a lot in common with pastry. “The Chinese follow Lenin’s ‘rules are like pie crusts, made to be broken,’” University of Pennsylvania professor Arthur Waldron told the National Interest in regards to Nineteenth National Congress infighting.

The rules, such as they are, were developed to prevent the unrestrained infighting of the Maoist period. As Charles Burton on Brock University told me recently, “With the death of Deng Xiaoping in 1997 and the waning influence of the Eight Elders, who had been the ultimate stabilizing authorities in China’s political system in the post-Mao 1980s and 1990s, the party moved to establish conventions for stable political successions.”

The Communist Party, in short, had appeared to solve the one great weakness in its authoritarian system, the transfer of power from one leader to the next. Moreover, from Mao Zedong to Hu Jintao, each leader of the People’s Republic of China was weaker than his predecessor, reducing the stakes in leadership transitions.

The willful Xi Jinping looks set to upend convention and take greater power than any leader since Deng, perhaps ultimately grabbing as much power as Mao.

Some, such as the influential Christopher Johnson of the Center for Strategic and International Studies, think that Xi breaking rules is, or at least could be, a good thing. Anything in China is possible, but the far more likely result of rule-breaking is another long, disastrous period for China.

Johnson himself recognizes concerns as he talks about, among other things, the possibility of “a dangerous personality cult.” The Economist even raised the specter of another abnormal period. “Think of Mao and his Cultural Revolution,” the publication states this month. In this new period, Maoist or not, a strongman can stay for as long as he can hold onto power.

Burton believes Xi cannot assume Mao’s “unique Lenin-like role,” but he may try to become contemporary China’s “Stalin-like figure,” whose rule, like Mao’s and Stalin’s, “would become absolute until his death.”

Deng Xiaoping’s genius was to limit the tenure of China’s rulers and reduce the cost of losing political struggles, thereby reducing the incentive to fight to the end and tear the Communist Party apart. Xi, on the other hand, is raising the incentive to struggle viciously.

Xi could himself become a victim of vicious struggles. “With no succession mechanism in place, Xi would be vulnerable to military and political coup attempts by his subordinates,” Burton told me. “Therefore like Mao and like Stalin, Xi Jinping would have to implement increasingly ruthless measures to suppress political alternatives to his unassailed rule.”

Xi in his first years in power demanded “absolute loyalty” and was extraordinarily repressive, and perhaps that is an indication he knew where he was taking the party and country. Whether or not Xi is trying to transform a collectivist decisionmaking process into a Maoist one, he is pushing China in extremely troubling directions.

When things go right for China—Waldron says China is “on a roll”—Xi benefits. When things go wrong—as they must at some time—his adversaries will pounce, as they pounced on Mao after the Great Leap Forward, and before he decided he had to launch the Cultural Revolution to protect himself.

“Watch out for the chaos licensed to follow,” warns Blohm, who lived in China for many years but now resides in Toronto. “Build the party around one man and he falls, then anything is possible.”

For most people, the failure of the modern Chinese state is inconceivable, but it should not be. China has progressed about as far as it can within its current political framework. “It is impossible to make a modern state without modern institutions,” Waldron says. “Xi may think China is an exception, but it is not.”

China, despite appearances, is not modern, and it looks set to be the example of what can happen when nineteenth century absolutism fails in the twenty-first century.