China's Actions Are Causing U.S. 'Militarization' of the Pacific 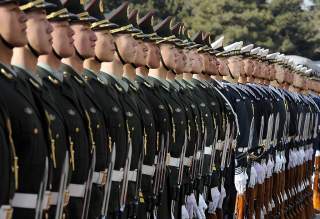 Last month Asia defense analysts Nicholas Borroz and Hunter Marston argued in an op-ed in the New York Times that Washington’s excessive “focus on militarization” is “a recipe for conflict” with China in the Asia-Pacific. This provocative piece—in effect questioning a key component of the U.S. strategic rebalance, or “pivot” to Asia policy—arrives at an important time in the United States, with the presidential election only days away and every U.S. policy position seemingly up for debate and reevaluation. While their commentary headlined “Washington Should Stop Militarizing the Pacific” is timely, the reality is that the U.S. alliance structure they critique has provided regional peace and economic prosperity since the end of World War II. Until Beijing’s rising confidence caused it to challenge Washington’s position in the region, the system had existed virtually unchanged.

In 2009, China submitted its so-called “Nine-Dash Line” sovereignty claim over large swaths of the disputed South China Sea to the United Nations. The United States responded with Secretary of State Hillary Clinton’s 2010 statement on the importance of freedom of navigation and peaceful resolution of disputes in accordance with international law. Since 2010, Beijing has ignored U.S. and international calls to resolve disputes peacefully, prompting the Obama administration in 2011 to announce the strategic rebalance policy and, as part of it, to strengthen Washington’s military posture in Asia. Again, this only occurred in response to Chinese actions.

Unfortunately, China has consistently demonstrated that it has no plans to reverse or modify its behavior in the South China Sea. Beijing’s rhetoric toward neighboring countries has been particularly aggressive and threatening. For example, during the most recent meeting last month of Non-Aligned Movement (NAM) nations, Beijing—through its state-run newspaper Global Times—reprimanded Singapore for allegedly attempting to endorse the Permanent Court of Arbitration’s July ruling against China’s South China Sea claims in the NAM Summit Final Document. The editor pointedly responded to the Singaporean ambassador’s disagreement with the Global Times article by stating that “most ASEAN countries deal with the sensitive South China Sea ruling in a balanced way” and “I think Singapore should feel ashamed when you tried to trip up China, your largest trading partner.”

Singapore is a non-claimant in the South China Sea and had successfully maintained a low profile until now. Claimants, however, routinely endure threats and criticism from Beijing. For instance, a source connected with the Chinese military recently said of Vietnam—China’s most formidable neighboring claimant—that “we should go in and give them a bloody nose like Deng Xiaoping did to Vietnam in 1979.” Beijing has also consistently denigrated Manila’s decision to turn to the Permanent Court of Arbitration to settle its disputes, with Chinese Premier Li Keqiang last month referring to the recent U.N. ruling as being “null and void.” (New Philippines president Rodrigo Duterte recently said he would walk away from the ruling in favor of better ties with China).

Borroz and Marston also quickly dismiss Chinese land reclamation efforts in the South China Sea instead of more critically interpreting these activities as unilateral and threatening actions against not only neighboring countries, but also Washington’s future ability to conduct military operations in the region. According to the respected Asia Maritime Transparency Initiative, since 2013 China has created 3,200 new acres of land out of islets and reefs in the South China Sea. It has also built three runways to project Chinese air power, to include use by both fighter and bomber aircraft, in the Spratly Islands and has added radar facilities as well as the HQ-9 air defense system to its Woody Island outpost in the Paracel Islands. China also now conducts routine maritime “sovereignty” air and sea patrols throughout the region. Beijing has also demonstrated a penchant for aggressive behavior with its neighbors. Chinese fishing ships regularly try to intimidate those of other claimants. If China is left unchecked, regional allies and partners believe they would have to fend for themselves—a prospect they worry about and have conveyed privately to U.S. interlocutors.

Given such behavior, it is curious that Borroz and Marston would choose to chastise U.S. policymakers, including President Obama, for being “condescending” and “patronizing” to China. There are many instances in which Chinese interlocutors have launched into equally unproductive recriminations against U.S. policy as well. By referencing China’s negative experiences at the hands of Western and Japanese powers from 1839 to 1949 during the so-called “Century of Humiliation”—which the United States notably had minimal participation in—Borroz and Marston in effect bolster China’s victimhood narrative instead of holding Beijing accountable for its own actions. Following the arbitration announcement, for example, Beijing claimed to be a victim of international bias to explain why it had decided not to abide by the ruling, even though it is a signatory to the international law of the sea.

Borroz and Marston also appear to play into China’s victimhood narrative by submitting that the United States has recently established new defense partnerships with Vietnam and India. In the case of Vietnam, President Obama visited there in May and lifted the U.S. ban on lethal security assistance, allowing Hanoi to purchase a range of offensive weaponry. This move should not be interpreted as a new defense pact as there has been no movement toward such an understanding. The authors also seem to misinterpret the implications of India signing a military logistics deal with Washington. New Delhi is reluctant to get into any formalized—and especially high-profile—military arrangement with the United States for fear of antagonizing China, and there is no evidence that Washington seeks such an outcome. On the Indian side, the fact that New Delhi went this far suggests much more about the level of concern among Indian leaders on the seriousness of the China threat than it does about the United States trying to establish a new defense partnership. Borroz’s and Marston’s apparent exaggeration of this point would appear to encourage China’s encirclement, or “containment,” narrative.

That said, the authors’ core argument is important to consider: Would a reduced U.S. military footprint in the Asia-Pacific logically result in a less confrontational China? While it is tricky or even impossible to prove a counterfactual, at least two ongoing security situations reasonably could become worse if Washington invested less militarily in the region.

First is the status of Taiwan. Since the United States began adhering to the “One China Principle” in 1979, Washington has been exceptionally sensitive to Beijing’s wishes to not recognize Taiwanese independence. Beijing, however, continues to prioritize developing military capabilities to coerce Taipei and ultimately, if deemed required, launch an amphibious invasion to retake the island. Washington’s routine arms transfers to Taiwan and the signaling of U.S. resolve almost certainly help defend it and are almost certainly the only factors standing in the way of Chinese ambitions to rein in Taiwan by force. If resolved peacefully, the Taiwan issue would likely do much to advance the cause for U.S. demilitarization in the Pacific.

A second security situation is the ongoing China-Japan standoff over the Senkaku or Diaoyu islands in the East China Sea. Although the current conflict began with Tokyo’s nationalization of the islands in 2012, Chinese military pressure since then has been unrelenting, with Beijing declaring an air defense identification zone (ADIZ) in 2013 over the East China Sea, and Chinese air and naval patrols becoming a regular occurrence near the islands. It is difficult to envision how a reduced U.S. military presence would support peace in this context. As much as China is trying to push Japan out of these islands, it has remained cautious to avoid provoking invocation of the U.S.-Japan alliance.

Borroz and Marston are on firmer ground when they assess the second-order effects of U.S. Terminal High Altitude Area Defense (THAAD) missile deployments by the end of next year to South Korea. Although U.S. officials have strenuously argued that the objective of THAAD is to intercept missiles launched from North Korea, Beijing contends that the system could easily be aimed at China’s nuclear capabilities. Whether or not this is true, it is fair to suggest that U.S. policymakers at least consider how THAAD might prompt China to develop new capabilities or modify its nuclear behavior and the potential implications for nuclear stability.

While Borroz and Marston criticize Washington’s military activities in the region, they do not seem to propose a realistic way of transitioning U.S. policy from military to “non-military” forms of collaboration in the region. China’s actions are increasingly threatening to key U.S. allies and partners who would be left to deal with Beijing alone were the United States to reduce its military footprint. Any change in U.S. policy must be premised on concrete, measurable and genuine changes in Chinese behavior.

Derek Grossman is a senior project associate at the nonprofit, nonpartisan RAND Corporation. He formerly served at the Defense Intelligence Agency as the daily intelligence briefer to the Assistant Secretary of Defense for Asian and Pacific Security Affairs at the Pentagon. The views expressed in this article are those of the author and do not reflect the official policy or position of the Defense Intelligence Agency, Department of Defense, or the U.S. government.