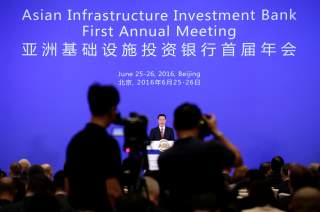 The Asian Infrastructure Investment Bank (AIIB) was supposed to be the keystone of China’s Belt and Road Initiative, but it has disbursed just $1 billion in its first three years of operation.

Back in 2016, the AIIB was touted and feared as the new colossus of development banks. Promoters pointed to Asia's need for trillions of dollars of new infrastructure. Critics feared that the AIIB would marginalize existing institutions like the World Bank and the Asian Development Bank (ADB).

The United States opposed the creation of a new, China-centered development institution for Asia, but the Obama administration’s efforts to sink the bank proved futile. In the end, sixty-six countries joined China as members of the AIIB, including close American allies like Australia, Canada and the United Kingdom. The AIIB opened its doors in January 2016 with $100 billion in subscribed capital.

With that kind of money at its disposal, expectations were that the AIIB would “lend $10 billion-$15 billion a year for the first five or six years” of its operations. The New York Times took this as proof that “China, with its vast wealth and resources, now rivals the United States at the global economic table.”

Yet in its first three years of operation, the AIIB has approved loans totaling less than $7 billion. And that includes the final tranche of loans for 2018, just approved at its December 7 board meeting. The amount of loans disbursed to date is almost certainly far less. For example, a $400 million AIIB loan approved last week for a water supply project in India will be drawn between 2019 and 2023.

In fact, the AIIB seems to have only $1.15 billion in total outstanding loans on its books, according to its third quarter financial statements. Vastly outweighing its loan book, it holds more than $8.5 in bank deposits and another $3.3 billion in trust funds. All of which raises an interesting question: who is the AIIB’s lucky banker?

Focusing on loans approved—which may or may not ever be disbursed—the AIIB’s new approvals this year were just $2.5 billion, down from $3.3 billion in 2017. To put that in perspective, the World Bank committed more money to India this year ($3.4 billion) than the AIIB announced for all of Asia. And the World Bank has a much stronger track record of disbursing its loans.

In three years of operations, the AIIB has committed a grand total of just $7 billion to thirty-four projects in thirteen countries. By far the largest beneficiary has been India, with nine projects totaling nearly $2 billion. Indonesia is second, with five projects totaling $940 million. 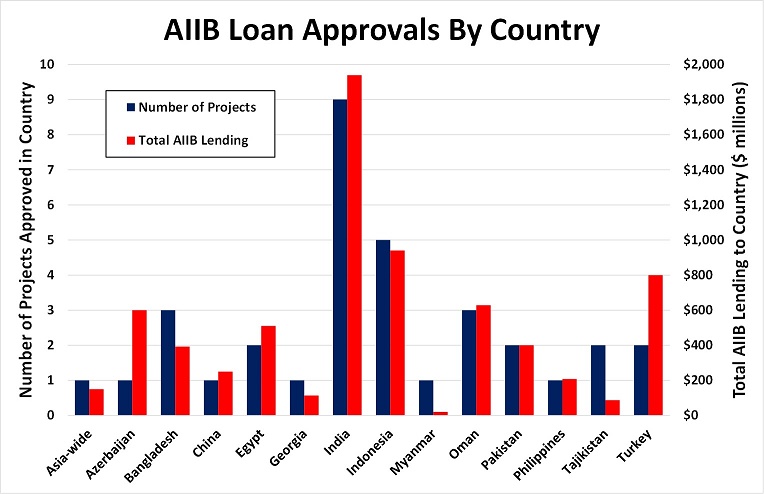 The average size of an AIIB lending commitment is just over $200 million, and the average level of AIIB participation in any particular project is just over 25 percent of the total cost. Generally speaking, the AIIB seems willing to participate as an investor in other people’s projects, but seems shy about funding projects of its own.

This is hardly the kind of transformational leadership that will reorient Asia’s trade routes toward an all-conquering Middle Kingdom.

Contrast the AIIB with the long-established ADB, which is led by Japan and the United States. The ADB has approved 279 projects so far this year. In 2017, it approved 281 sovereign projects worth $21.4 billion. Even the ADB’s minor program of nonsovereign lending to the private sector is roughly on a par with AIIB total lending. Yet no one talks about Japan gaining by economic stealth what it couldn’t gain by conquest in World War II.

The AIIB was supposed to lend $30-$40 billion in its first three years, transforming the geography of Asian infrastructure. In 2015, boosters and critics alike expected that to result in a China-centered Asia, if not a China-centered world. But today the big question about the AIIB isn’t “will China rule the world?” It’s “where’s China hiding all the cash?”