China's Belt and Road Initiative Is Stoking Tensions with India 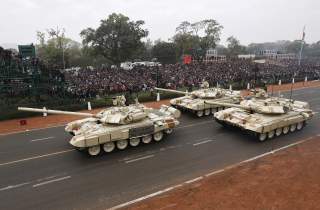 The Chinese Communist Party enshrined President Xi Jinping’s Belt and Road Initiative (BRI) into its constitution at the 19th National Congress in October. This move signaled the depth of the Chinese commitment to its massive infrastructure investment plan and ostensibly prompted last week’s quadrilateral meeting between senior officials from the United States, Japan, India, and Australia on the future of a “free and open Indo-Pacific.” India’s participation in the dialogue is yet another signal that China’s method of implementing the BRI is driving a wedge between these neighbors and creating an opportunity for the United States to strengthen its ties with New Delhi.

The unveiling of the BRI in 2013 signaled a new direction in Chinese foreign policy. The initiative harkens to antiquity when merchants followed the “Silk Road” to trade goods between Europe and Asia. The modern version is a China-led pan-Eurasian infrastructure development program designed to increase connectivity between China and its world markets. A successful initiative presents the People’s Republic of China (PRC) a significant opportunity to demonstrate leadership on the world stage and reap dividends in increased economic and diplomatic power. How the PRC chooses to use these instruments will affect its relationship with neighboring states—particularly a rising India.

An increase in tensions between these regional heavyweights is not an outcome China advertises for the BRI. The PRC promotes the initiative as “win-win” cooperation between states and enumerates its five goals of “policy coordination, facilities connectivity, unimpeded trade, financial integration, and people-to-people bonds.” Chinese funding, using vast PRC currency reserves, will help offset Asia’s substantial infrastructure needs which have been estimated at $1.7 trillion annually by the Asian Development Bank. Participating states will receive funding, primarily as loans from PRC controlled financial institutions, and China will gain improved connectivity to world markets. This arrangement could produce the mutual benefits that are the cornerstone of BRI branding.

A successful BRI could help the PRC tackle significant economic challenges. China has vast financial reserves it can invest into infrastructure and excess construction capacity that could weigh down the Chinese economy. Loaning other countries its excess reserve funds with the potential employment of its excess construction capacity in return is a “win-win” for China. Additionally, improving connectivity with its less developed neighbors could enable China to outsource low paying jobs and move up the value chain. This move up would be a key step in helping China avoid the “middle-income trap.” In this light, the BRI is a tool for the PRC to revitalize its economy while addressing both current and future economic pressures. If it can implement its vision for BRI and reap these rewards, China will emerge a stronger diplomatic and economic force on the world stage.

China will need its neighbors’ cooperation to reap those rewards; however, Beijing’s handling of territorial disputes in the era of BRI has increased tensions in the region. The BRI vision statement claims “Principles of Peaceful Coexistence” which include a “mutual respect for each other’s sovereignty.” Contrary to this principle, China has escalated sovereignty disputes by pressing territorial claims against its neighbors. In the South China Sea, China has challenged Vietnamese claims by moving a state-owned oil rig into disputed waters and constructed airstrips suitable for military aircraft on disputed features in the Spratly Islands. On the Doklam Plateau in 2017, China challenged Bhutan’s sovereignty by attempting to extend a road into disputed territory leading to a military standoff with India, Bhutan’s security guarantor. These actions directly contradict the BRI vision statement and send a signal to China’s neighbors that it will aggressively use its instruments of power to assert claims over disputed territories. Neighboring states are now forced to consider how China’s BRI investments may be leveraged to strengthen its position on competing territorial claims.

Tensions between China and India predate the introduction of the BRI. New Delhi and Beijing both claim land that India sees as part of Kashmir in its north and Arunachal Pradesh in its east. A Chinese invasion of Indian controlled territory in 1962 led to war between the Asian powers, but the territorial disputes remain unsettled. Unfortunately, the BRI is already increasing the pre-existing Sino-Indian tensions as indicated by India declining its invitation to the May 2017 Belt and Road Forum citing concerns over sovereignty, fiscal responsibility and transparency.

In addition to the previously highlighted territorial disputes, BRI investments are challenging India’s sovereignty claims in Kashmir. The PRC has sponsored development along the China-Pakistan Economic Corridor (CPEC) through territory in Kashmir that Pakistan controls and India claims. From the Indian perspective, China has abandoned its neutral stance on the dispute to side with Pakistan and has sponsored an initiative that violates Indian sovereignty. China’s failure to address Indian concerns was the initial cause of New Delhi’s reluctance to join the Belt and Road Initiative. China’s unilateral implementation of its vision for the BRI over Indian objections has increased bilateral tensions.

Adding to these tensions, India has concerns about Chinese intentions in the Indian Ocean and how BRI investments might affect the maritime balance of power. As part of its CPEC and Maritime Silk Road related investments, China has invested in port facilities in states surrounding India including Pakistan, Myanmar and Sri Lanka. Investment in these ports has given rise to the “string of pearls” theory which speculates that China will leverage these facilities for military use. When viewed on a map, these maritime investments represent the encirclement of India at sea. The docking of Chinese attack submarines at a Chinese-constructed port in Sri Lanka belies a militarization of these BRI-related investments in India’s island neighbor. Naval encirclement is a significant security concern as India depends upon sea transport for about 90 percent of its international trade.

India is also concerned about shifting regional security alignments because of Chinese investments in its land and sea neighbors. Indian Foreign Secretary Jaishankar commented on New Delhi’s concerns about the potential consequences of the BRI in March 2016:

The interactive dynamic between strategic interests and connectivity initiatives … is on particular display in our continent… [W]e cannot be impervious to the reality that others may see connectivity as an exercise in hardwiring that influences choices.

Indian commentators have expressed concern that smaller states will become overly dependent on Chinese loans and trapped in debt servitude to Beijing. A worrying example for these BRI critics occurred in July when Sri Lanka gave China control of the deep-water port of Hambantota in exchange for Chinese debt forgiveness. In this exchange, the PRC gained a potential “pearl” to add to its string. Interestingly, in recent months Sri Lanka has actually renewed ties with India due to concerns about undue Chinese influence stemming from its debt. If future trends align with the projections of BRI critics, the PRC could parlay economic investment into puppet states that encircle India on land and sea. Unfortunately, if other potential puppet states turn toward India instead, it could still result in increased tensions as Chinese debtors become more entangled with India.

In the shadow of an uncertain security architecture and heightened tensions resulting from BRI implementation, India has sought to increase security and economic cooperation with other powers, particularly the United States and Japan. To improve its security position, India signed a bilateral logistics exchange memorandum of agreement (LEMOA) with the United States in 2016 which granted reciprocal logistics access to military bases. With Japan, India has increased security cooperation by selecting Japan as a permanent participant in the traditionally U.S.-Indian Malabar security exercise in 2015. These actions signal an active effort by New Delhi to address its security deficits with China by keeping friendly military powers engaged in the region.

India has also sought to deepen its economic relationships with democratic regional powers to promote its own vision for connectivity development. Shortly after China’s Belt and Road Forum concluded in May, Indian Prime Minister Modi unveiled the Asia-Africa Growth Corridor (AAGC), a connectivity initiative conceived by India and Japan and seen as a potential counter to the BRI. In the wake of the 19th National Congress that consolidated Xi Jinping’s power and enshrined the BRI into the CCP’s constitution, Indian representatives attended last weekend’s quadrilateral dialogue that discussed both connectivity initiatives and security cooperation between the democratic powers. India’s pursuit of increased security and economic partnerships signals a reluctance from New Delhi to accept Chinese primacy in Asia and its initial efforts to counterbalance Beijing’s influence. If India chooses deepened cooperation with democratic powers in the wake of the initial “quad” meeting, it will be another sign of the ever-increasing tensions between New Delhi and Beijing due to the BRI. More troubling, the “quad” meeting portends a trend toward military and economic polarization in Asia.

The Case for Cooperation with China

An alternative to this environment of increased Sino-Indian tensions and regional polarization is one of increased bilateral cooperation and development. This scenario would be of mutual economic benefit and could build upon the two countries’ BRICS cooperation. For India, its infrastructure requirements are estimated at $1.5 trillion over the next decade. Belt and Road Initiative investments could provide a considerable source of funding for Indian development. For China, India presents a large target for its excess construction capacity. One commentator has gone as far as insisting that India is the only country capable of absorbing all China’s excess capacity. However, if China intends to pursue such an arrangement, its methods appear tone deaf. Chinese development along the CPEC despite Indian sovereignty concerns belies a unilateral dimension to BRI development that troubles Indian leadership. Secretary Jaishankar’s comments from 2015 reflect New Delhi’s views: