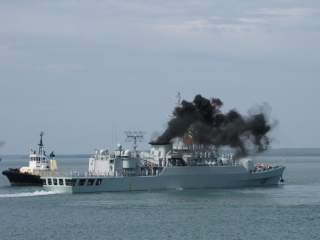 The recently concluded 15th Shangri-la Dialogue in Singapore once again focused on the South China Sea disputes. At the Dialogue, Admiral Sun Jianguo, Deputy Chief of the Joint Staff Department of China’s Central Military Commission, rebutted criticisms of China’s actions in the South China Sea and reiterated China’s legal right to ignore an upcoming judgement in a case filed by the Philippines at the Permanent Court of Arbitration at The Hague.

As many governments and analysts view ASEAN’s reaction to this upcoming judgement as a gauge of its unity, it is timely to evaluate if Chinese foreign minister Wang Yi’s announcement of a four point “consensus” reached with Brunei, Cambodia and Laos in late April this year – which contained supposed agreements between the four countries on approaches to manage the South China Sea disputes, approaches congenial to China’s view of the disputes – was really a common agreement by all parties. This uncertainty over the “consensus” was shared by ASEAN secretary-general Le Luong Minh. In a response to a question on 9 May in Singapore about it, he said that “we are not even aware of what was agreed with China and the three ASEAN countries…We’ve heard nothing from Laos and Brunei on what was agreed or what happened”.

As this “consensus” was only between three ASEAN countries and China, rather than between ASEAN as a whole and China, this would appear to indicate a split in ASEAN unity. It is therefore important to examine the three ASEAN countries’ respective perspectives of what happened during Minister Wang’s trip to their countries in order to assess if there was indeed a split in ASEAN unity.

Divergent Perspectives of the Bilateral Meetings

While it is clear that Minister Wang had met with leaders of Brunei, Cambodia and Laos in their respective countries in late April this year, there appears to be a divergence between their views and China’s perspective on what was really agreed upon in each bilateral meeting.

In their respective Foreign Ministry’s post-meeting statements, both Brunei and Laos avoided making any specific references to the South China Sea disputes and there was no mention of any agreement with China. As for Cambodia, its Foreign Ministry did not even issue a post-meeting statement regarding their bilateral meeting with China. Their government spokesman Phay Siphan did, however, confirm two days after China’s announcement that no deal had been reached with China: “There’s been no agreement or discussions, just a visit by a Chinese Foreign Minister.”

It is clear that China had gone to each of the three ASEAN countries with the intention to reach agreements with each of them over the South China Sea disputes. The choice of countries that Minister Wang visited – and the seven ASEAN countries that he did not visit – also provides some clues on China’s assessment of the countries which would not have a huge negative reaction to this China-declared “consensus.” Such a move can be seen as part of a broader strategy by China to project a split in ASEAN unity and garner support for its position in view of the upcoming judgement by the Permanent Court of Arbitration.

This “consensus” provides the impression that China had convened a meeting with all three ASEAN countries at the same time and had an agreement over their common approach in managing the South China Sea disputes. This is not true, especially since none of the statements issued by the Foreign Ministries of the three ASEAN countries had used the term “consensus” (or a term containing a similar meaning) with reference to the South China Sea disputes. The use of the word “consensus” therefore appears to be fully China’s unilateral idea. To China’s credit, their Foreign Ministry’s statement on the “consensus” did state that it was reached with the three countries “respectively,” though such a choice of words is still vague and does not clearly convey how the “consensus” came about.

The conclusion that can be drawn is that the three ASEAN countries may not have viewed the “consensus” in the same light that China seems to have viewed it.

Therefore, concerns over a fracture in ASEAN unity may not have been as deep-seated as media reports have made it out to be, and that Brunei, Cambodia and Laos may still view the common ASEAN position as far more important than any agreement they may have had with China. This, along with the insistence at the ASEAN Defense Ministers’ Meeting Plus in 2015 that the South China Sea disputes should not be included in the joint declaration, shows that ASEAN unity is still relatively intact. This bodes well for the contributions that Singapore can make as the country coordinator of ASEAN-China dialogue relations, as a relatively unified ASEAN is also a stronger ASEAN that can better engage China to discuss the management of the South China Sea disputes.

Looking ahead, ASEAN will nonetheless continue to face challenges. Singapore’s Defence Minister Ng Eng Hen said at the recent Shangri-la Dialogue that ASEAN’s assertion of its centrality is a “position attained by default.” All major powers have consistently recognised and accepted ASEAN centrality. The key challenge in the years ahead for ASEAN, however, is whether it can remain united in the face of the major shifts to the regional landscape, which is witnessing escalated great-power competition between the United States and China. A divided ASEAN is not in the interests of the ten Southeast Asian states, nor of the major powers. Only a united ASEAN can make positive and long-lasting contributions to the international affairs of the twenty-first century.