China's Bullying of Hong Kong Could Get Ugly 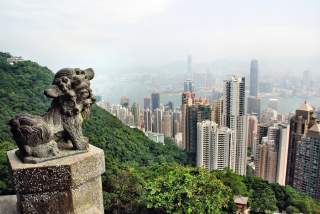 When Chinese president Xi Jinping presides over July 1 ceremonies marking the twentieth anniversary of Hong Kong’s return to mainland sovereignty, some ten thousand security personnel will be on duty to protect him from any public protest he might perceive to be as dangerous or embarrassing. But there will be no one on duty to protect Hong Kong from Xi Jinping.

That’s because the government and ruling Communist Party that Xi heads have clearly run out of patience with the obstreperous Hong Kong’s continued demands for greater political autonomy. Now, China is tightening the controls. They consider many of Hong Kong’s political activists to be ungrateful agitators who neither appreciate the special favors the city has been granted, nor are properly respectful of Beijing authorities and the powers they hold. This feeling has intensified since 2015, when Hong Kong’s complex—and sometimes dysfunctional—political system rejected the mainland’s offer of a highly conditional form of universal suffrage for choosing its chief executive, or local government leader.

Thus, Beijing has called a halt to the political reform that was supposed to someday allow Hong Kong voters to freely choose their own leaders and run local affairs with the “high degree of autonomy” promised when the Union Jack came down and the flag of the People’s Republic took its place in 1997. Beijing has made clear that there will be no significant political liberalization for at least five years, if ever, no matter what local citizens may want. (Public-opinion polls consistently show that most residents favor a more democratic system.) Moreover, there are worrisome signs that already existing civil freedoms may be curtailed after the newly chosen chief executive, Carrie Lam, assumes office July 1. President Xi is expected to make that explicit in remarks at the ceremony.

In fact, other Beijing officials and their Hong Kong enablers already have set the tone, including a threat to revise the city’s Basic Law—the de facto constitution that outlines the “One Country, Two Systems” policy that governs the city. It is supposed to allow Hong Kong to have local control of political and economic systems substantially different from mainland China until at least 2047, while making clear that those systems belong to the same nation. This puts at risk the British common-law legal system, crucial to its commerce and role as an international finance center. The bluntest warning to date has come from Zhang Dejiang, China’s number-three official who serves as chairman of the National People’s Congress. Zhang is a member of the Politburo’s standing committee and is directly responsible for Hong Kong policy. His basic message is: Beijing is boss, and don’t forget it.

“The relationship between the central government and Hong Kong is one of granting powers, not of sharing powers; the prerogatives of [Beijing] can never be opposed in the name of the ‘high degree of autonomy’ [because] the central government has comprehensive jurisdiction,” he stated in a recent Beijing speech. Moreover, he said Hong Kong does not have—even though its citizens have long believed otherwise—a true “separation of powers” among legislative, judicial and executive branches. “It is an executive-led government with the Chief Executive at its ‘core,’” a term both China and North Korea often call their top leaders. This makes both judges and legislators subordinate to the senior government executive.

He went even further. New laws should strengthen young people’s “national condition education and rule of law education,” while other laws to define Beijing’s “right to give orders to the Chief Executive” and review (and overrule) Hong Kong court decisions, among other things, should be “established and refined,” Zhang stated.

If Beijing proceeds with these changes, its local allies will include most of Hong Kong’s influential business leaders. These capitalists are in a de facto alliance with Communists to thwart local democracy for two main reasons. First, they’re much more interested in profits than in promoting individual rights, so they go along with whatever Beijing proposes. Essentially, they mainly want to “fat choi” (get rich), according to the complaint of one Hong Kong magazine editor. Second, they don’t want a populist government that might greatly expand social spending and raise taxes.

All this promises trouble on several fronts. For one thing, past efforts to introduce “patriotic education” classes in local schools—presumably to extol mainland policies —have brought noisy protests from both students and parents, forcing the Hong Kong government to back down. Even so, the party’s youth wing now says it soon will “help” young students “shape their identity with the culture of the motherland and the correct knowledge of One Country, Two Systems.” This reflects the center’s effort to combat a leading worry about Hong Kong—a growing sense of “localism.” Increasingly, residents, especially the young, consider themselves Hong Kongers first, ethnically Chinese second and citizens of the People’s Republic of China a distinct third. This has even spawned a small Hong Kong independence movement, an impossible dream that Beijing finds useful when justifying new political restrictions.

Beijing also demands that its Hong Kong abettors pass new security legislation to control “sedition and treason,” plus other political crimes. But many Hong Kong legal experts fear these will be defined in such vague terms that almost anything officials dislike can be termed illegal, curtailing civic freedoms Hong Kong people now enjoy and want to keep. (This would parallel similar mainland moves during President Xi’s rule, such as a pending new intelligence law.) In Hong Kong, a 2003 effort to pass security laws brought five hundred thousand protesters onto the streets and the government retreated. But now Beijing spokesmen insist new laws must be adopted soon despite local opposition. Lam, who has deep roots in the Hong Kong society, has seemed reluctant about this, for she understands the depth of local opposition. Any effort to pass new security laws could spark massive protests. But it’s not likely she can resist if pressure mounts.

Some pro-Beijing sources also say the legal system needs other revision. For example, they complain that Hong Kong’s highest court has too many foreign judges (a majority in fact), recruited from countries where the common law system prevails. And legal scholars also worry that Beijing, to protect its own financial interests, may weaken the commercial law that underpins the Hong Kong economy as a global business center. For example, it has intervened twice to declare immunity for defendants—a foreign government it aided and a state-owned company—from civil damage suits. This threatens Hong Kong’s long-term goal of keeping politics apart from commercial law. A London law firm has warned that “where a counterparty is a foreign state or the PRC government, the Hong Kong courts may not be the best forum for any potential dispute.”

There are other signs of a political squeeze. Nine leaders of the 2014 Occupy Central protests against Beijing’s proposed election rules now face—after a long delay—serious criminal charges, including “conspiracy to cause public nuisance”; it’s believed Beijing officials want them prosecuted as an example to others. In a clear violation of the “one country, two systems” policy, mainland police have entered Hong Kong to seize book publishers who committed no crime on the mainland. They also illegally grabbed a Chinese billionaire who had been living large in a Four Seasons hotel suite, perhaps as part of an anticorruption case. The response of Hong Kong authorities ranged from tepid to silent. But they have sealed off a plaza in front of the main government offices, often the site of peaceful protests, for “security reasons.” And some newly elected members of the Legislative Council have been denied their seats for deliberately mangling the official oath of office, and refused a second chance to take it.

As the U.S. State Department noted cautiously this month, “actions by the Central Government appear to be inconsistent with its stated commitments to Hong Kong’s high degree of autonomy.”

All this is not what Hong Kong expected twenty years ago when Deng Xiaoping’s “one country, two systems” plan took effect. Nor is it what Beijing apparently anticipated. For one thing, the policy was meant to entice Taiwan into a similar arrangement and thus rejoin the mainland. It was also meant to ensure Hong Kong’s prosperity, still important to China itself, and even offer lessons for the mainland’s own future political development.

For example, a dozen years ago Wang Zhenmin, then vice dean (and later dean) of the law school at Beijing’s prestigious Tsinghua University, and already an adviser on Hong Kong policy, wrote that “full democracy is good for Hong Kong. To maintain long-term stability and prosperity, it is important that full democracy be introduced. . . . World history has proven that modernization usually goes hand in hand with democracy. . . . It is necessary to further liberalize the people politically and economically.” Further, he said the city could be an example for the mainland because “China itself needs to develop democracy.”

That was then. Now Wang is the influential legal specialist at Beijing’s official liaison office in Hong Kong that monitors (and meddles in) local affairs, so his message has changed. “Political reform has failed,” he asserts, and Hong Kong should drop the subject for “the next five to 10 years.” If activists continue to use local autonomy to confront Beijing, the center could scrap the existing system, he has warned. And if that happens, “Hong Kong will lose its insides, its everything.” Moreover, he said, pro-democracy politicians should stop criticizing Chinese policies and instead “revere” the country.