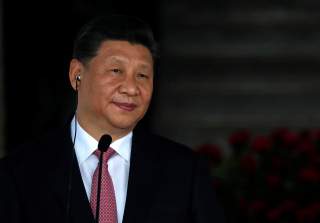 In 2017, Islamic insurgents in Niger ambushed and killed a four-man U.S. Special Forces team. It was front-page news and considered a catastrophe.

That same year more than twenty-eight thousand Americans died of overdoses involving the synthetic drug, fentanyl. Yet, it seemed less of an attention-getter in Washington—and still does—even as the death toll rises.

Most of the fentanyl comes from the People’s Republic of China—although this point is usually under-reported or ignored by the media.

The Washington Post recently published an op-ed written by China expert John Pomfret explaining why the Chinese government does not stop the fentanyl flow—despite its recent promises to the U.S. government. Perhaps as the result of heavy editing, the article reads like an uncritical listing of PRC talking points. The average person might look at it and think that Beijing can either do nothing about fentanyl flow or is justified in doing nothing owing to Western mistreatment of China in the nineteenth century—or perhaps due to America’s failure to extradite Chinese citizens sought by the PRC.

A couple of sentences in the op-ed note that the CCP can stop the fentanyl flow anytime it wants, and that there is no excuse for what China is doing, might have been left on the copy room floor.

Pomfret correctly notes that China’s local governments won’t stop fentanyl production; they want tax revenues and employment—and are also thoroughly corrupt. True enough. But local officials are also scared to get caught doing something that crosses Beijing. Thus, CCP leadership presumably doesn’t object to what they are doing. Additionally, Pomfret notes that the PRC government is in a legal bind as fentanyl producers keep jiggering the formula to avoid the “illegal list”—and therefore the producers are always one-step ahead of the government that can’t revise the laws fast enough.

Pomfret does state in his op-ed that the PRC could simply ban all fentanyl-related products—regardless of composition. That’s true, but also irrelevant. In China, the law is what Xi Jinping and the Communist Party say it is. If they want to close down fentanyl producers, then the “law” is no obstacle—as it would be in the United States. The fact that the PRC doesn’t ban fentanyl “of any chemical composition”—much less go after producers—once again suggests the CCP is glad America is awash in fentanyl.

We are told that Chinese cops have a different approach to policing. That may be true—but it also makes it easier for them to go after drugs, if that is what the CCP desires. The PRC police can do whatever they want. They can “disappear” people and arrest starlets. They can kidnap billionaires and booksellers without fear of repercussion. The only restraints come from Zhongnanhai.

As for arguments that Chinese authorities can’t find the illegal drug producers: the CCP is creating a surveillance state that even Orwell couldn’t have imagined. Deface a poster of President Xi and you will soon be collared and imprisoned or in a mental hospital.

Indeed, before long, just whisper in your bathroom that Xi resembles Winnie the Pooh and you’ll have Ministry of State Security agents at your front door in a few minutes.

Next, PRC officials argue that it’s the Americans are to blame for their drug problem and need to stop taking drugs. Pimps and drug pushers have been using this excuse for years; they claim that they are “just giving customers what they want.”

Human nature is what it is. But that’s why civilized societies punish the providers of dangerous substances, weapons, and unsafe products and services—and not just sanction users for their irresponsible behavior.

Pomfret’s op-ed also mentions that Chinese authorities are angry (and implicitly excused) because the United States won’t return every Chinese fugitive that Beijing demands. Yet, extradition disputes between countries are nothing new. And even China refuses to return a key figure in the 1MDB scandal who is hiding under protection in the PRC.

Taking a few Canadians hostage is bad enough but using an extradition dispute to excuse a scheme killing thousands of people every year beggars the imagination.

Finally, Pomfret suggests in his op-ed that China’s blind eye to fentanyl exports is simply payback for the Opium Wars. Pomfret specifically uses the word “schadenfraude.” However, schadenfraude is chuckling over the distress New York Yankees fans feel when their team loses in the playoff and misses the World Series—again.

China’s behavior is better characterized as blood-soaked revenge. Instead of schadenfraude it more resembles an arsonist gloating while watching the fire trucks and ambulances heading to his latest fire. And it is causing carnage—throughout all parts of American society—even in “good” neighborhoods. About half of the deaths attributed to fentanyl are of men and women who are old enough to serve in the military. As one observer notes, this is the equivalent of removing a couple divisions of Army or Marines. And don’t forget the “battlefield casualties” who survive but can’t function as productive members of society, and the burden and expense of caring for them.

Some claim fentanyl victims are just “druggies” and wouldn’t have joined the military anyway. That is not a solid argument. Young people have been misbehaving for centuries, and that includes many who join the U.S. military. But a “six pack” or a “joint” is one thing, a concoction that kills or permanently disables a person is quite another.

In the end, a person can only conclude the PRC government is incompetent or corrupt. Perhaps it is pushing fentanyl on purpose and making a large profit. Maybe all of this is true. Regardless, while the U.S. southern border gets the attention, America is losing almost as many citizens to PRC-supplied drugs than it did during the worst years of the Vietnam War—and far more than the number of citizens killed in all eighteen years of war in Iraq and Afghanistan.

Thus, this is my advice for President Donald Trump. Consider holding off on Xi Jinping’s invitation to Mar-a-Lago. Instead, do one or more of the following:

Suspend the People’s Bank of China BOC from the U.S. dollar system;

Pull the plug on ZTE, the Chinese telecom firm that is on probation;

De-list Alibaba from the New York Stock Exchange (it shouldn’t have been listed in the first place);

Revoke the “green cards” and place liens on the properties and bank accounts of the relatives to the top five hundred CCP members—specifically those who live in the United States.

Beijing will stop pushing drugs into America; it just needs a reason to do so.

It’s past time we gave it one.

Grant Newsham is a retired U.S. Marine Officer and a senior research fellow at the Japan Forum for Strategic Studies.