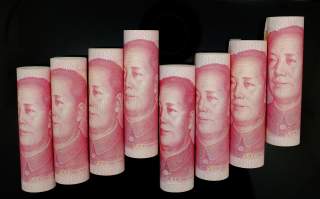 On Friday, China Minsheng Investment Group announced that its subsidiary, Boom Up Investments, will not make principal or interest payments on August 2 on $500 million of three-year, dollar-denominated bonds.

The default will be the first for the firm’s dollar-bond creditors. CMIG, as the former high-flyer investment conglomerate is known, failed to make payments on renminbi-denominated obligations in January.

CMIG’s Friday announcement, although not a surprise, is nonetheless significant. As Bloomberg News reported, the firm was once thought to become “China’s answer” to American giant JPMorgan Chase.

The troubles of CMIG mirror problems at other companies and follow the shock failure of Baoshang Bank, which the government took over last month.

Bond defaults are rocking China. This year, they will almost certainly top those in 2018, which itself set a record. The failures suggest, among other things, that the Chinese economy is in severe distress.

At first glance, companies should have no trouble paying creditors. Gross domestic product, according to China’s official National Bureau of Statistics, grew 6.3 percent in the first half of the year. In high-growth environments, companies don’t often go belly-up. In China, however, there’s an epidemic of defaults.

The defaults, of course, suggest that China is not—in reality—growing anywhere near the pace that Beijing has been reporting.

For example, look at last year. NBS, as the statistical agency is called, said the economy expanded 6.6 percent in 2018. That’s unlikely. Xiang Songzuo of Beijing’s Renmin University created a sensation across China in December when in a speech he said China’s 2018 growth would come in at 1.67 percent or perhaps even be negative.

Indicators for last year support Xiang’s gloomy assessment. Moreover, the economy now looks like it is shrinking. June, for instance, was awful. Both official and unofficial purchasing managers’ indexes showed the crucial manufacturing sector in contraction; bellwether car sales, according to the China Association of Automobile Manufacturers, were down 9.6 percent, the twelfth straight month of decline; and imports, a closely watched measure of domestic demand, fell 7.3 percent.

China’s actual growth rate, a matter of endless debate, is not the real story, however. There are two narratives to follow. The first is debt. Beijing has essentially forced state enterprises to take on obligations to keep the economy growing.

Even if one believes Beijing’s exaggerated growth numbers, then earlier this year the country was creating five-and-a-half times more debt than nominal GDP. That’s up from one-and-a-half times about a year ago.

Debt creation, until recently, was out of control. According to conservative estimates, the country has three times as much debt as reported gross domestic product, 303 percent in the first quarter of this year according to the Institute of International Finance.

The second big narrative is that China cannot grow its way out of its debt problem. The economic history of this year is divided into three parts. There were the weak months of January and February, a smallish recovery in March, and the downturn of April, May, and June.

There is a lesson in the one-month uptick: stimulus is no longer working well. “China is unlikely to rely on excessive fiscal and monetary stimulus this year, due to its already loose monetary policy and high levels of debt created by previous fiscal stimulus policies,” Sara Hsu, the CEO of China Rising Capital Forecast, told the National Interest. “These policies have become less available to Chinese technocrats due to previous overreliance on such options.”

Anne Stevenson-Yang of Beijing-based J Capital Research agrees. “The Chinese government will not flood with monetary stimulus,” she told me. “For example, a further rate cut is unlikely, as are a bunch of new pledged supplementary lendings and other sneaky monetary instruments.”

You can say that again. The term for excessive Chinese monetary stimulus is “flood irrigation,” and there is a need for the phrase. In China last year, M2, the broad gauge of money, was 202.9 percent of reported GDP. In comparison, America’s M2 last year was only 69.2 percent of GDP.

No wonder monetary stimulus has been ineffective this year.

Now, China has to rein in debt, and reining in debt has scary consequences. Large businesses are used to essentially free money but now, because of debt concerns, they are not getting what they need to pay off creditors. “Tight monetary policy means defaults—no two ways about it—and defaults at a gargantuan scale,” Stevenson-Yang said. “So there will be rollovers and debt forgiveness until the scale becomes too big to manage.”

Beijing so far has been able to avoid a crisis, defying predictions of financial crisis. Yet by resorting to piling on the debt in the past to avoid a reckoning, technocrats have made the debt situation now too big to solve.

Technocrats, at this point, have run out of options. There is only one way out for them: create GDP faster than debt. That is not something they have been able to do in years, however.

If the defaults are at all significant, which they appear to be, then it is a signal that China’s economic managers are losing control.