China's Defense Budget: What Everyone Is Missing 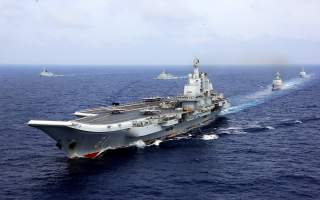 The recent session of China’s National People’s Congress approved an increase of China’s defense budget by 8.1 percent, which translates into an annual spending of $175 billion for the People’s Liberation Army (PLA) for 2018. Chinese analysts state that the increase keeps pace with China’s annual economic growth rate of 6.9 percent for 2017, and that unlike before 2016 when defense budget had gained mostly double-digit growth since the early 1990s, it has slowed down to single-digit growth for the past three consecutive years. They also point out that China’s defense budget as a percentage of growth domestic product (GDP) and of total government spending and in terms of per capita spending on defense remains low compared with other major powers. China’s 2018 defense budget, for instance, constitutes only about 1.4 percent of its annual GDP if compared with the United States’ 3.4 percent and Russia’s 2.8 percent. China’s budget is also only one quarter of the United States’ budget. As a result, they argue that this year’s budget increase would benefit China’s military modernization moderately. When such an argument is reasonable, there are several other reasons that suggest that the budget increase may be more significant than it appears to be.

First, because of substantial growth for more than three decades, the base of China’s defense outlays has expanded to the extent single-digit growth today may generate monetary figures that are much larger than those generated by double-digit growth in the past. This year’s increase of about $25 billion, for instance, is already higher than China’s total defense spending for 2003, which was $23 billion. As a result, PLA analysts’ argument that a defense spending increase is largely an effort to pay off the “old debt” attributable to Deng Xiaoping’s policy for “the army to be patient” (“军队要忍耐”) by keeping defense budget low in the 1980s, may become much less persuasive.

Moreover, the ongoing counter-corruption drive in the PLA, together with more independent and authoritative supervision by discipline inspection and auditing agencies, should produce deterrence effects that contribute to substantial waste reduction and more efficient use of defense spending for military tasks.

Also, the recent restructuring and downsizing of the PLA by 300,000 billets, with an eye on cutting non-combat agencies, units and personnel, and stricter supervision on authorized strength of various PLA organizations, should lead to more optimal use of defense spending for combat tasks by a smaller military.

Furthermore, the relatively successful civilian governance by party and government leadership, with an emphasis on continued economic growth, along with political and social stability, has denied the PLA a major reason to get involved in domestic politics and power struggle. Consistent with Xi Jinping’s call on the PLA to make preparations for fighting and winning wars, this development allows the PLA to focus narrowly on perfecting its functional and technical expertise, which also contributes to more optimal use of defense spending on military tasks.

Moreover, even though the cost of doing business in China has risen, it is still lower than in the United States, even in terms of the cost of acquiring comparable technologies. China’s fifth generation combat aircraft, the J-20, for instance, costs $110 million apiece. In comparison, its U.S. counterpart the F-22 costs $150 million per aircraft. China’s defense budget covers the costs of acquiring and upgrading weapons systems, training and exercises, and manpower. Because a substantial proportion of such costs is not related to high technologies, the purchasing power of China’s defense budget is likely to be much higher than that of the U.S. defense budget.

Regarding extra-budgetary income, with implementation of Xi’s policy for “PLA to completely stop compensated services and activities” (“军队全面停止有偿服务活动”), the PLA would lose the revenue from its business activities. But because such activities have corrosive effects on the PLA such as military corruption, military-societal tension, tension among various PLA units, neglect of combat readiness and erosion of civilian control, the PLA’s complete divestiture from business activities should contribute to enhancement of its combat effectiveness.

On the other hand, Xi’s emphasis on a policy of civil-military integration should generate new non-budgetary investment in China’s science, technology and industrial sector, in infrastructure development, in higher education and in social safety nets that should translate into benefits for improving the combat effectiveness of the PLA.

Finally, even though China’s defense budget is only one quarter of the United States’s budget, unlike the global orientation of the U.S. military, the PLA’s primary objectives are regional. PLA posture also stresses defense and deterrence, even though the perimeter has expanded from China’s continent to its “near seas.” This limited orientation also helps to optimize the use of defense budget.