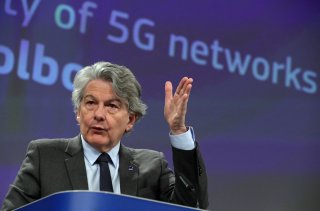 Two months ago, Chinese telecom giant Huawei was on the offensive. Downing Street had authorized the company to build out portions of the country’s 5G networks over strong objections from Washington. Reports indicated that Germany and France were poised to offer similar terms to Huawei as well, giving the company a strategic foothold in key European telecommunication markets.

Today, however, Britain and the world are in turmoil as governments grapple with the global coronavirus pandemic and international perceptions about China changing dramatically. So, too, are their views of the country’s most formidable tech conglomerate.

According to London’s Daily Mail, the British government is furious at the People’s Republic of China (PRC) and its self-interested response to the coronavirus. The UK’s frustration, which is shared by policymakers in the United States, centers on Chinese Communist Party (CCP) propaganda that has deflected blame for the origins of the coronavirus onto the United States while falsely claiming that the PRC’s response to the coronavirus bought time for the rest of the world. Health experts have also reportedly briefed Downing Street that the CCP is downplaying its coronavirus cases “by a factor of 15 to 40 times.”

But senior British officials have reserved their harshest criticism for Huawei. According to an unnamed senior cabinet minister, “We can't stand by and allow the Chinese state's desire for secrecy to ruin the world's economy and then come back like nothing has happened.” The minister went further: “We're allowing companies like Huawei not just into our economy, but to be a crucial part of our infrastructure.”

To wit, there are indications that Prime Minister Boris Johnson, recently hospitalized with the coronavirus, is now under pressure from cabinet ministers to reevaluate his Huawei decision. If the Daily Mail’s reporting is correct, then this perception shift within No. 10 could signal dimming prospects for Huawei within the UK.

Such a shift would be welcome news on a number of fronts. Huawei’s equipment poses a serious threat to global security because it could provide China with a window into the operation of Western governments and militaries. Secretary of Defense Mark Esper alluded to this in congressional testimony last month when he warned that Huawei’s presence in the networks of North Atlantic Treaty Organization (NATO) allies could “have a severe impact” on the bloc’s ability “to conduct itself as an alliance.”

The facts underpinning Esper’s warning are chilling. According to 2018 figures from the Department of Defense (DoD), the U.S. military maintains 259 military sites throughout thirteen European countries. In a crisis scenario, NATO’s top priority would be joint mobilization, the process of rapidly deploying manpower and firepower to hotspots. Although the DoD transmits classified information over protected networks, logistics functions like personnel data and deployment force lists often travel over unclassified channels. By the department’s own admission, these civilian networks are a prime target for adversaries to intercept data and sabotage operations—a task made easier for any adversarial nation that has surveillance equipment pre-positioned in commercial telecommunication networks.

As the Wall Street Journal notes, the U.S. government believes that the PRC possesses this capability through Huawei, which can monitor data passing through its telecommunications hardware. That makes Britain’s January decision to grant Huawei a limited role in its 5G networks a potentially dangerous move. The Australian government, for instance, has made clear that “no combination of technical security controls” can mitigate this risk.

This warning from Canberra matters because both Australia and the UK, along with the United States, Canada, and New Zealand, are in the Five Eyes (FVEY) intelligence-sharing network, a community of intelligence agencies that shares highly sensitive signals intelligence on space tracking, early warning indicators, and ballistic missile defense kill chain, among other things. Because this cooperation is premised on implicit trust, any vulnerability in one nation can jeopardize the larger intelligence-sharing program. And Huawei equipment in telecommunications networks within Britain would introduce political risk that could complicate FVEY relationships.

Just two months ago, none of these concerns were persuasive enough to prompt London to ditch Huawei. But shared threats often become clearer in the light of a transnational crisis. The coronavirus pandemic has revealed the Chinese Communist Party cannot be trusted to tell the truth or value the lives of people over its own power monopoly. This political callousness represents a potential threat to any nation doing business with Beijing—one that British officials would do well to take to heart. They would do even better to use the opportunity to rethink their government’s partnership with Huawei.