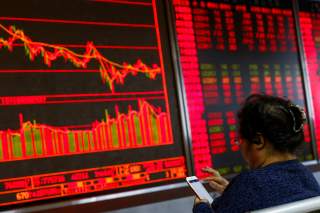 Hit by a trade war and a slumping global economy, China is desperately attempting to avert a slowdown in the world’s second-biggest economy. Against all the odds, can Beijing pull it off?

On December 21, China’s leadership signed off on an economic roadmap for 2019 that features aggressive stimulus measures, including tax cuts and monetary easing.

Yet Beijing’s top officials are not optimistic. The statement released at the end of the three-day economic conference noted that “the external environment is complicated and severe, and the economy faces downward pressure.”

The policymakers called for a “proactive fiscal policy” including tax cuts, exceeding the around 1.3 trillion yuan ($188 billion) already authorized for this year. They also urged a “prudent” monetary policy that is “neither too tight nor too loose,” suggesting a softer stance from the central bank.

China’s efforts to rein in escalating debt levels may also be wound back slightly, with the policymakers committing to a “relatively substantial increase” in local government bonds.

Notably, for the Trump administration, the statement asserted that China has “properly dealt with the Sino-U.S. economic and trade frictions.”

“It is necessary to implement the consensus reached by the heads of state of China and the United States in Argentina to advance bilateral economic and trade negotiations,” it said in reference to the ninety-day moratorium on further tariff hikes agreed by U.S. President Donald Trump and Chinese President Xi Jinping during their December 1 meeting.

However, while the policymakers stated that “market access should be eased” and the intellectual property rights of foreign firms in China respected, they gave no indication Beijing would abandon its “Made in China 2025” initiative aimed at seizing global leadership in a number of key high-tech industries.

But while Beijing looks to a brighter future, the short-term appears increasingly cloudy.

Official gross domestic product (GDP) data showed the economy slowing for the second straight quarter in the September quarter, cooling to 6.5 percent from 6.7 percent in the prior quarter, marking its slowest expansion since the global financial crisis.

“While it’s easy to blame the trade tussle with the U.S. for this, the deceleration so far is mostly domestic driven, with infrastructure spending contracting and car sales coming off the boil.”

The only bright spot has been construction activity, long a favorite of policymakers given its responsiveness to increased credit.

China’s stock market has tanked in 2018, losing around 22 percent over the past year, while the Chinese yuan has dropped nearly 6 percent.

Capital Economics expects next year to be even tougher though, particularly for a communist-ruled regime that bases its legitimacy on economic success.

“China’s economic slowdown looks set to deepen next year, weighing on equity prices and the renminbi. Policy stimulus should put a floor beneath growth before the year is out, but won’t drive a strong recovery,” the London-based consultancy said in a December 17 report.

Capital Economics expects official GDP to cool from 6.9 percent in 2017 to 6.6 percent in 2018. However, its in-house measure of the Chinese economy points to an even sharper contraction, from around 5.5 percent currently to just 4 percent next year.

The consultancy’s senior China economist, Julian Evans-Pritchard, suggests that the housing sector will cool, while export growth will come under increased pressure “even if a further escalation in tariffs is avoided.”

Even with policy stimulus, Capital Economics sees growth slowing until at least mid-2019, leading to further weakness in China’s stock market and currency.

Longer term, the consultancy argues that China’s state-led capitalism will see its growth rate slow to just 2 percent by 2030, due to Xi’s decision to “double down” on government intervention rather than allowing scope for greater market forces.

Other forecasters also point to a slowdown. The International Monetary Fund (IMF) expects China’s GDP growth to weaken from 6.9 percent in 2017 to 6.6 percent this year and 6.2 percent in 2019, putting it well behind fast-rising India’s projected 7.4 percent growth.

In its latest staff report, the Washington-based organization pointed to “tensions in the authorities’ strategy between, on the one hand, the stated goals of stabilizing leverage, allowing market forces a decisive role, and greater innovation and opening-up, and, on the other, still-unsustainable debt growth, the pervasive role of the state in the economy, and the relatively restrictive trade and investment regime.”

Elsewhere, the OECD sees China slowing from 6.6 percent GDP growth this year to 6.3 percent in 2019 and just 6 percent in 2020, amid a weakening world economy.

“Global economic growth remains strong, but has passed its recent peak,” the Paris-based organization said in its latest growth forecasts in which it further cut its projections.

ANZ Research also tips a cooling in China, from an estimated 6.6 percent GDP gain this year to 6.3 percent in 2019, along with a rising current account deficit and renewed deflation risks.

Meanwhile, China’s debt to GDP level could reach 275 percent by the end of 2019, up from 261 percent in 2018, according to the Bank for International Settlements.

Any escalation of the U.S.-China trade war could further damage China’s exports, with ANZ Research estimating that $517 billion worth of U.S. tariffs imposed on Chinese goods could trim China’s GDP by 0.5 percent.

The recent arrest in Canada of Meng Wanzhou, chief financial officer of Chinese telecommunications giant Huawei, and resulting response by Beijing suggests that a near-term détente between the world’s two biggest economies is unlikely.

Trump’s trade advisor, Peter Navarro told Japan’s Nikkei it would be “difficult” for a deal to be done within the ninety-day ceasefire, saying “half-measures” would be unacceptable on issues such as China’s forced technology transfers, cyber spying, state-directed investment and other barriers.

“China is basically trying to steal the future of Japan, the U.S. and Europe, by going after our technology,” he said.

For China, it all adds up to an increasingly difficult outlook for Asia’s Year of the Earth Pig, a zodiac sign known for financial fortune. With trouble at home and abroad, Beijing will need plenty of good luck.