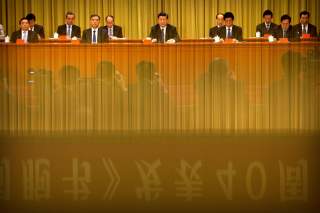 Right after New Year’s Day, Peking University Professor Zheng Yefu made a daring call for the ruling Communist Party to “step down gracefully from the historical stage.” His appeal echoed an earlier petition for political reform by one hundred influential Chinese intellectuals, who demanded democracy and the rule of law. Both online manifestoes were censored immediately by the Chinese authorities, who just celebrated forty years of reform and opening-up to the world in mid-December. These sequential occurrences attracted widespread attention on China’s social reality after four decades of reform, President Xi Jinping’s domestic policy, and the possibility of political reform.

The groundbreaking policies initiated by senior leader Deng Xiaoping in 1978 catapulted China into becoming the second-largest economy today with global reach. But since assuming power in 2013, President Xi reversed Deng’s reforms, forbidding discussions of “political reform,” halting the separation of party and the judiciary system, and abolishing his constitutional term limit. His focus is simple: to keep the Party’s absolute rule. When marking the anniversary of those 1978 reforms in mid-December Xi reiterated that “The Party leads everything,” triggering the hundred intellectuals’ outcry.

Despite President Xi’s emphasis on the uniqueness of Chinese society in defense of the Party’s absolute rule, China is not exceptional from the axiom “absolute power corrupts absolutely.” In fact, Chinese officials didn’t inherently corrupt the government, but rather the absolutist government corrupted them. Even through Chinese history, the dynastic cycle shows that no absolute rule can escape its downfall brought on by becoming corrupt with its own absolute power. A millennium dynasty is just a dream. Only the rule of law and democracy based on power-checking can keep the government away from its doomed demise.

Ironically, President Xi’s actions are nothing new but a repeat of history in which the ruler terminating reform ultimately threatens his own throne. A recent example was the reform named the Self-Strengthening Movement (yang wu yun dong, 1861–1895) in the late Qing dynasty, a three-decade-long effort to emulate world powers by introducing Western technologies and weaponry. The Qing rulers solely approved of economic reforms and forbade political changes to extend their absolute rule. Contrary to their hopes, however, the lack of political reform paved the way for the collapse of the Qing dynasty.

China is now experiencing social maladies typical in both developing and developed countries, and is coming to the historical juncture of economic, political, and social transformation. But various factors indicate that the reform launched in 1978 will not, and cannot, result in another Self-Strengthening Movement. In other words, political reform is inevitable.

First, early last year, Xi supporters threatened to eliminate the whole private sector, which contributes more than 60 percent of China’s GDP growth, attempting to return to the state-monopolized economy. Though President Xi had to rebut the idea and reassure government support for private businesses, the repercussions of this noise and the scathing U.S. trade war caused the dramatic decline of China’s economic growth in late 2018. This drama revealed the paradox facing Xi and his supporters: that stopping the wheel of economy is suicidal, but keeping a robust private sector disables them from restoring the untouchable absolute rule of Mao’s time.

Second, Chinese society currently suffers from fragile stability without order, where populism and extreme nationalist fervor is brewing. Given the long egalitarian tradition of hatred for the rich, people’s wishes for affordable housing and equal educational opportunities are vulnerable enough to be exploited by demagogues. Thus, China needs the genuine rule of law urgently.

Third, over the past four decades, China and its people have been entwined with the outside world materially and spiritually. Besides China’s economic reliance on foreign trade, in the year 2017 alone, some 130 million Chinese have traveled abroad. Returning to seclusion is impossible.

Fourth, since 1978, China’s economy has gone through revolutionary changes, making its obsolescent political system not only awkwardly unfitting but also stoking public distrust of government. Without political freedom, China can only exist as a giant with feet of clay, possessing the largest commercial market but the smallest thought market, which consequently hampers its national creativity.

According to the World Bank, China’s per capita nominal GDP reached $8,827.0 U.S. dollars in 2017, and the World Bank will likely list it as a high-income economy in 2021–2023, meaning China is mature enough for democratic transformation or political reform. Meanwhile, the petitioning Chinese scholars are offering a peaceful solution to end the dynastic cycle, as each past dynasty was buried along with great havoc to the society. The intellectuals’ voices might be weak but as British historian R. H. Tawney noted, in China political forces liken river pressure on the dykes, “enormous, but unseen; it is only when they burst that the strain is realised.”

This year China will see several historically significant anniversaries: the centennial day of the May Fourth Movement, thirty years since the June Fourth Tiananmen crackdown of 1989, and the seventieth birthday of the People’s Republic on October 1. While it is uncertain whether the inevitable public cries for political reform during these occasions will make authorities considering a change of course, it is certain that the current political austerity cannot halt China’s historical development forever. Ultimately, the healthy forces that represent China’s true interests will put the country on the right track, as the good-willed scholars are urging.

Yun Tang is a commentator and historian based in Washington. He can be reached at [email protected].