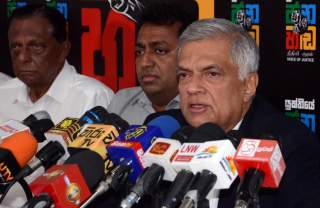 In 2015, when Sri Lanka received relatively rare mention in discussions of world politics, then-President Mahinda Rajapaksa suffered a shock election loss. At the time, I outlined lessons that rising powers like China could learn when developing insights into smaller countries like Sri Lanka, including an appreciation of their own reputations. Observation of recent events in Sri Lanka—prime ministers replaced, parliament dissolved, and new elections called—underpinned by the ongoing public popularity of Rajapaksa, suggest that now it is time for China's geopolitical competitors, the United States and India, to reflect if they are to compete.

While China continued expanding its economic relations with Sri Lanka under the traditionally pro-Western Wickramasinghe, it is apparent that Beijing has greater alignment with the geopolitical outlook of Rajapaksa—whose government the West and the United Nations have repeatedly criticized over human rights and civil liberties violations, including conduct during Sri Lanka’s long civil war.

Though China’s ambassador had also met with Wickramasinghe and Beijing had publicly stated that constitutional questions are an internal matter for Sri Lanka, issuing such congratulations to Rajapaska was a bold move by Beijing, one suggesting a level of confidence regarding its image within Sri Lanka. Given the importance of the Sri Lankan-Chinese relationship and the sensitive current situation, it is unlikely Rajapaksa would have misrepresented China’s position in his tweet.

Proximity to China Is No Sackable Offense in Sri Lanka

Sri Lanka’s recent upheaval, particularly the calling of early elections, would have been impossible without Rajapaksa’s ongoing popularity amongst the majority Sinhalese population—as seen in his group’s positive showing in local elections last February. This popularity is rooted in ending the civil war, which he achieved via military force rather than political negotiation. Despite all the negative coverage of Chinese activity in Sri Lanka during Rajapaksa’s rule, his popularity has remained largely intact.

It seems that despite concerns regarding high-interest loans, many Sri Lankans do not see Rajapaksa's alleged proximity to Beijing as a sackable offense. Contrast this to the ousted Prime Minister Wickramasinghe, who developed a reputation for acquiescing to U.S. and European demands during and after Sri Lanka's conflict—and that reputation has cost him electorally over the years.

Corruption, a key factor in Rajapaksa losing power in 2015, has now become associated with the Wickramasinghe government as well—effectively neutralizing it as a differentiator amongst swing Sinhalese voters. Wickramasinghe’s United National Party (UNP) needs these voters to complement their urban and ethnic minority base to win the proposed January 2019 election. With corruption viewed as ubiquitous, the UNP will likely emphasize threats to civil liberties and democracy in its campaign strategy.

I wrote in 2015 that rising powers needed to sharpen their abilities in both insight and influence when pursuing their interests with smaller states. China, India, and the United States have all been accused of interfering in Sri Lanka during both the 2015 election and the recent turmoil. While these countries have denied it, what is likely is that China’s new-found confidence in its image is based in an increasing insight into Sri Lankan politics, an insight that helps Beijing capitalize on the current situation.

In particular, Beijing’s strategists may have come to appreciate the lingering trauma of the three-decade civil war in the minds of Sri Lankans of all ethnic groups. They may have realized that while allegations of Chinese “debt traps” and corrupt deals are commentators’ central focus, for the public, these remain concerns of second order. Any danger from China is a less emotive shaper of Sri Lankan public perception. Moreover, China’s ownership of Sri Lankan land and assets via equity swaps is often described as a threat to sovereignty—but mention this term, and you may remind Sinhalese voters of their recent civil war in which sovereignty faced arguably more immediate threats.

The American and European positions during the war were viewed by large parts of the population as, at best, acquiescent to the separatist cause, and at worst, pursuing a clandestine divide-and-conquer agenda. In contrast, Beijing is seen as, at best, a much-needed great power ally that helped end the war and countervail Indian regional dominance, and at worst, a transactional partner who extracted payment for military support with high-interest loans for unprofitable projects. For instance, there have been protests against Chinese projects—including those led by Rajapaksa himself when those initiatives were being implemented under Wickramasinghe. However, the negative sentiment was not as intense as, for instance, that created by the perception of Norwegian support for the Tamil Tigers.

Lessons for the United States and Europe

Some have argued that to compete with China, the United States and Europe must put up the cash concerning aid and investment. Such steps are helpful but costly and politically unpalatable to domestic American and European populations that feel neglected and resentful of their governments spending money overseas.

But economic efforts can be complemented, by another avenue for competing with Beijing that is cheap, electorally popular in the United States, and stays true to the platform President Trump ran on. This is non-interventionism. A clear reaffirmation to refrain from involvement in foreign conflicts and political matters that have little relevance to the security and economic interests of the majority of Americans would slowly improve Washington's reputation in Sri Lanka. Non-interventionism would also make a pro-Western political position an easier sell for Sri Lankan politicians. Accordingly, Washington and Brussels could make a greater portion of their human rights criticisms via discreet diplomatic channels rather than publicly. Genuine human rights advocacy would then be less likely tarnished by suspicions of a hidden agenda—suspicions which have also damaged the reputation of Western non-governmental organizations.

American and European policymakers must adequately appreciate the legacy of their positions during Sri Lanka’s war. The lingering perception of the West’s interference in sovereign states, whether accurate or not, acts as a handicap when competing with Beijing in the public diplomacy arena.

Indian policymakers too can learn lessons from events in Sri Lanka. Like with the United States, some options to compete with China are expensive and unrealistic. Delhi cannot compete in the investment arena with China’s economic strength—often used to back up Beijing’s state-owned corporations. India had been offered deals like the Hambantota port but rejected them since Delhi could not afford to incur short-term economic losses in the hope of long-term strategic gains as Beijing can.

Furthermore, one thing India has more control over is its foreign policy toward neighbors. Significant numbers of both Sinhalese and Tamils view New Delhi with suspicion due to India’s legacy in their civil war. In the conflict’s early stages, Indira Gandhi’s India saw an interest in nurturing the Tamil Tigers because Delhi and Colombo were in opposing camps during the Cold War. Later on, successive ruling parties in Delhi sacrificed India’s national interest in a positive relationship with Sri Lanka in favor of domestic political interests by maintaining support from Tamil Nadu state politicians. In the last decade, however, Delhi has taken a more pragmatic approach—highlighted in its cautious, measured reaction to the current crisis. The current Bharatiya Janata Party (BJP) government’s ability to rule without a coalition has helped underpin this.

As the great game of the Indo-Pacific gathers momentum, major powers and rising powers must engage in continuous learning to compete. Part of this means understanding the politics and psyches of the peoples of the countries in which they pursue their interests. This involves noting one’s past positions and the collective memories these have etched into the minds of those populations. As Mahinda Rajapaksa’s re-ascendance demonstrates, and as China seems to have realized, in Sri Lanka no single issue defines “allies” and “opponents,” “friends” and “enemies” as the legacy of Asia’s longest civil war.

Kadira Pethiyagoda is a nonresident fellow in Asia-Middle East Relations at the Brookings Doha Centre. Follow him on Twitter at (@KPethiyagoda).