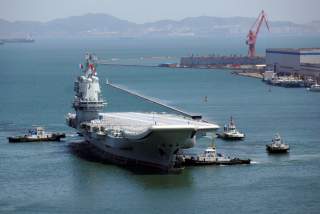 The well-worn formulation that “amateurs study tactics, while professionals study logistics” has significant explanatory power when considering the rapidly changing balance of power in the western Pacific. This derives from the single, unalterable fact that Beijing will operate on interior lines in almost any scenario in that theater, while Washington will operate on exterior lines in such a conflict. Thus, the People’s Liberation Army (PLA) will not only bring more initial firepower to any fight, but perhaps more importantly, can sustain that immense volume of firepower. “Blue” forces, by contrast, will be operating at the end of very long and likely tenuous supply lines for an extended period.

During the Korean War, initial Chinese offensives were quite successful, but the PLA eventually outran its supply lines and proved unable to dislodge UN forces from the peninsula, resulting in the stalemate on the 38th parallel. In that conflict, PLA logistics supply was relentlessly pounded by U.S. airpower and Chinese forces at the front suffered accordingly. That original “trial by fire” made a deep impression upon the PLA regarding the importance of military logistics. Today, there is every reason to believe that China could move forces forward surreptitiously and effectively, not only to provide a stunning initial blow, but also to maintain PLA combat power. A window into the PLA’s current thinking on logistics preparation is provided by a recent article (2017, no. 4) in the Chinese military journal Military Economic Research [军事经济研究] written by two professors from China National Defense University [国防大学].

The article is a case study of British logistics mobility in the Falklands War or, as Chinese term the conflict, the Malvinas War (马岛战争). As I have written elsewhere, Chinese strategists have studied all aspects of the Falklands War, including especially aerial, undersea, and amphibious dimensions. Special emphasis is placed in this article on the rapid mobilization, size, and efficiency of the merchant armada that was assembled to accompany the Royal Navy’s expeditionary force. The Chinese article notes that the sixty-seven merchant vessels sent with the British Fleet were about equal to the number of warships dispatched and comprised just over double the tonnage. The Chinese strategists are impressed that the “large quantity of mobility assets” [运输力量多] could be organized so quickly, beginning just two days after the war began. Rapid upgrades [建设快] of these merchant ships included adding helicopter landing pads, equipment for at-sea resupply, as well as modernized communications and rescue equipment. Average time for these upgrades is reported by these Chinese analysts to have been just seventy-two hours. Three hundred different private enterprises, they explain, were involved in this crucial work.

The Chinese marvel over almost all aspects of the meticulous preparations undertaken by the British, down to the impressively elaborate meal services. They attribute part of the successful logistical planning to the early application of computer modeling [电子计算机模拟]. Another reason for Britain’s success in this respect is attributed to preparations that had been undertaken for both “unexpected events,” [突然事件] as well as “military planning [for a hypothetical] European war.” The authors explain that London had drawn up plans in 1978 to assemble a merchant armada of three hundred vessels to support NATO planning requirements.  Moreover, the British military exercises of its logistics system are evaluated here to have been “rigorous” [军事训练严格].

Indeed, this Chinese military analysis puts a premium on the quality of British logistics personnel, both in terms of training and also motivation. Logistics personnel in the British system at that time were drawn strictly from retirees and volunteers, according to this article. Not only were such personnel expected to drill in military exercises thirty-one days out of the year, but merchant vessels were often brought in for exercises with fleet units. The analysis goes into significant detail in discussing the various pay benefits and subsidies accorded to these personnel, who were not active duty military, but were nonetheless participating in military drills or operations. There is, moreover, a discussion of a system that could mobilize logistics personnel for twelve-hour, twenty-four-hour and three-day requirements. In general, the need to form an efficient system to respond to a “National Defense Ministry emergency dispatch” [国防部急件] is emphasized.

While similar types of reforms appear to have been underway for some time in China, the four recommendations elucidated in this piece should be noted. First, the authors call for enhanced integration of civil and military elements within logistics planning. They criticize the current level of integration in this area as “insufficient, either neglecting military requirements or the relationship to market economics.” They urge a “transformation in thought concepts” [推进思想观念转变] in this respect. The authors additionally call for a more systematic Chinese approach to military logistics. In their view, that will entail “greater specificity and increased quantification-type requirements [细化量化类要求].” A third set of proposals focuses narrowly on the time factor and calls for the implementation of the most modern information tools to assist with rapid mobilization. Such tools must go beyond radio and television, to include the internet and “we chat” as a platform to permit the “the fastest transmission of national orders.” The final point is to step up Chinese exercises of reserve forces in respect to “missions . . . time . . . content . . . [and] quality.” The authors urge logistics forces to “lash up” [捆绑] with active forces in a way that resembles the British model from the Falklands.

In the western Pacific, China has the inevitable strategic advantage that it is located proximate to any hypothetical conflict along its maritime flanks. This fundamental fact of strategy cannot be wished away or unraveled by some new technology. As the PLA further strengthens its proficiency at logistics support, that aptitude will enable Beijing the option of considering long-range power projection akin to the Falklands War, especially against a weaker opponent. Yet closer to China, these same impressive capabilities will allow China to establish military dominance in proximate areas. Those seeking to “ramp up” the American military commitment in these areas, from the South China Sea to Taiwan to the East China Sea to the Korean Peninsula, had better keep the mundane, yet ultimately decisive logistics issue close in mind and consequently exercise necessary and responsible caution.

Lyle J. Goldstein is research professor in the China Maritime Studies Institute (CMSI) at the United States Naval War College in Newport, RI. In addition to Chinese, he also speaks Russian and he is also an affiliate of the new Russia Maritime Studies Institute (RMSI) at Naval War College. You can reach him at [email protected]. The opinions in his columns are entirely his own and do not reflect the official assessments of the U.S. Navy or any other agency of the U.S. government.