China's Mighty Missile Threat: What Should America Do about It? 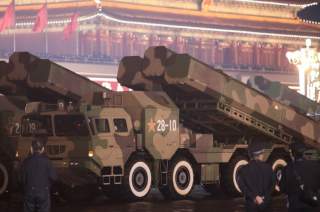 China’s land-based ballistic and cruise missiles are a serious threat to the ability of the United States and its allies to operate in the western Pacific. The terms of the Intermediate Nuclear Forces (INF) Treaty ban the United States and Russia from deploying similar systems. However, the suggestion that the United States seek to abrogate or modify the treaty in order to develop land-based intermediate range missiles ignores asymmetries in strategic geography that make ground-based intermediate range ballistic missiles (IRBMs) and ground-launched cruise missiles (GLCMs) unsuitable weapons for the U.S. in its competition with China. Furthermore, despite claims that IRBMs would be the “cheapest and most straightforward method of maintaining deterrence,” they would fail to exploit comparative U.S. military advantages that impose greater costs in the strategic competition between China and the United States. Rather than embark upon the acquisition of a new class of missiles – a technically complex acquisition effort that is unlikely to be either cheap or straightforward – the U.S. should make additional investments into submarine-launched missiles and long-range strike systems.

The geography of the Asia-Pacific provides few suitable options for the forward deployment of U.S. missiles. New U.S. weapons with ranges similar to those of the Pershing II ballistic missile or the cruise missiles that the U.S. gave up in the INF would have to be deployed on allied territory within the First Island Chain. Even a new weapon at the 5500-kilometer maximum range of the INF would only open up a small number of new base areas including Guam and the northern reaches of Australia. Most of the suitable locations already host U.S. military facilities and all are within range of China’s own missile systems. Fixed missile bases on Okinawa, Guam, or in Japan would be just as vulnerable to Chinese attack as current U.S. airbases in the region. Further concentrating U.S. military power in vulnerable forward bases would do more to incentivize a Chinese first strike against U.S. forces during a crisis than it would to enhance U.S. deterrent or strike capabilities.

Mobile missiles are unlikely to be the solution to the vulnerability of U.S. forward bases as small islands are not suited for mobile operations. Okinawa and Guam are too small and crowded to offer dispersed operating areas for an operationally relevant number of mobile missiles. The human and physical geography of both the Japanese home islands and the Philippines would also constrain the availability of dispersal areas. Even if sufficient dispersal areas could be found, mobile missiles still require fixed sustainment infrastructure, which China would likely target in the opening stages of a conflict. While a single salvo may have been sufficient for the intermediate-range nuclear forces the U.S. deployed before the INF, conventional missiles would likely need to provide sustained striking power in order to justify the costs of developing and deploying a new missile system.

Instead of deepening the vulnerability to Chinese missile attack by deploying additional forward forces, the United States should focus on its long-standing comparative advantages and make additional investments in submarine launched missiles and long-range strike capabilities. These forces would not necessitate modification or abrogation of the INF and would present a number of strategic advantages to the United States. Forward operating U.S. submarines would not be vulnerable to missile attack and long-range strike aircraft could operate from bases well outside the range of all but the longest-range Chinese missiles.

The U.S. could enhance the striking power of its current forces by investing in improved long-range standoff weapons. Extended range air- and submarine-launched cruise missiles could strike targets deep within China, not just in the coastal provinces. Longer-range air-launched missiles would keep non-stealthy bombers like the B-52 militarily relevant, extend the useful lifetime of stealth aircraft in the face of increasing counterstealth threats, and could even allow the U.S.to invest in cheaper, non-stealthy aircraft to meet future needs. While surface ships carrying longer-range cruise missiles would be more vulnerable to attack than submarines, they would be more mobile than missiles confined to small island bases.

These systems also impose costs on China. Submarine launched missiles could force China to develop expensive anti-submarine warfare capabilities as well as invest in defenses against the missiles themselves. Both of these capabilities are complex and expensive and take a long time to develop the systems, tactics, and skills to accomplish. Both submarine and air-launched missiles could also launch from a far larger area of the Western Pacific than missiles confined to small island bases, forcing China to deploy sensors against a larger number of threat azimuths and to deploy forces to conduct anti-submarine patrols over large expanses of the Pacific.

INF-class weapons offer few political benefits to the United States. A U.S.-initiated abrogation or modification of the INF could undermine the ability of the United States to make arms control or non-proliferation gains in other areas of the globe. Should it be necessary to deploy land-based missiles to allied territory, which seems unlikely as the U.S. already deploys significant forces to protect allies in Asia, shorter-range anti-ship missiles that would not violate the INF would be a less expensive and potentially more useful alternative. A recent RAND study concludes that 200-nautical mile range missiles deployed in the First Island Chain in Japan, the Philippines, and Indonesia would be sufficient to prevent PLAN forces from breaking out into the wider Indo-Pacific.

Changes to the INF are not necessary to influence Russian behavior simply because Russia already pays little heed to the strictures of the treaty. Russia is likely to deploy the first RS-26 missiles, which are essentially IRBMs that comply with the letter but not the spirit of the INF, to Irkutsk, possibly to threaten China.  While modifying the INF would allow Russia to avoid the additional costs of acquiring missiles that are technically ICBMs to perform intermediate range missions, the benefits of widening this loophole are likely to be marginal.

The illusory benefits of deploying intermediate range weapons in the Western Pacific should not figure into U.S. decision making about the future of the INF treaty. IRBMs or GLCMs would do little to enhance U.S. striking power or deterrent capabilities in the region due to their vulnerability to attack and failure to impose strategic costs on China. Concerns that the United States has made insufficient investments into bombers and submarines should be addressed directly by making greater investments into bombers and submarines and into weapons that will ensure the effectiveness of legacy platforms and not by modifying treaties to allow for acquiring new, costly, and vulnerable weapons systems.

Matthew Hallex is a strategic analyst at the Scitor Corporation. His opinions are his own and do not represent those of their employer or clients.