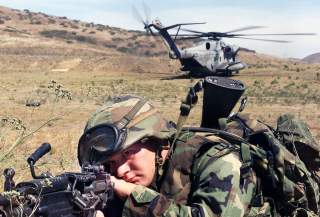 Over the past year, tensions on the Korean Peninsula have risen to unprecedented levels. Though the threat of war has been present at other times in the past, recent missile and nuclear-weapon tests, escalating threats and counter-threats, and declarations that all options are on the table have made the possibility of war on the Korean Peninsula more plausible than it had been for years. The winter Olympic Games and the opening it has created for inter-Korean dialogue and possible talks between Washington and Pyongyang have provided a respite. However, the fundamental problem of North Korean denuclearization remains and tensions are likely to return.

As the possibility of military conflict increased during fall 2017, countries began planning for the possible need to evacuate its citizens should fighting appear imminent. Seoul and other major cities in South Korea are cosmopolitan centers with over two million foreign residents that may require evacuation. In November 2017, the Japanese government announced plans to evacuate its nationals from South Korea should fighting erupt. The United States has similar plans for what the military calls “noncombatant evacuation operations” or NEOs.

The country that has the most at stake for a civilian evacuation is China, which has the most citizens living in South Korea as foreign nationals. Should a conflict breakout, China would be in a difficult position, given its ties with the North and the large number of its citizens residing in the South. Initiating an NEO is an ominous indicator, signaling the likelihood of hostilities and a move that could possibly be misunderstood by those involved and heighten the chances of catastrophe. For all states, implementing an NEO in Korea would be an incredibly difficult and complex task. Over the past decade, Beijing has acquired the necessary assets and experience to conduct NEOs and would not rely on others to rescue its citizens. Given this likelihood, it will be essential for the United States, Japan, South Korea, and others to coordinate their actions with China to ensure success and avoid getting in each other’s way.

After decades of Cold War enmity, in 1992, China and South Korea established formal diplomatic relations and ties between the two countries grew. Through business, education, and tourism, the number of South Koreans living in China grew as did the number of Chinese nationals living in and traveling to South Korea.

On June 21, 2017, the Korean Immigration Service published its annual report on immigration noting that more than one million Chinese nationals were living in South Korea in 2016. This total represents almost half of all foreign residents in South Korea and is seven times more than the number of U.S. residents and twenty times more than the Japanese residents living south of the demilitarized zone. Thus, China faces a serious challenge to evacuate its citizens to safety. China also has residents on the northern side of the peninsula but the exact number is unclear. However, the numbers are likely to be far lower than those living in the South since North Korea limits the presence of foreigners in its country.

Over the past decade, Chinese economic growth has allowed for a significant expansion of the People’s Liberation Army Navy (PLAN) and many civilian assets that provide a robust capability for overseas evacuation operations. Chinese capabilities are some of the best in the world, not only in quantity but also in the skill and experience of Chinese operators. As a result, China has the ability to execute successful evacuation operations on short notice for large groups of people. There are three key areas where China has improved its evacuation capabilities.

First, the Chinese military has greatly expanded its available assets that could be used for an NEO. The PLAN has the best amphibious and transportation capabilities of anyone in the region. For example, China has built four Type-071 Landing Platform Dock (LDP) ships, the Yuzhao class, and used one of these ships, the Jinggan Shan to transport Chinese Marines to Djibouti, China’s first overseas base. In addition, the PLAN has thirty-two Landing Ship, Tanks (LST), nine new fast combat-support ships, and the hospital ship, known as the Peace Ark, which could be used in evacuation operations. In addition, the PLA air force has purchased twenty Il-76 airlifters and built the Xian Y-20 strategic air-transport plane along with other tactical-lift aircraft.

Second, China has many civilian assets that could be utilized in addition to military capabilities. These include hundreds of civilian airliners and merchant ships that provide additional transport capacity. Through the National Defense Mobilization Law, the National Defense Transportation Law and other regulations, the Chinese government can commandeer civilian shipping companies and airliners such as COSCO Shipping, China Merchants, Air China, and China Eastern Airlines to form a civilian-military combined transportation network controlled by the Central Military Commission. For example, the National Defense Transportation Law requires Chinese civilian shipbuilders to ensure that new ships can be used by the military during an emergency for strategic power projection and maritime support actions. In order to build and strengthen their proficiency, these assets exercise regularly with PLA forces and can be mobilized by the government on short notice.

For a Korea crisis, civilian aircraft along with cargo and passenger ships would operate between China and South Korea from ports in Yantai and Shandong, China, and the port in Pyeongtaek, South Korea. For Chinese airline pilots, landing at Incheon and Busan are regular destinations and the captains of Chinese merchant ships are very familiar with the ROK ports of Pyeongtaek and Busan. These ports are major naval bases for the South Korean navy, so the facilities will be capable of handling an evacuation operation. However, these facilities could easily be overwhelmed by the volume of traffic both for NEOs and for combat operations should fighting erupt.

Finally, a deteriorating security situation in Korea and a subsequent NEO is likely to involve China’s maritime militia. To deal with the maritime insecurity that will accompany a Korean conflict, the Chinese Coast Guard, coastal defense units, and the Maritime Militia will be mobilized for security and safety operations, including blockades, sweeping the sea routes, disarming any ships and personnel, immigration control, and medical support for ships and people fleeing the conflict. In the Yellow Sea and Bohai Gulf coastal areas, China has sufficient space to temporarily accommodate a large number of people—both Chinese citizens and citizens from other countries.

Over the past few years, China has had two experiences conducting NEOs, first in Libya in 2011 and a second in Yemen in 2015. Chinese leaders and the PLA gained experience and learned valuable lessons in each of these operations. The evacuation operation in Libya was the first and largest overseas contingency operation since the People’s Republic of China began in 1949. The Chinese government sent numerous civil and military assets to the Mediterranean, including ninety-one civilian airliners, thirty-five chartered foreign airliners, twelve PLA Air Force transport planes, five state-owned merchant ships, eleven chartered foreign ships, and one PLAN frigate. In only twelve days, China evacuated 35,860 Chinese citizens along with 2,100 other people from twelve countries. Following the evacuation, Chinese leaders realized that they were lacking important capabilities for these types of operations and accelerated construction of more transportation and power-projection assets.

The second evacuation from Yemen was the first under President Xi Jinping’s leadership. Xi sent two PLAN frigates and a fast combat support ship to successfully evacuate 629 Chinese along with 279 citizens from fifteen other countries. After completion of the Yemen operation, Chinese foreign minister Wang Yi said China is “on the same boat” as the rest of the world and “with an able and helpful China the world will have more resources to maneuver through disasters and crises.”

China celebrated the success of the Yemen evacuation in several ways. In October 2017, China held its 19th National Congress of the Communist Party. During the deliberations, Chinese officials praised the operation as one of the most noteworthy achievements of Xi’s first year in office. The Chinese government also sponsored the making of a film named “Operation Red Sea.” The storyline of the movie is loosely based on the Yemen evacuation and is a combat-action movie that includes close-quarter combat and urban warfare by PLA Marine Special Forces. The film served as a gift to the military for the ninetieth anniversary of its founding and was shown at the 19th Party Congress. The film is also touted as China’s first modern naval film.

The experience gained by the PLA in past operations and the expanded naval and air capabilities have made China more confident and proficient in its ability to carry out NEOs. Initiating an NEO is a menacing signal of impending conflict. States will not initiate such a measure lightly. Moreover, in the midst of a crisis on the Korean Peninsula, conducting an NEO is going to be extremely difficult, no matter the level of confidence or capability. Will South Korea grant permission for the access China needs to conduct an NEO? How will Chinese operations complicate the NEOs of the United States, Japan, and others who will be attempting similar operations? Will North Korea attempt to impede NEO operations? NEOs on the Korean Peninsula will be challenging in the best of circumstances. If multiple states are conducting NEOs simultaneously needing to use the same roads, port facilities and airfields, possibly under combat conditions, chaos will reign.