China's New Challenge: How to Win the Soft-Power War 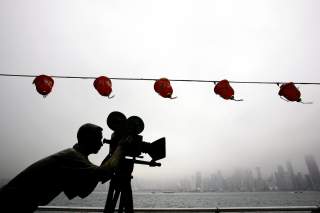 I taught at a Moroccan university in the spring of 2013, a period of time that happened to coincide with the apex of popularity of the Korean rapper Psy. On Friday afternoons, after the prayer had let out of the campus mosque, students would sometimes blare music on the central quad to celebrate the beginning of the weekend. The song they chose was always “Gangnam Style.”

My students often came to my office to discuss their plans to study abroad. Inevitably, the two most popular destinations were the United States and France. But the third choice surprised me: a remarkable number of my students hoped to spend a year in South Korea. Many of them, it turned out, liked to watch Korean television shows in their dormitories. And the university had recently concluded an agreement for a bilateral exchange program with Hannam University in Daejeon, which had simplified the process.

Whenever students would gush about their dreams of living in South Korea, I would ask if they had considered going to China instead. None of them had considered that option. I mentioned that a town in rural Morocco—not far from the university—was the home of an ophthalmologist who had studied medicine in China. This revelation was not the least bit enticing. China, I quickly realized, was seen as a place where one might be able to learn practical skills such as ophthalmology, but this prospect did not resonate with my undergraduates.

For a long time, the Chinese government put little initiative into enhancing its reputation. Even after then-president Hu Jintao publicly pledged in 2007 to build Chinese soft power around the world, those efforts were primarily directed at promoting either China’s media presence or its technological prowess rather than earning cultural cachet. The Chinese government’s January 2016 white paper outlining its policy toward the Arab world continued this trend; it promised to collaborate in scientific and technological research, but established no specific goals for cultural exchange.

Ever since Beijing first established relations with Arab countries in the 1950s, its go-to strategy for displaying Chinese culture has been to send acrobatic troupes to perform in the Middle East. The first such tour caused a stir in 1955 in Cairo, where tickets supposedly sold out within five minutes of going on sale, but the acrobatics have changed little in the past six decades. More recently, when organizations linked to the Chinese government have funded cultural events in the Middle East, such as a Chinese New Year celebration in Cairo in January 2017, they have supplemented acrobatic performances with demonstrations of Chinese calligraphy. The idea seems to be to highlight China’s traditional art forms, thereby promoting China as the heir to a grand tradition of civilization stretching back to ancient times. Such a strategy has clear limitations. The acrobats give awe-inspiring performances, to be sure, but they can hardly compete with the likes of Psy for the allegiance of the youth.

But all that may be starting to change. In the past few months, there have been signs that China is belatedly focusing on promoting more current cultural accomplishments—including the occasional bit of fun. Perhaps the most notable development has been a deal, accompanied by considerable fanfare in the Chinese press, to bring several Chinese television shows and movies to one of Morocco’s leading television channels. The first such program, a forty-episode series titled “We Love You, Mr. Jin,” was announced in April, though the premiere date has not yet been set. The head of the Chinese Communist Party Central Committee Propaganda Department paid a visit to Casablanca to finalize the arrangement.

“We Love You, Mr. Jin,” which is set in contemporary Beijing, is a comic drama about an educated young couple whose parents do not approve of their relationship. With a catchy theme song and characters clad in the latest fashions, it offers an appealing window into modern life in urban China. It is not the sort of heavy-handed attempt to encapsulate five thousand years of culture that one has come to expect from Chinese cultural outreach. It could be, in other words, a worthy rival to the Korean romantic dramas that have proliferated on streaming services around the world.

Curiously, “We Love You, Mr. Jin” has become one of the Chinese government’s standard options for introducing new audiences to Chinese television. In 2013, the program became the first Chinese series dubbed by Burmese actors to air on Myanmar’s state television channel. That same year, the Arabic version made its debut on Egyptian television. Another similar romantic drama, “Beautiful Era of a Daughter-in-Law,” has also been tapped for export. It became the first Chinese drama dubbed into Swahili in 2011, and in 2014 it was the second Chinese drama to air in Egypt.

What makes the new television deal with Morocco especially intriguing is that it has been explicitly framed from the outset as just the first of a long series of Chinese content that will make it onto Moroccan television. Next up will be four Chinese films: the Arabic dubbings of Go Lala Go! and Out of Inferno, as well as the French versions of 101 Proposals and the Jackie Chan action flick CZ12. This combination of romantic comedies and action movies seems likely to translate well into other languages and cultures.

The new willingness of the Chinese government to promote a wider variety of representations of Chinese society in the Middle East extends to more highbrow art as well. In April 2017, China was the guest of honor at the Abu Dhabi International Book Fair, an arrangement that reciprocated China’s invitation for the United Arab Emirates to be the guest of honor at the Beijing International Book Fair in 2015. The nearly seven-thousand-square-foot Chinese pavilion was lavishly appointed with a 6,500-foot-long rice-paper scroll illustrating the history of Chinese painting as the centerpiece. Among the books on display at the pavilion were three hundred titles translated from Chinese into Arabic. Many of those were from the rapidly growing catalog of the Ningxia-based House of Wisdom publishing house, which employs a team of fifty-one Sinologists from Arab countries to translate Chinese books into Arabic.

The Chinese government has long been leery of literature, fearing its potential to challenge the foundations of its rule. Indeed, as one might expect, Chinese state media gave the most consistent coverage to publications that would be unlikely to cause offense, including biographies of billionaire businessmen such as Baidu cofounder Robin Li and Alibaba Group founder Jack Ma. Similarly, the book fair was the backdrop for the release of an Arabic-language edition of The Character of China, a book by a Chinese professor that purports to explain five thousand years of China’s moral, intellectual and artistic development.

Chinese media reports paid far less attention to the appearances at the festival of some of China’s greatest living novelists, though it was their participation that suggests a new level of sophistication in China’s cultural outreach in the Middle East. Five prize-winning authors—Yu Hua, Cao Wenxuan, Liu Zhenyun, Mai Jia and Xu Zechen—all held events in Abu Dhabi during the book fair. The Chinese government has generally supported the work of all five writers, but each has tussled with the realities of state censorship, and each has presented far more nuanced visions of Chinese society than the standard propaganda designed for Arab audiences. Mai has written spy thrillers that probe the psychological impact of serving the state. Xu’s protagonists tend to be down-and-out characters struggling in a changing society, and he has spoken openly in interviews about his decision to stop writing about the Tiananmen Square protests of 1989 in order to ensure his books could find publishers. Yu’s best-known novel, To Live, was set partly during the Cultural Revolution; the film adaptation by Zhang Yimou is famous for having been entirely banned from China. Yu has even written provocatively about censorship in China and continues to advocate frank discussion of sensitive topics.

The choice of five thoughtful authors offering complicated takes on modern life to represent Chinese literature in the Arab world could prove to be an astute plan. In the past, China has been limited by its insistence on using government ventures to promote art abroad. In 2013, Joseph Nye, the originator of the concept of soft power, chastised the Chinese government for relying solely on state-sponsored programs to expand China’s cultural influence. China, Nye wrote, was making “the mistake of thinking that government is the main instrument of soft power,” rather than recognizing that more lasting influence comes from civil society. Nye’s comments caused a firestorm in China, leading to some defensive denunciations of him in the state media, yet it now appears that Chinese leaders may be taking his criticism to heart.

That certainly is not to say that the government has entirely abandoned the business of cultural promotion. A self-congratulatory January 2016 article in China Daily about the successes of Chinese programming in Egypt contains an alarming proposition: a call by a professor at Cairo University for the appointment of a joint Chinese-Egyptian committee to decide which Chinese films and television series most deserve to be dubbed into Arabic. Could such a committee ever be trusted to predict the tastes of Egyptian audiences? China has created a situation where certain works by private citizens are selected by the government to be exported as part of international deals negotiated by the government. It remains to be seen whether such an arrangement creates enough distance between culture and the state for China to command the international attention it covets.