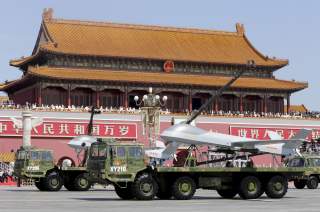 A spate of very serious accidents for the U.S. Navy in the Western Pacific has brought forth new procedures for American warships operating in the crowded sea lanes of East Asia. In a sharp break with the past, U.S. Navy ships are now operating with AIS transponders in active mode, at least in high traffic areas. These transponders are mandatory for merchant vessels crisscrossing the world’s oceans and are a major aid to preventing navigation accidents, but navies have resisted this trend for the obvious reason of safeguarding stealth and operational security. The now regular release of data on locations of U.S. Navy ships has occasioned some logical concern, but USN leadership has decided that the safety benefits outweigh any added risks.

That is likely a wise decision. However, the question of what potential adversaries know about U.S. military force dispositions in the Western Pacific is highly significant and actually has considerable bearing on the Asia-Pacific military balance. Indeed, one of the key variables in evaluating the so-called “anti-access” military strategy of certain major strategic competitors concerns whether the hypothetical opponent has sufficient intelligence, surveillance and reconnaissance (ISR) capabilities to put long-range weapons onto American military targets, especially when these are ships out at sea. The Chinese PLA has accumulated very substantial firepower in recent years, including lethal missiles like YJ-18, and a wide array of launch platforms, such as H-6K bombers and Yuan-class submarines. Then, there is the much discussed anti-ship ballistic missile, which was unveiled in the 2015 official Chinese military parade. Even with such a store of weaponry, however, more than a few Western strategists have voiced doubts regarding China’s ability to actually find and target American ships during a conflict.

For that reason, a high priority for strategists looking at the Asia-Pacific military balance now focuses on China’s developing ISR capabilities, especially the ability to locate targets at sea beyond the “first island chain.” We recently highlighted the advent of the world’s largest seaplane into China’s maritime surveillance arsenal. Yet, a plausible case can be made that the most potent of China’s future ISR assets will be unmanned systems.

One system has occasioned much discussion both in China and among Western strategists as of late: the Rainbow (彩虹) unmanned aerial vehicle (UAV). A recent article in the Chinese naval magazine Modern Ships (现代舰船 ) explored the issue of whether this new UAV could target U.S. aircraft carrier battle groups and this issue of Dragon Eye will summarize that piece, which notably keys off a report that was earlier circulated by the National Interest during the summer of 2017.

Hinting at the remarkable qualities of this UAV, the subhead of this Chinese article notes that the Rainbow UAV could fly continuously for months and “even for years” (甚至数年). Giving full credit to the original innovators in the United States, this article notes that NASA flew its first solar-powered UAVs during the early 1980s. A number of Chinese aerospace laboratories apparently took up the project in the 1990s and the Eleventh Design Bureau of the China Aerospace Science and Technology Corporation apparently created the Rainbow UAV. Powered by eight propeller engines, this UAV has a giant wingspan in excess of forty-five meters, equivalent to a 737. Somewhat like the spy plane legends of the Cold War, such as the U-2, the Rainbow UAV will generally operate at extremely high altitudes. Indeed, the many advantages of this platform become immediately evident in appraising an unmanned aircraft designed to “fly even higher and even further” (非得更高更远).

In fairness, a rather substantial part of the Chinese article discusses the many possible civilian application for this aviation technology, whether economic or scientific. It is noted that the high-flying, extreme long-endurance UAV can offer most of the services of a satellite, but the “communications capabilities are more robust, the launch apparatus is much simpler and the . . . operating costs are significantly lower, as well.” Some of the civil sector missions that the Rainbow UAV could well take up, include such varied roles as pipeline security, forestry management, agricultural land use inspection and forecasting, as well as earthquake relief and other kinds of disaster response or search-and-rescue surveillance operations. Moreover, the craft seems ideally suited for atmospheric and climate change research. It could also be used for weather sampling.

Not surprisingly, the authors of this analysis also see many maritime applications for the Rainbow UAV as well. Fisheries management is an obvious and important domain that could see employment of this platform. But the article also sees the Rainbow UAV as having potential contributions to make in the fight against smuggling, piracy and even in a notional counterterrorism mission. The analysis suggests the Rainbow UAV could help to “assist the customs and the coast guard agencies to undertake real time surveillance of both the near seas and also the economic exclusive zone (EEZ)” (协助海关或海警部门进行近海或专属经济区的实时监视). With respect to “protecting maritime rights,” the analysis points out some advantages over manned systems and it is also mentioned that the Rainbow UAV can play a useful role as a communications relay link to remote reef bases.

The article notes that the discussion topic regarding “whether the Rainbow UAV can actually play a role in the anti-carrier system” has been a “hot topic” of discussion in China (‘彩虹’太阳能无人机在反航母体系中到底能否发挥作用 . . . 引起了. . . 热烈讨论). It is noted that Beijing now fields a wide array of surveillance assets from radars to sonar arrays, but it is also suggested that each of these elements has certain weaknesses. To build the first-rate maritime surveillance system that China is said to require, the Rainbow UAV is described as an “excellent choice.” (非常好的一个选择). Stressing both the time urgency and also the low cost, the authors argue that the Rainbow UAV can rather quickly—and quite cheaply—become a critical component of the developing system.

It is observed by the Chinese authors that tracking ships at sea is substantially easier that finding much smaller targets that can be camouflaged or buried on land. Stating the obvious, the article notes that aircraft carriers are a large and also loud target, giving off all kinds of emissions that can be also detected by passive means. “As a target, (the aircraft carrier’s) special characteristics are extremely obvious.” (作为目标物来说, 各种特征都是非常明显的的) In such a role of detecting adversary aircraft carrier groups, the Rainbow UAV is said to have an “enormous deterrence value and can then secure victory against the enemy.” (对敌人造成巨大威慑效果 , 进而赢得胜利). And yet the piece is also not naïve about the challenges either, admitting that the current prototype does not yet actually have the requisite capabilities for such missions. Moreover, it states that complications, such as weather or a target cloaking its locations by operating without sensors and communications, could present the challenge of finding a “needle in the big ocean” (大海捞针). Thus, the task of locating the enemy’s carrier group is surmised to be “actually not so easy” (并不是那么容易). Indeed, new Chinese UAVs will work together in this mission with a comprehensive surveillance system that includes new satellites, long-range patrol aircraft of various types, a variety of undersea sensors, as well as Skywave radars that can see out to sea for thousands of miles. This list, moreover, does not include the likely employment of the world’s largest coast guard, fishing and also merchant fleets that may also be useful for tracking adversary ships.

A recent issue of Aerospace Knowledge (航空知识) ran with a large and dramatic fold out spread of an interesting moment in aviation and geopolitical history. The foldout shows a painting of PLA soldiers crawling over the wreckage of an American U-2 surveillance aircraft that had crashed in China during the early 1960s. That wreckage is familiar to any who have visited the military museum in Beijing. It has been asserted that one of the major strategic results of that particular ambitious U.S. surveillance program was to encourage the Chinese to create a first-rate air force and air defense system as national priorities. It seems likely that another result could well be that Beijing will vigorously pursue a global surveillance posture akin to the American posture it has studied closely for so many decades.

Image: Military vehicles carrying Pterodactyl I unmanned aerial vehicles drive past the Tiananmen Gate during a military parade to mark the 70th anniversary of the end of World War Two, in Beijing, China, September 3, 2015. REUTERS/Jason Lee