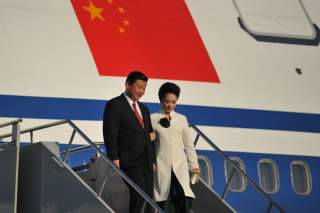 These are times of mounting drama and tension in the long power play of China’s rise in Asia. Thus, it is more important than ever for American policy makers to peer behind the curtain to see when rising-power loneliness is dressed as leadership and when confidence is a mask for insecurity.

Beijing and Moscow proclaim a new alignment, a united front of energy, arms sales and authoritarian posturing. In Shanghai, Chinese President Xi Jinping challenges the U.S.-led strategic order by suddenly invigorating a little-known regional summit that locks out most American allies. In Singapore, Japanese Prime Minister Abe implicitly offers Japan as a security partner for nations troubled by Chinese power; Secretary of Defense Chuck Hagel warns against Chinese “coercion and intimidation,” and a Chinese General publicly accuses both of crossing the line of acceptable diplomacy. Taken together, this suggests a bleak forecast for the Asian security environment—hardening and increasingly overt strategic competition between China and the U.S. alliance system, leading either to disastrous conflict or gradual U.S. backdown to allow a China-dominated order in a region central to global prosperity.

But the truth is far less simple, and deeply contingent on what happens next—on the choices ahead for leaders in Washington and elsewhere. The Asian strategic order may now be in play; its U.S.-led character is under question, but this is a complex, multilayered game. If China is seeking to rattle America and others—especially Japan, the Philippines and Vietnam—it may be miscalculating. In the long run, the premature displays of confidence China has lately shown are likely to harm its interests more than advance them.

Take the Chinese-Vietnamese face-off over the oil platform. The deployment of the moveable rig may well have been a decision to set a precedent in the South China Sea, to change facts in the water even while Chinese diplomats string out talks on a maritime code of conduct with the pathologically patient Association of Southeast Asian Nations (ASEAN). Perhaps the target was Vietnam precisely because, like Ukraine, it is not a U.S. ally—so the move has the double advantage of showing up the limits of America’s efforts to build new partnerships within the unsteady rebalance to Asia.

So far, China has indeed put great pressure on Vietnam. Hanoi does not want war, yet China will not let it talk, ignoring repeated requests for a diplomatic solution. Following the deaths of Chinese workers in rioting, Beijing has also tried to play up the vulnerabilities brought to the smaller country by economic interdependence—though Vietnam benefits much more from investment by other Asian countries than it does from China.

Yet all this may backfire on Beijing. Other claimant states in maritime territorial disputes with China now have no illusions about how an even stronger China would behave. This is just as likely to encourage them to intensify security links with the United States and Japan—and to invest more in their own defenses—as it is to make them accept China’s point of view over their own. Each in its way, Malaysia, Indonesia, Singapore and the Philippines are stepping up their cooperation with the U.S. Navy.

A defiant Vietnam will redouble its own efforts at developing an asymmetric deterrent against China (including submarines from China’s supposed best friend, Russia). Hanoi is now also likely to follow the Philippines in lodging some kind of international legal challenge against China, which would further isolate Beijing’s idiosyncratic version of sea law in the court of world opinion. Who knows—perhaps Vietnam may even be the first ASEAN country to call China’s bluff about the continually-delayed code of conduct negotiations, and instead encourage ASEAN to look for strategies less prone to sabotage by Chinese proxies like Cambodia. That is, unless the Philippines pulls the plug first.

China’s grand pronouncements about a Moscow-Beijing axis also warrant scrutiny. Some of the alarmist analysis of this in Western media is downright absurd, and unhelpfully amplifies Chinese and Russian propaganda. This narrative is that the authoritarian giants are forming a massive strategic, economic and diplomatic counterweight to U.S.-led alliances at each end of the Eurasian landmass. Some accounts even suggest that India will join them in a mighty new ‘RIC’ triangle against America and its allies.

Of course, as in any marriage of convenience, China and Russia have mutual benefit to be gained, at least for now. A huge gas deal, many years in the making, has suddenly been finalized. There is talk of elaborate new projects in scientific collaboration, such as a floating nuclear reactor. More immediately, the Chinese and Russian navies have staged large-scale war games in the East China Sea, seemingly a signal to the United States and Japan. Russian arms sales to China are picking up, after a fallow period in which Russian weapons makers had to put up with the awkward business of China making its own versions of their wares through reverse-engineering initial purchases.

But the pomp and posturing camaraderie of the recent Putin-Xi summit is in inverse proportion to the real strategic trust between Russia and China. Moscow does not want to be China’s junior partner, and reserves the right to sell gas to Japan and advanced weapons to Vietnam and India, hardly the actions of a bosom friend identifying China’s security with its own. Russian and Chinese strategists will keep eyeing the other power with long-term unease. The rationales for their nuclear arsenals have long included each other: one reason for Russia’s determination to keep tactical atomic weapons and a first strike doctrine is its diminishing conventional strength relative to China’s. Were it to find itself in a real military crisis with America, China would hardly expect Russia to put its own security at stake, and in any case, Moscow’s Pacific Fleet remains underwhelming. And the idea that India—the same India that mistrusts and arms against China while embracing Abe’s Japan—would categorically side with China and Russia against America in any meaningful military sense is so surreal that it doesn’t warrant further analysis.

Much more worth scrutinizing is China’s claim to be at the heart of a new Asian diplomatic architecture that privileges ‘win-win’ Asian management of Asian security problems. In May 2014, Xi Jinping announced this ‘Asian security concept’ at a lavish summit in Shanghai for the Conference of Interaction and Confidence-Building in Asia (CICA). This is a grouping that had languished, barely noticed for years, in the margins of the crowded calendar of Asian diplomatic meetings. Why its sudden elevation by China?

On the surface, the logic and morality of Xi’s argument can hardly be faulted: of course Asian powers should be the ones to resolve Asian challenges, right? The problem is: which problems and which Asia? The CICA’s claims to be comprehensively and exclusively an Asian institution are tenuous and it is most definitely not of the Asia-Pacific. Its members include Egypt, Iraq and Iran but not Japan, the Philippines or Indonesia, which are mere observers. Singapore, Asia’s consummate conference convener, doesn’t get a look in. But Russia is there and—no surprise—the United States is out.

None of this is a mystery. In essence, the CICA was a low-key Kazakh initiative from the early 1990s, with a modest post–Cold War agenda, but now dusted off and plumped up by a China that is growing frustrated with the way the Asia-Pacific’s preferred diplomatic institutions have matured over the past decades.

Those organizations, like the East Asia Summit, the ASEAN Regional Forum and the ASEAN Defense Minister’s Meeting Plus Eight, may be slow to evolve and dependent on the comfort levels of Southeast Asian countries traditionally cautious about offending China or anyone else. But they are making progress as pillars of a multipolar regional order, in which norms of noncoercion, respect for law and a rules-based approach get a hearing among nations with diverse political systems.

Moreover, their membership accurately matches an Asia-Pacific, or more precisely Indo-Pacific, footprint. This reflects the sustained role of the United States in Asia, India’s growing interests and reach, Japan’s enduring importance, the accomplishments of ASEAN as a core regional institution, Australia’s interconnectedness with Asia, and China’s legitimate and irreversible links with Southeast Asia and the sea lanes of the Indian Ocean, including through vital oil supplies and wider trade and investment.

Part of the real reason for China’s new emphasis on the CICA and its arbitrarily landlocked map of Asia is that, in this post-charm offensive phase, Chinese diplomacy seems comfortable only on a stage it manages. This reading is borne out by the extraordinary outburst of China’s senior representative at the 2014 Shangri-La Dialogue, an inclusive and structured regional forum run by a UK-based think tank, in Singapore. On June 1, General Wang Guanzhong publicly accused U.S. Defense Secretary Chuck Hagel of using his address to the same gathering for issuing ‘threats’, ‘intimidation’ and ‘provocation’. He attacked an earlier speech by Japanese Prime Minister Abe in similar terms. Abe had, in fact, barely mentioned China by name, although his carefully worded remarks made clear Japan’s newfound willingness to help other countries build capacity and coalitions to protect their and Japan’s interests in opposing coercion and maintaining freedom of navigation. Apparently, for this transgression, General Wang went so far as to describe Abe’s address as ‘unacceptable’ and ‘unimaginable’—as if a foreign prime minister’s words are for a military man to circumscribe.