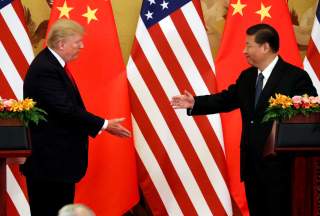 U.S.-China relations are increasingly complex and intertwined. Both countries have called for greater cooperation stands in stark contrast to recently intensified mistrust. Plans for the United States and China to focus on building a mutually trustful relationship are unrealistic at this juncture, given mutual skepticism of strategic intentions and unwillingness, on either side, to display strategic vulnerability. Alternatively, the best step forward is aiming for a constructive relationship based on interdependence and confidence wherein both sides can predictably pursue their rational self-interest.

Power politics between the two great powers is inevitably a zero-sum game; a rise in Chinese power is treated as running counter to U.S. interests, and vice versa, regardless of intentions. While Washington remains skeptical of Beijing’s ambitions in its “Peaceful Development” and Belt and Road Initiative, Beijing is equally suspicious of the U.S.-led alliance system and regards it as a tool left over from the Cold War, designed to isolate and contain China. Tallying recent developments in the long list of contentious bilateral issues reveals a pattern of widening strategic mistrust that must be managed.

Impinging on arguably the most important Chinese core interest, Washington continues to strengthen its diplomatic and military engagement with Taipei, notably through the 2018 Taiwan Travel Act, which enables all levels of bilateral official exchange. Just days following the act’s adoption, a State Department official, in meeting Taiwan’s President Tsai Ing-wen in Taipei, remarked that U.S. support for Taiwan “has never been stronger.” The Chinese military has held live-fire exercises in the Taiwan Strait in protest of the United States playing the “Taiwan card” to contain China, yet Washington accuses Beijing of aggressively challenging the status quo in the Taiwan Strait, maintaining that deepening its ties with Taipei falls fully in line with policy.

Despite U.S. criticism, Beijing continues to reclaim and militarize disputed islands in the South China Sea, changing the facts on the ground. Washington has stepped up its naval patrols in response and has retracted its invitation for China to participate in the 2018 Rim of the Pacific multilateral joint military exercises. Beijing remains defiant, claiming this issue of national sovereignty should not concern Washington. The resulting breakdown in effective communication between the two militaries exacerbates mistrust and tensions.

A brief respite from tensions on the Korean Peninsula immediately following the Trump-Kim summit obscures the continuing U.S.-China rivalry in Northeast Asia. While an increasingly bellicose White House had sought the strongest position possible in the lead-up to the summit, Beijing had simultaneously strengthened its strategic and trade ties to Pyongyang, playing a unique role behind the scenes. Beijing’s wavering cooperation on international sanctions has continuously begat U.S. skepticism of its impartiality in reining in North Korea, which, alongside pressure on trade from Washington, continues to fuel uncertainty in the relationship.

Drawing great protest from Beijing, the U.S. explicitly labels China in its National Security Strategy and National Defense Strategy as a revisionist power seeking to “shape a world antithetical to U.S. values and interests” and displacing U.S. preeminence in the Asia-Pacific region.

The Trump administration also propagates its “Free and Open Indo-Pacific” strategy, which endeavors to consolidate the U.S.-led regional order and bring India, Taiwan and other democratic states together to counter a rising China. When taken together with the revival of the Quadrilateral Security Dialogue—also known as the “Quad”—the adversarial posturing towards China is very apparent in U.S. plans to link regional powers and deepen economic and strategic coordination with other countries in China’s backyard. China, on the other hand, has steadily advanced its grand strategic vision of a Sino-centric economic order across Eurasia under the auspices of its Belt and Road Initiative, allowing China to supplant U.S. influence.

The U.S.-China relationship is rife with mistrust, and the trajectory of the U.S.-China relationship marks the resurgence of great-power politics in a multipolar international order. The think-tank community’s prescription that the United States and China must reverse this trend by building trust is unrealistic. Conversely, the idea that both sides are destined for conflict is overly simplistic. As the United States and China enter a new phase of prolonged strategic competition, both sides should aim for enhancing strategic predictability through increased interdependence.

It is within the interests of both powers to construct a stable and prosperous international order. The era of expecting China to simply conform to requirements imposed by a largely unipolar, Western-centric order is over, and it is necessary to recognize the reality of an emerging multipolar order marked by more equal footing and buy-in from China. China’s economic growth over the past few decades is due in no small part to its deepening, albeit conditional international engagement. To best serve its interests, China should double down on its participation in the existing order, rather than push forward a separate, parallel order. The more each side disentangles from the other, the fewer interests both will share, thus, making conflict a far more likely outcome.

Before this can happen, Washington and Beijing must first sit down to discuss, and more importantly understand each others’ set of long-term military, economic, and political interests and aspirations. Interdependence will necessitate further congruence of interests. Communicating a commitment to reliability, rather than trust, will yield better results.

Zoe Leung and Jace White work with the Asia-Pacific program of the EastWest Institute, which aims to bring together key stakeholders throughout the region to engage in constructive dialogue and conflict prevention.