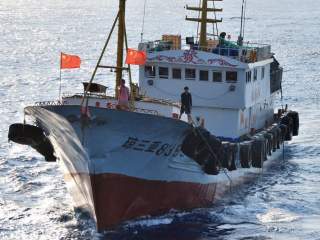 Not long before the destroyer USS Curtis Wilbur recently conducted freedom of navigation operations (FONOPS) off the Chinese-occupied Paracel Islands, an interesting maritime exercise took place in waters off southern mainland China. The images released in the public domain are interesting to note; many of the ships have hull numbers that carry the prefix 湛渔, or Zhanyu (the prefix Zhan for Zhanjiang, where the vessel is based, and Yu for fishery). This feature, alongside their distinct physical attributes, might give the impression that they are commercial deep-sea seiners and trawlers, which typically populate China’s vast fishing fleet.

But closer examination shows these ships to be no mere fishing vessels. Even though some of them, for instance Zhanyu 819, 820 and 822, have what appear to be seine winches astern, the cluster of antennae on board was conspicuous. Moreover, instead of commercial livery, all ships pictured were painted in typical People’s Liberation Army Navy (PLAN) gray. These were probably some of the rare few high-resolution pictures which detail the bulk of assets belonging to the PLAN South China Sea Fleet Unit 488, based in Maxie, Zhanjiang. This obscure flotilla has sister units serving with the other two PLAN fleets, also equipped with such intelligence trawlers (AGIs), dubbed the Type-792 class.

Though part of the PLAN order of battle, these AGIs should be clearly distinguished from purpose-built intelligence ships such as the Type-815 Dongdiao class, which lack the “fishing vessels” disguise (it clearly has no fishing gear and sports a conventional warship design) and have also been frequently observed. But these innocuous-looking “fishing vessels” that roam the disputed waters in the East and South China Seas were often relegated to the shadows of their glamorous PLAN combat brethren. Despite having existed since the 1950s, these enigmatic forces—locally nicknamed “sea phantoms” (or “little blue men” as Andrew Erickson and Conor Kennedy called them)—and the ramifications of their activities have been underexamined.

When Beijing first used fishing vessels for militarized purposes, it was originally intended as a stopgap for the shortfalls of Nationalist navy ships inherited by the Communist regime. But these vessels were unreliable, built with wooden hulls and underpowered machinery which severely limited their range, endurance and seakeeping qualities, thus confining them to inshore and coastal duties. This state of affairs continued until 1952, when several hundred-ton Japanese fishing vessels were seized by the Chinese on illegal fishing charges. These ships so impressed Beijing, with their sturdy ocean-capable hulls and reliable machinery, that they were turned into improvised fire support vessels with sixteen-tube 132-millimeter rocket launchers. In January 1955, they played a crucial role in the Communist capture of the Nationalist-occupied Yijiangshan Island. Since then, besides wartime support roles, these pioneer “sea phantoms” performed functions such as intelligence gathering, countersurveillance and the resupply of offshore PLA garrisons.

Beijing subsequently built better “sea phantoms,” drawing from the strengths of Japanese and Western oceangoing fishing vessels. Those constructed in the mid-1950s had wooden hulls and 250-horsepower engines, for a maximum speed of 8.5 knots. Those built in the late 1950s came with steel hulls and 350-horsepower engines. In 1963, the 29.6-meter-long Type-801 was introduced, displacing 250 tons and capable of 9.5 knots. Shortly after, a Jiangxi shipyard built a new, forty-seven-meter AGI, which displaced 600 tons and was capable of sixteen knots. In 1979–1980, another shipyard in Xiamen built newer models with 400-to-600-horsepower engines capable of making 10.5–11 knots.

In the early decades, especially the 1960s, the primary reconnaissance tool was the locally made Hai Ou (Seagull) camera for these “little blue men” to take pictures. Several AGIs were even armed with such heavier weapons as thirty-seven-millimeter antiaircraft guns. However, these vessels remained underpowered and possessed limited endurance, with spartan allowances for the comfort of the crew. These limitations, which prevented the “sea phantoms” from undertaking oceangoing missions, were well exposed during an incident in the South China Sea in 1979.

According to an article published in December 2015 by Global Times, a Chinese newspaper affiliated with the Chinese Communist Party, back in 1979 the “sea phantoms” accomplished China’s first-ever attempt at “close-in” surveillance of a foreign aircraft carrier.

Shortly after the 1979 Sino-Vietnamese border war erupted, the Soviet Kiev-class “aviation cruiser” Minsk passed through the Straits of Malacca en route to Vietnam’s Cam Ranh Bay to “show the flag” in support for Hanoi. In response, Beijing deployed Chinese AGIs from Yulin, Zhanjiang and Guangzhou in three task groups. One of them detected signals from the Minsk but was forced to abort tracking the Soviets when one of its AGIs suffered an engine malfunction. The other task group managed to detect the Minsk carrier task group at twenty-four kilometers but was too underpowered to catch up with the Soviets. The last task group, which was closest to the Minsk, managed to approach the target at noon.

One of the AGIs, Shuguang No. 2, was buzzed by the Minsk’s Yak-38 fighter jet, which prevented it from conducting close-in surveillance on the carrier. It was only until later at noon that another AGI, K-429, passed at high speed alongside just fifty meters from the Minsk’s port, forcing the latter to reduce speed and signal collision warning. The carrier then attempted to repel K-429 by signaling to steer port. However, the pesky AGI signaled to steer starboard instead, thus compelling the carrier to halt and allow it to pass alongside at just twenty meters. For almost two hours, this small “sea phantom” task group managed to shadow the Minsk, reaping a bonanza of valuable intelligence.

While it was no doubt an impressive feat for the “sea phantoms,” this incident nonetheless exposed severe limitations, especially the vessels’ inability to match their targets’ speed and maintain station so far out at sea. The 1979 Minsk encounter plausibly exerted a significant influence on the subsequent development of the “sea phantoms.” Fast-forward to today: Chinese AGIs sport not only steel ocean-capable hulls, but also advanced satellite navigation and communication systems, not to mention a sophisticated array of electronic intelligence-gathering equipment to help build an “electronic situational awareness picture” for Beijing.

However, the 1979 Minsk incident more ominously shows Beijing would not hesitate to pit its smaller, physically constrained “sea phantoms” against much larger rivals. They will continue to be deployed aggressively as a foreign policy instrument. Chinese AGIs were a constant presence off Taiwan amidst cross-Strait tensions, especially in 2000–2008. They were also observed operating around Japan’s remote Southwest Islands, especially after tensions flared up over the East China Sea dispute. The “sea phantoms” could be intermingled with the numerous Chinese fishing vessels lurking off the Japanese coast in recent times, ostensibly harvesting valuable sea products such as red corals.

As tensions brewed up in the South China Sea, there was also an evident spike in incidents involving the “sea phantoms” in the area and surrounding Southeast Asian littorals. In April 2013, the forty-eight-meter-long Chinese trawler Min Long Yu No. 63168 was found stuck in the Philippines’ Tubbataha Reef and subsequently detained. At first it was thought to be engaged in illegal fishing; later it was revealed that the vessel contained no fish catches—but rather endangered pangolins. While Manila sought to downplay the possibility of Chinese espionage mission, there were telltale signs pointing to an unusual Chinese intent, one being the twelve-man crew instead of the usual thirty or more for such Chinese trawlers. An anonymous Philippine military source also revealed that the Chinese fishermen had “flawless” complexions instead of the dark, leathery skin typical of fishermen. Perhaps not too coincidental was that three months prior, the minehunter USS Guardian also ran aground on the same reef.

Improved oceangoing capabilities have taken the “sea phantoms” beyond China’s immediate regional waters; some such cases even date back decades. For example, in August 1994, the Indian Coast Guard apprehended three Chinese trawlers manned by fifty-five crewmembers off Narcondam, who were found to possess sophisticated radio equipment as well as highly detailed maps—some reportedly published by the PLA—of the Bay of Bengal, the Andaman Sea and hydrographic details of the strategic Andaman and Nicobar Islands, where the Indians maintained a military outpost. Between April and August 2011, the Indians tracked a Chinese trawler suspected to be an AGI operating in waters close to the same islands and surreptitiously monitoring Indian military activities.

At times, the “sea phantoms” have behaved more aggressively than usual, even taking on foreign naval vessels. Notably, in March 2009, two “small, Chinese-flagged trawlers”—undoubtedly the “sea phantoms”—took part in aggressively shadowing and maneuvering close to USNS Impeccable off Hainan Island. Their crews first closed within fifty feet of the American vessel, and then twenty-five feet despite being pummeled by water hoses. They even attempted to snag the acoustic device towed astern of the Impeccable and tossed objects into the water to obstruct its path. Last October, while the PLAN behaved professionally, Chinese merchant or fishing vessels which U.S. Navy authorities called “not as demure as the Chinese Navy” maneuvered aggressively around the destroyer USS Lassen as it conducted FONOPS off the artificial island that Beijing built on Subi Reef.