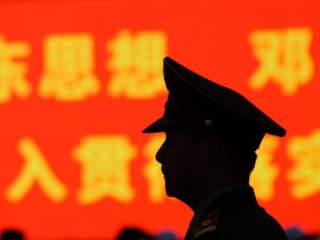 The contrast is striking. The United States, especially during this political season, talks to itself about the hard choice between sustaining its global footprint and “nation building at home.” China’s leadership, meanwhile, has launched ambitious programs in both areas, enlarging its global footprint and re-orientating the emphasis of its economy. The distinction is even more striking when one considers the disparity in the resources available to each country. America’s dominance and overwhelming resources gives Washington and the country at large the luxury to posture and procrastinate decisions. Beijing, with no such luxury, has had to grapple with its issues more aggressively and decisively.

Take the geopolitical picture. Inaction leaves Washington dominant. It has long enjoyed hegemonic status across the Pacific. Its Japanese, South Korean, Taiwanese and other alliances have helped bring that dominance right up to China’s territorial waters. Whatever benevolence Washington claims for its intentions, it is hardly surprising in the circumstance that Beijing wants to alter matters by pushing Washington’s power projection back. Even if China’s leadership were to believe America’s claims of good will, it would still feel crowded by the status quo.

Beijing could have responded more effectively than it has as of late. Its provocative actions seem only to have driven other Asian powers to take measures that will check Chinese power, including aligning closer with the United States. But if Beijing has made mistakes, the pressure for decisive action is clear. In contrast, Washington must feel no impetus to change anything and every temptation to believe that it can hold its dominant position if it acts as little as possible.

China has a much more urgent need to act on the economic front as well. To be sure, the U.S. economy could use help. Unlike China’s, however, it does not stand at a critical juncture in its fundamental development curve, one that demands a response from the nation’s leadership. China, quite simply, has reached a new phase in its development, making it imperative that Beijing revise expectations about the future pace of growth.

Beijing, of course, saw the prospect of a growth slowdown and the need for a shift in the economy’s focus years ago. As early as the first decade of this century, government commentary laid out a response. Noting that in the prior twenty years China’s exports had grown from next to nothing to fully 12 percent of the global total, it bluntly warned that such gains were unlikely to continue. It was readily concluded that future growth would depend on a shift away from exports toward a more consumer-driven economy. Such a shift is, however, no small task, even for a command economy like China’s. The commentary back then and subsequent official statements have acknowledged that the effort will take time and considerable structural and policy changes.

In some respects, the adjustment has come harder for China than it would have for other nations. A full blooming of the Chinese consumer, for instance, demands an open, active financial sector, one that can provide levels of consumer finance and a range of insurance products largely absent from China today. To build such structures at home would take time. Beijing could develop them more quickly if it were to allow foreign firms into its financial arrangements. But the Chinese Communist Party (CCP) has trouble with such a solution because it would weaken the rigid control the party clearly desires. Beijing might also get the Chinese consumer to spend more aggressively and save less ardently if it were to relieve the uncertainties imposed on everyday life by party corruption and arbitrary rule. But the party clearly has difficulty with such measures, too.

And so the shift has proceeded slowly and growth has slowed accordingly. Still, years after the government laid out its plan, Chinese consumption amounts to only some 30 percent of the economy, compared with 70 percent in the United States. Even if China had the ability to shift the economy more quickly than it has, the current, more mature phase of development would have impelled Beijing to cope with a slower pace of economic development than in the past.

Every economy, when it first begins to develop, grows at a rapid rate. China was no exception. The process started in the 1980s after policy changes allowed first a more liberal agricultural market and then more latitude for for-profit businesses, mostly manufacturing for export. Both policy shifts unleashed a more than twenty-fold explosion in the number of independent enterprises and drew many more people into the workforce. New enterprises invested in new equipment and, especially as trade with Europe and the United States increased, applied more up to date and efficient practices. Still more important as a driver of growth, the liberalizing reforms invited a more efficient allocation of human, natural and capital resources so that total factor productivity surged, first in agriculture and then in non-state business enterprises.

This process has brought remarkable change. In the late 1970s, some 69 percent of the workforce toiled on the farm. That proportion has dropped to only 26 percent more recently, while the proportion of the workforce in private industry has risen from 15 percent to 62 percent. In the late 1970s, agriculture and the state sector absorbed 73 percent of the economy. More recently, that figure has fallen to 30 percent, while private industry’s share has risen to 70 percent.

But at each step in the process, the potential for further gains has slackened. An economy, after all, can only make the major changes in reorganization once. One could liken the process to the development of a road system. The initial paving of a dirt road allows for a huge step up in its reliability and the amount of traffic it can carry in all weathers. Better paving improves its efficiency but by no means to the degree that the initial paving did. The same could be said for widening the road and grading it better. Each step improves the highway and makes it more useful to the economy but not the leap offered by the initial paving.

Though China has used up the easy efficiencies in the early stages of its development, it remains far from the more effective economic organizations exhibited by the United States and other advanced economies. The opportunities to go further should enable it to grow faster than the United States and other advanced economies and perhaps someday catch up and produce levels of economic welfare enjoyed by populations in these countries. But having already gone far in the process, the most rapid gains lie in the past.

Against this background, the popular anxiety over China’s growth slowdown is more than a little perplexing. Many Western policy makers, investors, and media sources openly fret over the deceleration in the pace China’s economic advance from 10-12 percent annually some years ago to 5, 6, 7 percent more recently. These discussions have labeled the growth deceleration a sign of economic ill health and perhaps a preliminary to collapse. To be sure, not all is well with the Chinese economy, as it seldom is with any economy, but this anxiety is nonetheless misplaced. Rather than problems, it would seem simply to suggest that China is managing its transition, passing successfully into a more mature stage of development and perhaps also making some progress shifting its engine of growth toward services and the consumer. It is noteworthy in this regard that these reduced growth rates about which so many seem so worried still outstrip those in the United States and the rest of the developed world.

None of this suggests that China is without economic or geopolitical problems. On the contrary, it has made mistakes in the past, is no doubt making them now and will make new ones in the future. But it speaks to at least an effort at good management that China’s leadership is willing to deal directly and decisively if not always effectively with its needs, on either the geopolitical or the economic front. If China’s leadership has enough other unattractive features to make Americans and Europeans grateful for the governments they have, lethargic though they might be, there is nonetheless something to envy in a leadership and a population that shrinks not from the demands of the moment.

Milton Ezrati is a contributing editor at the National Interest, an affiliate of the Center for the Study of Human Capital at the University at Buffalo (SUNY), and recently retired as Lord, Abbett & Co.’s senior economist and market strategist. His most recent book, Thirty Tomorrows, a discussion of how the world’s economies can cope with aging demographics, was released recently by Thomas Dunne Books of Saint Martin’s Press. Follow him on Twitter @miltonezrati.