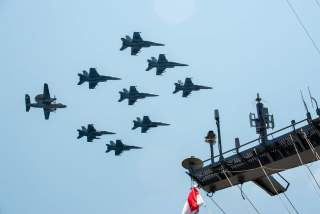 China, manifestly formidable, is still typically analyzed as a “rising power” or an “emerging power,” one challenging “established powers.” Connoted by these terms is a ridiculously unhistorical image: China-as-parvenu. A longer look back may better name—and explain—what the world now sees.

From the Portuguese in the sixteenth century to the Japanese in the twentieth century, Western and Westernized forces in Asia enjoyed an ever increasing advantage: firepower, first afloat and then also on land.​ Its invention of gunpowder and rocketry notwithstanding, China faced a firepower gap that had widened decisively by the 1830s. Yet China’s governments, native and assimilated, functioned competently enough as late as 1839, when the opium trade was being vigorously suppressed. Ironically, this very show of competence brought China into conflict with the drug-running British East India Company, whose own private forces, as supplemented by the Royal Navy, China could not match.​

China’s losses in the two Opium Wars, 1839–42 and 1856–60, were ruinous, shredding sovereignty and conceding to industrialized powers extraordinary territorial, mercantile and jurisdictional privileges. Arising in parallel, and largely in response, was the worst of all modern rebellions, the Taiping, 1850–64, a societal injury defying full recovery. The next century, while different, was not much better and was followed by the Cultural Revolution, from 1966 to 1976, a denunciation not only of the “Four Olds”—customs, culture, habits, ideas—but of modernity, too.​

Opening in catastrophe and closing in catatonia, this 137-year stretch, from 1839 until 1976, was a dark age. The period since, from 1976 to the present day, has been a renaissance. Granted, this dark age was not without its brighter spots and this renaissance not without its darker ones, but the labels stick, and they instruct.

From 1976 on, with Mao Zedong gone and with Asian states, most disturbingly Japan, prospering around it, China, rich in poverty, herded its ultra-low-wage workforce down the capitalist road and earned its way to the front rank of nations. China aggressively pursued trade, most surprisingly and most critically east-west trade, and from the proceeds of this trade accumulated the wealth it needed to finance its own development.

Beginning some six centuries earlier, the houses, cities and principalities destined to become Europe’s renaissance powers likewise pursued trade—eventually east-west trade with Islamic centers—and, through those centers, with distant Asian peoples. From the proceeds of such trade, Europe’s renaissance powers accumulated the wealth that financed their own development and, most memorably, their patronage of creative genius. They also fought to steal this trade from one another, slaughtering many and suffering much. Portugal, for example, having pioneered a route around Africa, forcefully shifted Europe’s single most profitable import—spice—from a water-land-water route serving Venice to a water-only route serving Lisbon.

What Europe’s renaissance strengthened was a continent led by fractious ruling families. What China’s renaissance strengthened was a continent-sized country led by a disciplined ruling party adjusting to new management. Europe’s enterprises competed at home and fought abroad; China’s enterprises competed with each other to be allowed abroad. Europe’s purpose was not unitary; east-west trade and, eventually, global imperial exploitation advanced some regimes over others. China’s purpose was more nearly unitary; the transfer—or imitation—of technology and, in parallel, the mass overseas education of China’s own aspiring technologists, advanced one nation over many others.

China’s View of Itself and Others

Renaissance China was no parvenu, no newcomer. The powers that had plundered China had been the newly arrived, the upstarts, and their day was closing, at least regionally and probably globally. Even as China delivered itself reborn into a brilliant dawn, Maoist red suffused with imperial yellow. Self-assurance, once fragile, was growing firm; progress, once foreign, was also domestic; innovation, once always an import, was increasingly to be an export.

China’s products fill the world’s shelves, its graduates and graduate students occupy the world’s laboratories, its invested profits fill the world’s treasuries. Even its main language, Mandarin, has advanced, packing into Western classrooms tonally adventurous students convinced their future will be Sinocentric. These are not Potemkin-village achievements; China’s overachievements are real, too. Its renewable-energy production and consumption both lead the world, although much of its productive capacity must stand idle, a threat to overload its national electrical grid. Its Quantum Science Experiment Satellite, “Mozi,” designed to test data encryption through entangled-photon teleportation, is the first of its kind and has been orbiting the earth since August 2016. Taikonauts have yet to walk on the moon but are more likely than are astronauts, or cosmonauts, to recover Apollo’s golf balls. And, ranked by number of vessels, China’s navy, whatever its mission, is now second only to America’s navy.

The Soviet Union was, more than metaphorically, a puzzle, its parts glued together, whereas China is closer to being a true nation-state than any other large country has ever been, and it is far more populous than smaller nation-states, such as Japan or Iran. The Soviet Union came unglued during what might have become a renaissance—the Gorbachev period—and its chief successor, the Russian Federation, has managed no more than the sallow complexion of a crony-capitalist petro-state. Russia, however impressive its ability to spoil, steal and raze, has become a commodity producer, a price taker, one surprisingly susceptible to economic sanctions. It probes neighboring airspace with strategic bombers famous not for stealth but for noise. Its one aircraft carrier—old and small yet still sent for show to the Syrian coast—steamed through its own soot, projecting power only after finding a port allowing it to refuel. In sharpest contrast, China, wanting to project power far off-shore, methodically built bases by terraforming reefs into “occupied features,” converting navigational hazards from natural to political.

A renaissance is not to be mistaken for an enlightenment. China may now be a capitalist power, but it is not a liberal internationalist power, nor is its regime respectful of civil liberties at home or concerned for civil liberties abroad. Noting manifest improprieties—politically motivated investments, protean cybercrime, intimidation of China’s own diaspora and so forth—neighboring states long since grew wary and are well advised to remain so. Renaissance China is confident not only in its strength but also in its right to exert that strength, even to revise the global system to accommodate its ambitions, many of these ambitions reasonable but some others revanchist or even atavistic. No modern experience—not the defeat of imperial rivals or nationalistic aggressors, not the containment of communism, not the warming of the Cold War—seems a suitable guide for nations worried by what they see.

China will not go away; China cannot be outlasted. It has already eclipsed its greatest modern rivals, Meiji-Taisho-Showa-Heisei Japan and Soviet Russia. It buys commodities from the Russian Federation because Russia sells them cheaply and delivery is convenient, not because China is dependent on Russia. Indeed Russia could end up a Chinese client if it fails to mature its economy past kleptocracy and commodities. China’s threat-based expansion has so far been exclusively local—hardly a global concern, or even an American concern, so China seems to believe. China would be disquieted by economic decline in any of its major trading partners, especially Europe and the United States, but no European navy, the Russian one aside, matters in the Pacific, and China could hardly think the United States much more than troublesome: a non-Asian state with an unsustainable and unnecessary Asian presence, a high-spending visitor whose visa has expired, not a fated rival.​

China wants to be itself: Asia’s leader if not the world’s. China wants the United States to know its place, to go home and stay there, to keep Europe prosperous, to impose peace on the Middle East, and, obviously, to continue spending money in China—but not so irresponsibly as to default on the trillion dollars of its debt that China now owns. The United States, in contrast, is committed to its allies and, somewhat fitfully, to liberal internationalism, but it is also deeply and seriously and increasingly dependent on Chinese financing to run its own economy, even to finance its own defense modernization. Cold War verities are dangerously mismatched to this relationship.​

America’s View of Itself and China

The United States, long accustomed to technological superiority in security confrontations, will soon meet China as a peer power, either in confrontation or in condominium, which latter is to say in cooperation, an outcome hard to square with ambitions of either country yet likely superior to any practicable alternative. While now orthogonal to American doctrine, such an outcome was previously a part—but a naïve part—of that very doctrine. Franklin Delano Roosevelt, whose family fortune had been based first on his grandfather Warren Delano’s talent for addicting the Qing emperor’s subjects to opium, firmly foresaw American partnership with a free and democratic China, even a Christian China, a “New” and Americanized China. Clearer judgment must now prevail.

Crucial to avoid—or finally to abandon—is procrustean analysis wherein the American-Chinese dyad is distorted to fit a familiar frame, whether Cold War containment or Cold War termination or another off-the-shelf theory. This dyad must be accommodated on made-to-measure terms, with a mutually embittering history mutually understood, and a mutually offending present mutually detoxified.