Churkin: A Tribute to an Adversary 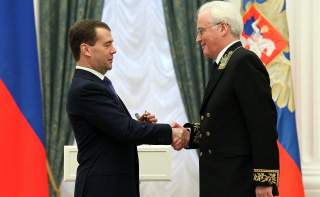 The unexpected recent passing of Russia’s ambassador to the UN, Vitaly Churkin, led me to reflect on my time at the UN as the United States permanent representative, during which he was my counterpart and frequent interlocutor. Ambassador Churkin was a strong advocate of his country’s position at the UN Security Council—a first-rate diplomat, a worthy adversary with whom I enjoyed negotiating, and a very good colleague.

We Americans often try to place foreign countries in one of two baskets: friendly states with whom we can work, and adversaries with whom disagreement is inevitable and constant. This approach causes us at times to tend to overlook the possibility of finding common ground, on specific issues, with countries with whom we otherwise have adversarial relations.

Good, warm personal relationships cannot overcome fundamental differences between states. They can, however, assist in finding those commonalities despite wider differences. I had this kind of constructive relationship with Churkin at the UN from 2007 to 2009.

To be sure, there were cases when the U.S. and Russian positions were so at odds with one another that an agreement was not possible. One was Kosovo. The United States and Europe sympathized with Kosovo’s drive for independence from Serbia. While we hoped that both Kosovo and Serbia, as separate countries, could modernize, democratize and eventually join the European Union, Russia feared that an independent Kosovo would weaken Serbia, with historic ties with Russia, and that Kosovo would become a Western ally against them.

I engaged repeatedly with Churkin to explore a mutually acceptable path to independence for Kosovo. We proposed various ideas to address Russian concerns related to the Serb minority in Kosovo. Ultimately, we concluded that there was no scenario in which Russia would formally acquiesce to Kosovo’s independence, so the United States and its European allies on the Security Council cooperated with Secretary General Ban Ki-moon, who instructed the United Nations Interim Administration Mission in Kosovo to lay the groundwork for independence. While Russia remained opposed to Kosovo’s independence, Churkin did not force the issue by insisting on a debate and vote on the issue. Kosovo declared its independence in February 2008.

Another irreconcilable difference arose in the summer of 2008, when Russian tanks moved into Georgia. The Security Council convened an emergency session, but three days of intense negotiations produced no resolution. Churkin, using all his skills, held the line for Russia’s position. On August 11, soon after the start of the war, Russia’s Foreign Minister Sergey Lavrov told Secretary Rice that “Saakashvili [the Georgian president] must go.” Rice believed the Russian foreign minister had secretly demanded the overthrow of a democratically elected president.

Secretary Rice instructed me to reveal to the Security Council and the world what Lavrov had demanded. I did, characterizing it as “totally unacceptable.”

Churkin then admitted that Lavrov and Rice had had a “confidential phone call” and proceeded, indirectly, to confirm my accusation: “Regime change is an American expression. But sometimes there are occasions, and we know from history, that there are different leaders who come to power, either democratically or semi-democratically, and they become an obstacle.”

There was some sympathy at the Security Council for Russia’s position on Georgia, in part because of Churkin’s adept diplomacy and some of Saakashvili’s tactics, but Lavrov’s attempt to secretly oust the Georgian leader was a step too far. This overreach undercut Churkin. China, ultimately, sent a resounding signal through its decision to abstain rather than join Russia’s veto of the Georgia resolution.

Churkin and I had dealt squarely. But he was very displeased with our decision to make the content of the phone call with Lavrov public. Churkin accused us of engaging in “Trotskyite diplomacy.” Even in the face of serious clash, Churkin and I maintained positive personal relations, and indeed, in a private session during the height of the conflict, Churkin and his wife told us that they had honeymooned in Georgia, and retained a fondness for Georgian hospitality and the Georgian people.

Our ability simultaneously disagree and, where possible, to cooperate on other issues enabled the United States and Russia to reach agreements on Iran’s nuclear program and the international tribunal for Lebanon. These cases involve lessons that could help U.S. diplomacy navigate current and future situations.

In response to the assassination of former Lebanese prime minister Rafik Hariri, the United States and other states sought to create a special tribunal to investigate the matter. However, for the Hariri tribunal to proceed with its investigation and to be able to compel cooperation, the Security Council needed to establish the court directly under its Chapter VII authority.

Russia was opposed. I remember Churkin arguing that the tribunal would exacerbate divisions within Lebanon. Moscow’s real concern was Syria, and strong opposition to the tribunal from Syrian leader Bashar al-Assad, Russia’s only ally in the region. Assad expected, and indeed demanded, that Russia veto the resolution in support of the tribunal.

There was broad support in the council for the resolution. Moscow effectively stood before the world as the only obstacle to justice in a crime that clearly violated international law. Churkin held the line, but then showed flexibility, and we worked the issue. Ultimately, with minor changes in wording and intense engagement by the United States and the Lebanese government, Russia decided not to stand in the way of the tribunal.

On Iran nuclear sanctions, Russia and the United States cooperated from the start. By the summer of 2007, intelligence estimates had shown that Iran could have three thousand centrifuges operating by the end of the year. I was instructed to press for tougher sanctions on Iran.

Long conversations with Churkin brought Russia’s views to the surface: Moscow genuinely felt threatened by the prospect of Iran possessing nuclear weapons. We agreed on a resolution imposing additional sanctions on Iran because of its nuclear program. The agreement demonstrated that even our sharp differences over Georgia could be bypassed to achieve U.S.-Russia cooperation on another critical issue where we had overlapping interests.

As I reflect on my relationship with Ambassador Churkin, I see several lessons that should inform the U.S.-Russia relationship and relations with other rivals today. First, we should never be afraid or reluctant to engage diplomatically, even amid tensions or sharp differences. Second, even with rivals and adversaries, there is room for cooperation on issues of mutual interest. We should be open to circumstances when we can work diplomatically with such nations, especially if skilled and insightful diplomats such as my former colleague at the UN represent them. It is profoundly in our national interest to do so.

Zalmay Khalilzad was the U.S. ambassador to the UN. He is the author of The Envoy: From Kabul to the White House, My Journey Through a Turbulent World.

Image: Vitaly Churkin receives the Order for Services to the Fatherland. Kremlin.ru