Is Civilian Control of the Military Eroding? 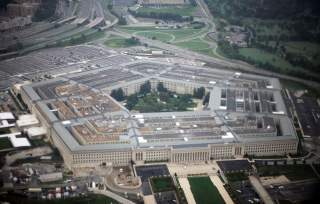 This week, the independent and Congressionally-mandated “National Defense Strategy Commission” released its assessment of Trump administration’s military strategy. Led by former Defense and State Department official Eric Edelman, who worked for both parties through a long government career, as well as retired Admiral Gary Roughead, a former chief of naval operations, the report issued a clarion call to action, in light of the global security environment that the authors deemed the most dangerous “in decades.” The other commission members were also all well-known and well-regarded individuals with backgrounds primarily in the defense and intelligence worlds—making it no huge surprise that they called for continued real growth in the U.S. defense budget (even if President Donald Trump, and many incoming House Democrats as well as Tea Party Republicans, may now have different ideas).

There was however one counterintuitive finding in the commission’s report. It described relations between the uniformed military and civilian leadership of the Pentagon as somehow out of whack. To quote from the executive summary: “…civilian voices have been relatively muted on issues at the center of U.S. defense and national security policy, undermining the concept of civilian control...It is critical that DOD—and Congress—reverse the unhealthy trend in which decision-making is drifting away from civilian leaders on issues of national importance.”

While there are probably shards of wisdom in this advice, the larger message as well as the specific phrase of “undermining the concept of civilian control” seems seriously overstated. Yes, due to internal Trump administration dynamics, it has taken too long for Secretary of Defense Jim Mattis to build his team of civilian colleagues, but this does not mean that today’s military Joint Staff or Combatant Commands somehow run roughshod over their civilian leadership.

Indeed, on major issues of the day, there would seem to be close consultation and close alignment between civilian leaders at the Pentagon and the various elements of military leadership under Chairman of the Joint Chiefs Joseph Dunford. Start with the big picture: the top argument in the January 2018 National Defense Strategy that the Commission has just evaluated was that Russia and China are the top threats to American national security. There was lockstop accord on this finding, not only across civilian and military divides within the Department of Defense, but across most of the American national security establishment writ large, including the Congress. Indeed, there may be too much consensus, not too little consultation, on some aspects of this challenge. For example, a questionable policy like our intention to keep expanding NATO remains almost sacrosanct within much of the defense community, when it deserves more debate.

On North Korea policy, it was the top civilian in the government, President Trump, who turned U.S. policy upside down in 2017 and 2018, first engaging in brinkmanship with North Korean leader Chairman Kim Jong-un, then meeting him in Singapore in a dramatic attempt at détente and negotiated denuclearization. Throughout it all, defense officials sought to be the steady and calm hands on the tiller, including General Vincent Brooks in Seoul (who just gave up command to General Robert Abrams) and General Dunford, as well as Secretary Mattis and civilian experts with whom I have frequently spoken throughout this process. One sensed unity of effort at the DoD level, even in light of great turbulence at the White House.

Or take some top-tier issues from the broader Middle East. On Iran, the big policy news was President Trump’s decision to pull the United States out of the 2015 nuclear deal, not internal DoD debates over whether or how to do it. On Afghanistan, by all accounts, Secretary Mattis, together with General Dunford and General Nicholson (then the field commander), worked hand in hand to advocate for adding more American troops last year, ultimately persuading a reluctant Trump (at least temporarily). Most civilian experts who work that file at DoD that I know agreed with them, in broad brush at least. On Syria, there is also no perceptible pitting of General Votel at CENTCOM, together with General Dunford and his Joint Staff, against civilian expertise within the Department. Again, the basic parameters of policy have been set by the White House—where Trump, like President Barack Obama before him, prioritized the defeat of ISIS and otherwise sought to minimize the American role. The Pentagon, at civilian and military levels, has fallen in line with this guidance. Thus, going down the list of major strategic decisions, policies and crises, it is hard to see where this purported civilian-military divide is causing the nation major problems.

To be fair to the Commission report, it specifies that its main concerns relate to global management of the force—decisions on when and where to send aircraft carriers and other key U.S. military assets. But such a specific issue, while worthy of debate and discussion, would not seem to warrant such broad, sweeping language, especially given the general caution with which changes have been made to date.

The Commission could have made a more compelling critique of military leadership if it had looked at the budgets of the individual military services. To date, they have shown no major apparent change due to the Mattis/Trump strategy of focusing on great-power competition. Plans remain largely as they were before Trump came into office—it’s just that his larger budgets have allowed the services to buy a bit more of everything, rather than reflecting any significant change in strategy. With budgets now likely to plateau or even decline a bit, the Commission might have made a larger contribution by telling us how to prioritize. In their future writings and testimonies on the subject, they should concentrate their attention accordingly, rather than reprise the false issue of a civilian-military chasm.