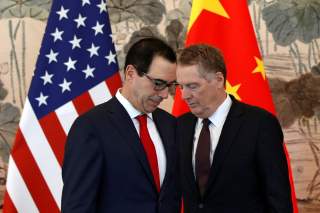 Kiron Skinner, the Director of Policy Planning for the U.S. State Department, ignited a controversy last week when she analogized Sino-U.S. competition to a clash of civilizations. There has been a good deal of pushback from international relations academics (here, here). Many noted that Samuel Huntington’s famous thesis (article, book) has not actually been born out much. There have not in fact been wars since his writing that have been as epochal as the “civilizational” label would suggest. Moreover, Skinner’s particular comment that China will be America’s first “great power competitor that is not Caucasian” sparked a lot of controversy that “civilization” was being used as rhetorical cover for the Trump administration’s persistent flirtation with white nationalism.

But one problem in all this not yet pointed out is how poorly Huntington’s model actually fits the dynamics of conflict in East Asia. Huntington’s argument got its greatest boost from the post-9/11 war on terrorism. There, religious conservatives—on both sides ironically—saw the conflict as much as a millennial clash between Islam and Christianity, as between the United States and rather small, if radical, terrorist networks. Huntington’s book was even re-issued with a cover depicting a collision between Islam and America. But in East Asia, the thesis really struggles.

The central variable defining Huntington’s civilizations is religion. This is why the argument feels so intuitive for the war on terror, where religion is a powerful, obvious undercurrent. But in East Asia, religious conflict was never as sharp as in the West, Middle East, and South Asia. Nor has religion historically defined polities in East Asia as sharply. Confucianism and Buddhism were obviously socially influential, but they generated nothing like the wars of the Reformation or the jihads of early Islam.

So while much of the world is coded by Huntington via religion, he struggles to use that in East Asia. Instead, he falls back on nationality mostly—coding China, the Koreas, and Vietnam as “Sinic” and Japan as “Nipponic.” He also suggested a Buddhist civilization in southeast Asia, as well as Mongolia and Sri Lanka.

However interesting this may be, all this is analytically pretty messy. First, the most obvious religious benchmark for Huntington to use in East Asia is Confucianism. Whether coded as a social philosophy or religion, there is little doubt that Confucius’ writings had a huge impact on China, Japan, Korea, and Vietnam. But if Huntington had done the obvious and tagged a Confucian civilization including these four players, he would have made the laughably inaccurate argument that those states are natural cultural, religious and civilizational allies.

In reality, of course, there is a lot of traditional national interest-style conflict—the kind Huntington says has been replaced by civilizational bloc-building—in the Confucian space. China and Japan are obvious competitors, and the East China Sea is a serious potential hot-spot now. The Koreas are still very far apart ideologically, and neither feels much affinity for China or Japan. Furthermore, China and Vietnam also sliding toward competition in the South China Sea.

So Huntington is stuck as his model does not work in northeast Asia. So to save it, he carves out Japan as a separate civilization defined by nationality, not religion, with little explanation. He then lumps the Koreas and Vietnam under a Chinese-nationality defined “Sinic” civilization, which, in my teaching experience, Korean and Vietnamese readers find this to be either typical American ignorance or vaguely offensive.

The Buddhist civilization of Southeast Asia struggles to be defined analytically too. Do Mongolia, Thailand, and Sri Lanka have enough in common to be put together? Why isn’t South Korea, where Buddhism was long influential and still very much alive, put into this civilization? Do these states communicate or cooperate with each other in any way that may reasonably be defined as “buddhistic”? The answer is almost certainly that Huntington did not know or really care that much—likely as he did not know what to do with non-Arab Africa, so he just labels it all one “African” civilization and moves on.

The thesis was really designed to explain the collisions in southeastern Europe (the Balkan wars of the 1990s) and in the Middle East between Muslim-majority states and their neighbors. It is in these regions and about these conflicts where Huntington’s thesis continues to be most persuasive when taught. In East Asia though, it falls down pretty quickly. The units of analysis (civilizations) are not constructed in that region around the variable (religion) which Huntington uses elsewhere, and the conflicts of the region have little to do with religion, because organized religion was not as influential in East Asia’s political past as it was elsewhere.

So if this is to be the Trump model for U.S. foreign policy—and it certainly seems to be the administration’s preferred mode to address Islam—it will lead to bizarre predictions and behaviors. The “Confucians,” Buddhists, and East Asian “non-Caucasians” are not going to ally against the United States. China, for all its “Sinic” cultural difference from the West, is also deeply influenced by Western political thought—most obviously Marxism-Leninism, and, today, capitalism.

We may well fall into a cold war with China; prospects for a benign, or at least transactional, Sino-U.S. relationship are narrowing. But there is no need to over-read that competition as an epochal civilizational clash and thereby make it worse and more intractable. That kind of thinking applied to 9/11 lead to wild overreaction, as American policymakers saw Salafist-jihadist networks as a far greater threat than they were. If we do that with China, which really is very powerful, America’s competition with it will be that much sharper and irresolvable.