A Clear and Present Danger to Planet Earth: Climate Change 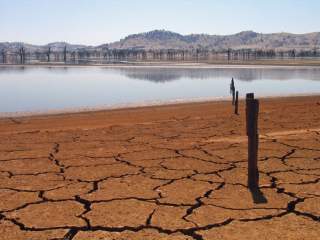 We are facing a new security threat, and, if left unaddressed, it has the potential to kill thousands of people in a single summer. We are talking, of course, about climate change. A new study authored by the British Met Office Hadley Center notes that the chances of extremely hot summers, on par with the heat wave that plagued Europe in 2003 and killed 70,000 people, have increased tenfold in this century.

While the deadly 2003 heat wave may have been the most severe in the last 500 years, the world can expect similar ones more frequently. Back in the early 2000s, Europe could expect extremely warm summers once every fifty years. Now, we can expect them every five years.

This is not an exaggeration of risk, and it’s a direct result of the rapidly warming climate. With 2014 weighing in as the hottest year ever on record, extreme weather events—like the deadly heat waves that hit Europe, and France especially hard—will become much more frequent.

If the West ever faced an armed insurgent group capable of killing tens of thousands of its citizens in a single summer, it would rally quickly and arm the North Atlantic Treaty Organization in its defense. And yet, climate change, which is also human-made and armed with a different but equally deadly weapon gets a response that pales in comparison.

The Defense Department in the United States understands the security threat posed to its human and physical infrastructure, which is why the Pentagon released a roadmap for dealing with climate change. They understand that it’s a human-security issue and that climate change has the capacity to engineer and escalate conflict globally. They are right to call it a threat multiplier. Multiply, it will.

Global instability will be the new norm, as our warming planet will worsen already highly impoverished and hungry populations, exacerbate food and water shortages, generate violent disputes over resources, make fertile the planet for pandemics and usher in a new era of climate conflict and resource wars. Climate refugees will become commonplace. We are already witnessing them in the Horn of Africa, throughout the Middle East and the Gulf States and beyond.

These trends may well trump the smaller actor groups threatening acts of terrorism in unstable regions throughout the world. Climate-induced instability has the capability to create a level of chaos and conflict not yet seen in any of the traditional hot spots associated with European and U.S. intervention.

Countries like Yemen, for example, are running out of water. Sana’a, Yemen’s capital and home to ample instability already, is slated to run out of water in a few years. The entire country will be out of water in a few decades. As the planet warms, this rate of water depletion will increase, leaving Yemen in dire straits and due for mass violence on a scale not yet seen. The fight over territory—and specifically water supplies—will be the focus.

Iraq and Syria are witnessing a similar water war. The Islamic State seized water supplies in the earliest days of fighting and both countries are facing severe water shortages and droughts unparalleled in the Levant’s recent history. While the world missed a chance to help stave off Syria’s drought in the run-up to the civil war, we mustn’t miss another chance to help countries teetering toward climate conflict.

This is why Western allies must lead like never before, rallying the same kinds of war-ready resources—financial, physical and human—that nations fast-track during wartime, except this time it’s for a global fight, a global war against our warming climate. Time is of the essence as the planet is projected to warm anywhere between 4 and 10 degrees within the next century. There is no more clear and present danger capable of destabilizing the world around us. The time to act is now.

Des Browne is the former U.K. Secretary of State for Defense. Michael Shank is the director of media strategy at Climate Nexus and adjunct faculty at George Mason University's School for Conflict Analysis and Resolution.