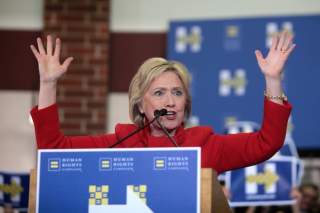 If anything was clear from Hillary Clinton’s appearance at the “Commander in Chief” forum on NBC, it is that she cannot escape her past.

During her first appearance at the same venue as her Republican opponent Donald Trump—they were separated only by a commercial break—Clinton hoped to demonstrate that she was the only candidate qualified to be president. Instead she showed that even a typically softball interviewer like Matt Lauer could put her on the defensive about her emails and foreign-policy record.

“I make no excuses for it,” Clinton said of her use of a homebrew private email server while secretary of state, as she proceeded to make a variety of excuses for it.

Any time Clinton spends explaining her unconventional email arrangement is not to her advantage. This is especially true amid growing concerns about how securely classified information was handled and whether information that should have been transparent to the public was deliberately concealed.

In order to protect her communications from the American people in cases where they had a legal right to know, did she expose them to the prying eyes of the Russians and the Chinese? This basic question seems to be deepening public concerns about her trustworthiness and helping Trump return from the dead in national polls.

The most embarrassing moment was when Clinton appeared to equate a stray Trump comment to a shock jock with her vote to authorize the Iraq war. She again acknowledged her vote was “from my perspective, my mistake.” But a few minutes later she added, “[Trump] supported it. He told Howard Stern he supported it.”

Media fact-checkers, enraged by Trump’s serial exaggerations and tortured relationship with the truth, are on Clinton’s side on this one. Many journalists chastised Lauer for not pushing back when Trump claimed to have opposed the Iraq war before it started when it was his turn to speak, including a few who supported the war themselves.

But this reading really gives Clinton more of a pass for being a liberal hawk who abetted neoconservative foreign policy mistakes while adding a few of her own than it is an exercise in holding Trump accountable. There is no real equivalence between even the most hawkish thing Trump said before the war and her actual vote to launch the war.

On the anniversary of 9/11, Stern asked Trump—then a businessman who had turned down a third-party presidential run and wasn’t actively involved in politics—if he supported invading Iraq and in that context he replied, “Yeah, I guess so. I wish the first time it was done correctly.”

That is the smoking gun on Trump and Iraq that is somehow supposed to compare to Clinton’s vote for the war. It is legitimate to point out that Trump has embellished his prescience on Iraq and especially Libya as he argues that this proves he possesses superior judgement.

Yet while Trump was making mostly noncommittal statements, Clinton was on the Senate floor explaining her vote for the war in detail. Trump was, in fact, on the record against the war before either member of the 2004 Democratic ticket, Clinton herself or the vast majority of Republicans.

Clinton voted for regime change in Iraq, saw the results and proclaimed them a mistake, and then pushed for regime change in Libya while secretary of state, achieving similarly disastrous results. The only lesson she appeared to have learned is that it is politically costly to put American boots on the ground.

Even if Trump arrived at his position that regime change without a plan for what will come later brings chaos and terror only last week, that looks pretty good compared to Clinton’s results.

It wasn’t all bad for Clinton. Trump’s time in the spotlight yielded more answers that can easily be featured in attack ads. While he is groping toward a foreign policy of building a strong military to be used sparingly, it remains a work in progress, if not an incoherent mishmash of conservative think-tank defense spending requests stitched to some quasi-realist pronouncements.

Questions remain about Trump’s temperament and grasp of details. And he can’t seem to stop himself with the praise of Russian President Vladimir Putin.

But Clinton hoped to ace the commander-in-chief test in her first outing and did not. Her actual experience does not make that much more compelling of a case than Trump’s lack thereof.